Marshall Ian Key's excellent novel Living Dolls introduced us to a pair of dolls, which with a few minor limitations, could become any willing woman you could name. While the doll's origins remain a mystery for now, those dolls weren't the only pair of them out in the world. Two Dolls Lost tells the story of dolls Peggy and Linda, accidentally discarded by their owner and left to fend for themselves. While they have their abilities as Living Dolls available to them now to use as they see fit, Peggy and Linda also have the problems of being nave teenagers alone out in the world. How they use their abilities to create their own lives, while affecting the lives around them, will make you wish for a pair of dolls like them for your very own. 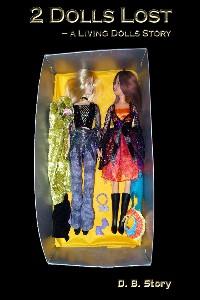 D.B. Story has taken an interesting premise and written a well-crafted story around it. For any fan of sci-fi, this is an intriguing book, which still manages to weave romance into the plot. I will eagerly be watching for any forth-coming works by D.B. Story.

"A proper doll should be life-size," he sneered.

"Those are called 'My Size' Barbies," Amy said, with the superior air of knowing something the boys didn't. She'd wanted a My Size Barbie for just about forever.

"Life Size," Todd insisted, not wanting to admit that there was anything a girl could know, especially his sister, that he didn't already know too. There was more than a simple sibling rivalry in their family, and he knew it was about to get very much worse for him, and was trying to hold on to any advantage he still had.

Todd, embarrassed in front of his peers by this, went over to the pile of adult clothing treasures Amy'd piled up, making a move to push them over the side.

"Don't do that!" Amy screamed.

When she didn't, he drew his foot back, as though to kick the pile off the mound.

"Say it," he warned, trying to keep is balance on only one leg.

"You wouldn't dare," Amy insisted, not believing her own words.

"Wouldn't I?" Todd said, struggling to keep his balance as he drew his leg back even further.

Todd, knowing he had to win this, swung his foot forward towards the pile.

"Life Size!" Amy shouted, trying to stop him, although it was already too late.

And suddenly, instead of a doll in her hand, there was a naked girl, maybe a year older than she was, standing right next to her.

Amy screamed. It was the piercing tone of a surprised young girl's scream. The kind that goes through your head like an ice pick from one ear to the other, on its way to shattering fine wine glasses.

A moment later, responding to Amy's scream, the new girl screamed just as loudly. And then Megan screamed in sympathy, although not yet knowing why.

Distracted, Todd's leg swung unstoppably through the pile of old clothes and shoes, causing him to lose his balance completely, and start tumbling down the slope.

Chris, startled by the new girl, Todd's fall, and three women screaming, lost his balance and fell off the other side.

Megan's eyes were as large as saucers, looking at what just had happened.

And the new girl stumbled a bit, as she took a step towards Amy.

"Get away!  Get away from me!" Amy shrieked, sliding backwards herself in avoidance of the stranger. When the girl extended her hand in a possible gesture of friendship, or just to help keep the young girl from falling off completely, Amy pulled back even further. She didn't know what was going on, and didn't want to know. This had just gotten too weird for words. And Megan was still screaming.

"I'm yours," the new girl said, as Amy's shrieks paused to take another breath.

With that, Amy tumbled backwards as well, sliding in a very undignified manner down the slope. In fact, only Megan made a properly decorous, albeit rapid, descent.

At the bottom, with all the screaming and other shrieking going on, Chris had already taken to his heels. If he got caught here again, his parents would ground him for a year, and he'd lose his place on the baseball team. And if his big sister found out first, he'd owe her more favors than any guy could ever hope to repay. She was always trying to fix him up with her dateless friends, and he still had one more year of high school to put up with her before she graduated. As for her friends, if they couldn't get dates with anyone else, he sure didn't want to be seen with any of them himself.

Todd, torn between waiting for his sister, and hightailing it after Chris, did the gallant thing. He waited just long enough to grab Amy's arm and take off down the path Chris had already blazed. Only Amy's protests, and the digging in of her little heels, slowed him down enough for Megan to catch up. Then they all ran without stopping all the way back to Todd's house, throwing themselves under the big shade tree in the side yard when they arrived, panting as hard as they could.

Soon there was a giggle, followed by another, and then a brief laugh, until they were all laughing uncontrollably at their fright. Even so, nobody dared go back to see what had happened. Surely The Watchman had heard everything, and would catch all of them this time.

It was a full day later when Todd and Amy crept back at sunset, looking for her doll-or in Todd's mind, the girl the doll had become. He'd finally remembered that she'd been naked, very naked, and had a nice start on all those things he'd yet to see-or touch-on any real girl yet. By then, a lot of new trash had arrived, changing everything, and they couldn't find the doll-or the girl. Neither of them realized they'd be seeing the doll/girl, and her friend, again soon enough.