Forest ranger Rex has never been with a man, but his overwhelming feelings toward his best friend are driving him to distraction. After catching Paul in an intimate moment, he flees, but determined to find a way to get his friend in his bed. Paul is a ladies’ man from way back, always making jokes, never serious about anything but his job as a fire fighter. Yet after many years of friendship, he’s surprised to find himself watching Rex cross a room and imagining him naked, under him. But does he really want to make love to a man? Or will he make a fool of himself? A 1Night Stand in the beautiful Caribbean may hold the answer to both their questions. 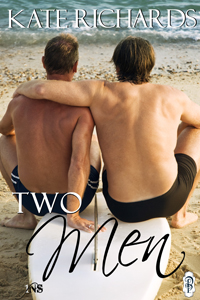 Paul lifted his duffel then stared at the pink sand beach before him. “So I just wade on in?”

“Yes,” the blonde said, sliding into the water and sloshing in their direction. When she arrived at their side, the water hit her lower thighs. At his height it wouldn’t even hit his knees. “If Donny beaches the taxi, it’s a lot harder to get going again than just letting you off here. Is that okay?” She reached for the hand the pilot offered and hopped onto the deck.

“Sure, no problem.” He kicked off his deck shoes, set his bag down, and dropped in, then grabbed his things and faced shore. “But where do I go when I get on land?”

“Just head straight up the beach to the path. You can’t miss it…there’s one building on the whole island.”

He returned their waves and started toward the date that would change his life. I can’t believe I’ve committed to having sex with a man. He would find out whether that was possible. Whether he could approach Rex when he got home rather than just hint. I’ve had a crush on you for years. Want to fool around? Couldn’t sound lamer. But if this one-night stand didn’t get him out of his system, he would do it. Rex would either be horrified and throw him out on his ass or assume he made another one of his jokes.

But he’d have to be clear as the sea around the island. Provided he could follow through. And since all his previous experiences were with women, he didn’t know for sure.

He had one reason to believe Rex might be interested, and it wasn’t much to go on. How long had he watched him jack off on the couch? Hopefully all the way to the end.

Enslaved by an Officer (MM)
Anitra Lynn McLeod
In Shelf
$3.50
Tweets by
sirenbookstrand