Jason Peters is a young widowed father whose son, Tyler, is a precocious first grader starting a new school in the middle of the term. His new teacher is Greg Boucher, a man near Jason’s age who is incredibly attractive. For the first time since his wife’s death, Jason finds himself interested in the possibility of a romantic relationship.

It seems Greg feels the same. At a parent/teacher conference, Jason admits he’s gay, and to his surprise, Greg asks him out on a date. They spend a wonderful evening together, but when morning dawns, Jason realizes things can’t move forward between them unless his son is comfortable with the arrangement.

Will Tyler understand Jason’s interest in his teacher? Or will Jason have to choose between what he wants and what’s best for his son?

The man jogging towards where Tyler and I wait is a few years younger than me. When did I get older than teachers? I wonder, but immediately on the heels of that thought comes the sobering reality -- when I had a kid of my own. Some days I still feel like I’m a teenager; it’s easy to do when I’m at home alone during the day, sitting in front of the computer and working on my latest short story. I’m too young to have been married, to be widowed, to raise a son on my own. I’m still too young ...

Then Tyler comes home and reminds me that, as much as I’d like to pretend otherwise, I’m not.

Mr. Boucher slows as he approaches us. He’s my height, a little heavyset, but young and vibrant, happy ... alive, to be honest, in a way I haven’t seen in anyone in a long time. Not since Lisa. His dark blond hair is neat and trim, which makes me run a hand through my own mess of brown waves in an effort to tame them. When did I shower last? What with moving and working on my new story to meet my own self-imposed deadline, unpacking, getting Tyler settled in, getting him to school, I haven’t really paid much attention to myself. I haven’t wanted to, really.

And suddenly here I am worried about what this guy’s thinking about me.

“Tyler,” Mr. Boucher says with a smile. He holds up an Avengers lunchbox that looks familiar. “Is this yours?”

I’m staring, I know it. Boucher has fair skin, flawless this close, and a thin mouth that crinkles in the corners when he smiles. There’s a faint indentation in one earlobe, a spot for an earring he doesn’t wear to work, I suspect. His hair is cut close to his head, a sandy color that fades to a darker shade at his temples. And he has soft brown eyes, impossibly soft, and kind.

This guy’s a teacher? If I had someone like him teaching me, I would’ve loved going to school. I don’t want to butt in, but there’s no way I’m leaving here without him saying something to me, too. I ask my son, “Tyler, why don’t you introduce us?”

“I told you, that’s my teacher.” Taking the offered lunchbox, Tyler says to Mr. Boucher, “This is my dad.”

Great, I think. Way to make me look like a chump. We’re going to have to have a serious talk about how to be a good wingman when he gets a little older.

Despite Tyler’s tactless intro, Mr. Boucher holds a hand out for me to shake. He has a strong, sure grip, and when he turns those eyes my way, I can’t help but grin. “Greg Boucher. Nice to meet you.”

“Jason Peters.” I hold his hand a second longer than I should, I know, but he doesn’t try to pull away and it’s hard to let go myself. Before the moment can draw out awkwardly between us, I let go and tuck both hands into my pockets again. “Since he got out of class, you’re all he’s been talking about.”

Beside me, Tyler groans. “Dad.”

Mr. Boucher laughs. “I think he’s really going to like my class. I haven’t had one complaint yet. He said you were a writer?”

Now it’s my turn to flush. Even if Tyler doesn’t realize it, he got me back for anything I might’ve said that embarrassed him. “I’m working on something,” I mumble, hoping Greg doesn’t ask for details.

He must see I don’t want to divulge more because he claps his hands and turns to Tyler. “Did you bring home all those papers for your dad to sign?”

“I’ve got them right here.” I heft Tyler’s book bag higher onto my shoulder so Greg sees it and joke, “It’s his first day of school and I’m the one who gets all the homework.”

“They’re just the standard forms,” Greg says with a smile. “I’m sure you’ve been through them all before. School handbook, upcoming dates you need to know about, things like that. We have a plantation field trip at the end of the month and our annual Career Day in April. It’s all there. Oh! And there’s a parent/teacher conference on Thursday, if you and your wife are interested.”

Again, I ignore the subtle reference to Lisa. “Thursday? What time?”

“Seven to nine,” Greg explains. “It’s the third one this year, so I’m not really expecting any parents to show up -- I’ve talked to all of them by now, and none of my kids are doing bad enough to warrant another visit. But if you’d like to stop by, say hi, see your son’s classroom, and go over the curriculum with me? That would be great.”

Thursday. It’s fairly short notice, but if I say it’s something I have to go to, I’m pretty sure I can convince my sister Dawn to babysit Tyler for the night. She has two kids herself, twin daughters three years older than my son who dote on their only cousin, so if I want to be really manipulative, I can ask in front of them and Dawn won’t be able to say no. It’s only for two hours, right?

Two hours alone with Greg Boucher. Something in the pit of my stomach flutters nervously at the thought. “Sounds good. I’ll be there,” I promise. 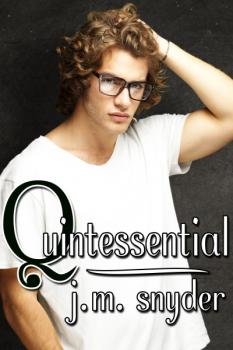