In the second installment of The NADIA Project, the potential stakes are raised even higher. The lab where Nadia was built is no more. But when The Pinnacle strikes back at the government agencies trying to crack its secrets, a horrible truth emerges: The evil cabal of kingmakers is still building living weapons of mass destruction somewhere on the globe.

Jon Daniels and Nadia Velasquez must find the lab and stop it before a new wave of terror erupts across the world. In order to succeed, though, they must get through The Pinnacle's most deadly weapon: Jenna Paine. All who stand between evil and the innocent are two ancient warriors, a misfit genius, a rogue FBI agent, and a living antimatter bomb named NADIA. 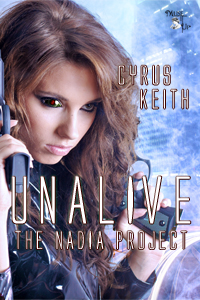 Jenna sat on a plastic chair in the cramped office, her hands zip-tied behind her back. She couldn't lean back, so she sat as straight as she could to ease the discomfort. No one asked her any questions. They barely turned their heads her way, but she could see she was being watched closely. There was no chance of getting out of this room on her own. She remembered her training, so long ago. Timing. It's all about timing.

Five men were in the room with her, all loaded for bear. Their uniforms and weapons were Czech Army issue, but they spoke American English. Special Forces, then. Or terrorists. The fact she was still alive pointed toward the former. Their leader was on the phone in another room, and occasionally she heard his voice rise, although she couldn't quite make out what was said.

Her pistol sat on the desk, ten feet away from her. She carried no other weapon aside from her own wits and body.

She thought about striking up a conversation with them, but at this point, the less anyone spoke, the better things would be. There would undoubtedly be an interrogation soon enough, and she wasn't sure what rules of engagement applied to her, if any.

She'd already told them that she was the NADIA, hoping to take them off-balance, and to make sure they thought they had who they were looking for. Now, she wasn't so sure she hadn't overdone it.

For a minute, Jenna considered using her natural charm to get out of this. It had worked for her on numerous occasions, and every time she'd tried it, it got her exactly what she wanted. This time, though, flirting was definitely out. She didn't know if there existed an opposite of Viagra, but if it did, these men had taken overdoses of it. Two soldiers played cards over a small table in a corner. The other two sat out of range of her feet, with machine pistols at hand. Their watchful gaze never wandered from her eyes. She saw no opening whatever, and so had dismissed that option, at this point, anyway.

So. We wait. And when the moment comes, I make damn sure I'm ready.

The door opened to the other office, and the sergeant in command strode through. The way he glared at Jenna, she wasn't sure if he would shoot her dead on the spot, or just settle for beating her around a bit. She met his eyes with her own steady gaze, and let no expression betray what she was thinking.

"I say we grease her," he growled. "Copper Wire said she's red-hot trouble with a short fuse." Bending down, he put his hands behind his back. His eyes could have bored holes through stone. "That is, if she is who she says she is."

He stepped back a couple of steps. "Martin. Pop a cap in her."

One of the soldiers at the card table stood. Jenna felt an iceberg form in her stomach. Is this the way it ends? The sergeant held up a hand, and Martin sat down again. The sergeant stepped back in and cupped a hand under Jenna's chin, bringing her gaze back to meet his. His smile was unpleasant and smug. "Now I know you speak English. For the record, your look was priceless." He stood away again. "Don't worry; I won't ask you anything. Your business is none of mine, even though it cost two brave men their lives."

He turned and spoke to the men. "There's a hop leaving from Ramstein Air Base tomorrow morning. Let's saddle up. She's going back to the States. Copper Wire can decide what to do with her."
Ten minutes later, they hustled Jenna downstairs and into the back of a step van. It might be some time before her opportunity came. But when it did, God help whoever stood in her way.