Mai’s never quite fit in, no matter where she was. The humans don’t know she exists, and her own people hate her for nothing more than being what she is, but there’s always been him. Ryan has never cared about who she is—what she is—so long as he can call her his own.

For years they’ve kept their dalliance a secret, hiding it from the only people in their world that can execute their laws: The Council. But secrets have a way of coming out, and this particular secret has dire consequences. Will they face the consequences of their forbidden relationship together—or will discovery drive them apart?

Ryan gave her a gentle nod and another smile. Mai drew her bottom lip between her teeth, grinning lightly at him. Ryan felt a nice little rush of desire wash through him that he knew she felt, too. He couldn’t help it. Mai was gorgeous, with her slight but strong body, her unnaturally blue eyes, full lips to die for, and head of platinum hair that framed her face perfectly.

Mai lowered her voice just enough Ryan could still hear while Marcus had to strain. “See you later?”

His response was nothing more than a silent wink. Mai smiled, but the action faded the instant she looked at Marcus. She departed shortly after giving him a loud and obnoxious scoff.

Ryan leaned back in his rolling chair and watched as Mai disappeared down the hall. He wasn’t above ogling, and his partner could easily see. Obviously annoyed, Marcus was sure to flag down a passing officer so Mr. Ayers could be processed and he could speak to Ryan in private.

“Seriously?” Marcus’s derisive tone brought Ryan back into the moment.

“What?” he asked with a chuckle.

“You know the rules, man.” Marcus shook his head disappointedly at his old friend. “We’re not supposed to interact with her kind.”

“Bounty hunters?” Ryan teased. He received a glare from Marcus and sighed, sitting upright once again and propping his elbows on his desk. “I know, I know,” he admitted. “But the Council isn’t going to find out.”

Ryan was only joking with his friend, but he knew that was part of what angered Marcus so much—Ryan seemed incapable of understanding the magnitude of what he was doing.

“You’re risking life in prison, or death.” Marcus couldn’t keep the edge from his tone. “For something like her? Really?”

Eying his partner warningly, Ryan chose to ignore the question and went back to his paperwork. He understood why Marcus was nervous—really, he did—but he didn’t care. The truth was, he wasn’t frightened of Mai, or her kind. And he definitely wasn’t scared of the Council. 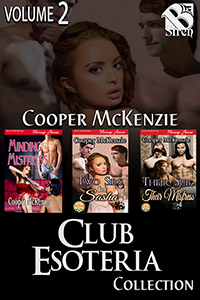