Under The Officer's Command

What Major Adrianne Carson wants, she gets, and what she wants is the sexy new Corporal recently transferred into her unit. Corporal Anderson is the perfect soldier; he is devoted to the army and has a high respect for its policies, including its pesky no fraternization policy. But can the Corporal resist the Major when she kicks her seduction efforts into high gear? 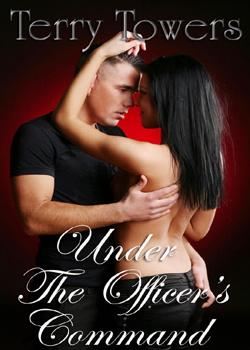 Under The Officer's Command

Major Adrianne Carson watched from her office, as the men and a couple of women from her unit lined up and stood awaiting their daily inspection. There was one particular man in the group that caught her interest; he'd caught her eye the moment he was transferred onto her base and into her unit.

Corporal Kyle Anderson. He was a fine piece of ass if she ever saw one. Twenty-eight years of age, tall - his records listed him as being six-foot-two - broad shouldered, nice firm ass, short dark hair, grey eyes and strong, chiseled features.

He was as sexy as they came.

And he had a high moral standard, with an intense love for the army. That was her problem. He was just too good of a soldier. He followed the rules as if they were the gospel. Usually that would be great with her, less stress than having to deal with an unruly, disrespectful soldier, but in this case she wished he was just a little more inclined to bend the rules.

Well... one rule. That pesky little rule that said there was to be no fraternization between the officers and the enlisted. It wasn't like she wanted a relationship with him; she just wanted to fuck him.

Was that so bad?

Usually her soldiers were pretty easy. She'd approach them and they'd be overjoyed at the idea of having a little fun with their commanding officer. It wasn't as if they were doing her a favor; if anything she was doing them a favor. Fuck, it was the wet dream of most enlisted men to screw their CO. It just happened to be an added bonus for them that she was a good-looking woman.

Adrianne took pride in her body; she never missed a day at the gym - the army made sure of that - so she had a nicely-toned hourglass figure, golden skin, long dark hair and eyes to match. She wasn't really cocky or conceited about her position and physical appearance, just confident. She had to be to be considering her status in the army. Well... maybe a little cocky.

She hadn't approached Kyle as of yet. However, she planned to do so in about ten minutes’ time. She'd left orders with the Lieutenant to send him up to see her once their inspection was complete. She just had to be delicate with him, make him see that it was a good idea - beneficial for both of them.

If not... Well, she was determined she was going to have him one way or another.

As if he could sense her staring down at him, his gaze moved from straight ahead to up in her direction, on the second floor of the main office. His eyes caught hers for a moment before shifting forward again. A shiver worked its way down her spine, ending in a pulsating between her legs. If a glance and just thinking of him could get her this aroused, then she could only imagine how it was going to feel to have that beautiful body of his over hers, thrusting hard into her. Her pussy clenched at the thought.

With the inspections now completed, and as usual there were no problems with Kyle - as far as she could tell - she watched the Lieutenant order him up to her office. He nodded, looked up towards her again, and caught her gaze a second time. Another shiver of anticipation shot through her. She held his gaze until he turned his eyes away and began jogging towards her building - and her.

Little more than a minute later a knock sounded on her office door. Adrianne rushed over to her desk and perched herself on the edge, trying to look official, yet sexy. She hated that she had to have her hair pulled back tight, in a severe-looking bun, she felt her long raven black hair was one of her best features.

"Come in, Corporal," she called out.

Heaving a heavy sigh, Kyle opened the door to the Major's office. He hadn't had much interaction with Major Carson and he preferred to keep it that way. From his understanding Major Carson was a major ball-buster. He supposed that you would have to be in order to become a female major at such an early age. He would have guessed she was in her late twenties or early thirties.

Despite the formidable look her uniform gave her, he suspected that in a normal out-of-work setting she'd be a stunning woman. Whenever he caught a glimpse of her around base, he found himself highly aroused. There was something about the power, the confidence and slight arrogance of her demeanor that had his cock doing somersaults simply by thinking about her.

She's an officer. Smarten up. His cock ignored him, swelling up and standing to attention, giving her a full salute.

Kyle always made sure his performance was nothing short of perfect. He loved the army, believed in the army and everything it stood for. All the men in his family were in the army. It wasn't just a job for the Anderson men, the army was life. So to be called into the Major's office was a little disconcerting.

"Corporal Anderson. Sit down." she commanded motioning towards the chair in front of her, before he even had an opportunity to properly greet her.

Fuck. It must be as bad as I was suspecting.

"Of course. Thank you, Major." Making haste he sat in the chair to which she directed him and looked up at her. Being so close to her, he could smell the scent of rose and lavender coming from her. So feminine, so sensual. Without meaning to, but not being able to stop himself, his eyes moved down and then back up the length of her body.

Damn, can she ever fill out a uniform!

When his eyes met hers again, the stern look in her eyes had turned to something else... lust? And a soft smile had spread across her lips. Then he blinked and she was formal and all business once more, making him doubt the lustful look was even there to begin with.

Reaching behind her, she snatched up his file and flipped through it. "You're not married?"

Said in the same formal tone, while examining the contents of his file, "Fuck buddy?"

What? Kyle frowned. Did she just ask if he had a fuck buddy? What the fuck? Why would she want to know that?

"I'm sorry Major, I think I may have misheard you. Ma'am," he paused embarrassed to even have her confirm what he thought he'd heard. Surely he'd heard wrong? "Would you repeat the question please?"

Adrianne looked up and caught his confused grey eyes with her dark ones. They seemed to pierce through him and he felt his cock become even harder. Fuck! Being aroused right now wasn't going to help him.

"I asked if you were engaging in sexual relations with anyone at the current moment."

Kyle knew that a confused looked had to be plastered across his face, but he simply couldn't help it. What did his sexual situation have to do with his job? What she was asking was out of line. Sheer curiosity caused him to answer honestly. "The first and primary thing in my life is the army. Since I've just been transferred to this base, I haven't had an opportunity to meet anyone."

The stern look she was carrying faded and a look of satisfaction came over her features. Guess that was the answer she was looking for, he mused.

"I have an assignment for you Corporal Anderson," she announced reaching behind her and picking up a slip of paper. "I need you to go to this address this evening, be there by nineteen hundred hours and please do be punctual." She handed the paper to him.

Taking the paper and glancing at it, he noticed all that was written on it was an address. No name. No indication as to where this address led, or who he'd find or be doing when he got there. He opened his mouth to inquire further on the address, but then snapped it shut again.

"And this is highly classified. If you breathe a word of this assignment to anyone you will be out of the army so fast your head will spin. Are we clear?"

Are we clear? Was she kidding? How could he tell anyone what the address was for or why he was going there; he had no fucking clue himself.

"Wear your utilities tonight corporal. You're dismissed." She waved her hand at him as though he were a nuisance, and a complete waste of her time.

Confused, he left her office her pocketing the slip of paper. He didn't have to look back at her to know that her eyes were on him, watching him leave. A rush of anticipation ran though him, though he was not sure why.

What was with all the personal questions? Was that her address on the paper? He laughed at himself. That was a ridiculous idea. He decided he was thinking way more into it than was necessary and tried to put the whole incident behind him. He'd worry about the assignment when he arrived at the address tonight.