Under the Seaweed Mask

It sounded like a good idea when Mrs. Harrison suggested it—I take her place for the spa day her husband arranged, and she’d go play golf with her friends. However, when the female massage therapist caresses my girl parts, I’m trapped between accepting my first lesbian experience and revealing my identity to my boss, Mr. Harrison, who watches from the foot of the massage table.

Then my body betrays me, and my arousal makes the decision for me, leaving me with a new dilemma—how to get my mouth on the masseuse’s girl parts. 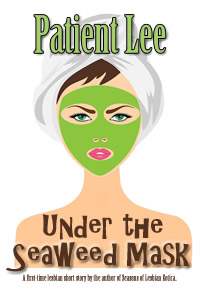 Under the Seaweed Mask

The spa day sounded like a much better idea when Mrs. Harrison suggested it last Tuesday. We'd been working in her office when Mr. Harrison entered without knocking.
"Clear your calendar, Yvette," he said, knocking papers off the corner of the desk. "I need you to go for a spa day next Saturday."
Mrs. H gave him an annoyed look, but his attention was on his phone.
"Why? Do I need Botox or something?" She pulled a mirror out of the middle desk drawer and made faces in the glass. My boss wasn't much older than I was, but she was always worried about Mr. H trading her in for a younger model. She had reason to worry; she was his fourth wife.
He ignored her question. "Jack Rogers just bought a day spa for his wife, Marnie. I told him you'd give them some good publicity." He wasn't looking at her when she shot him a death stare. "Just go. Have fun and blog about it later. Give 'em a quote for their website."
"But I have—”
"C'mon, Yvette. It's not like I'm asking you to march up and down the street twirling a signboard. Go. You'll have a great day. You deserve it. You've been working really hard."
"But, I—”
"Look. Jack Rogers is a good man and a great friend from the club. I'm begging you. Please go. I need his help to swing the stockholders my way on the Clovis project." He hesitated before actually begging. "Please?"
Mrs. H let him stew for a moment while she assessed the situation. "Fine, but you owe me." He left without another word.
"Shit," she said as soon as his footsteps faded from earshot. I tried unsuccessfully not to smile. Mrs. H never cursed. Not around her assistants anyway. "That's the day of the Founder's Day Golf Tournament. I knew he was meeting with Jack Rogers, so I got a foursome together. Dammit." She turned to me. "Now what am I going to do?" She plopped into the leather chair behind her desk and heaved a frustrated sigh.
"I don't know, Mrs. H. A spa day? You'd give that up? That sounds like heaven to me. Better than golf, anyway." I chuckled.
"Leslie, I go to the spa all the time. I don't need another facial. I need to play golf with my B-F-Fs. Why doesn't he ask me before he signs me up for this crap?" She knew the answer to that one as well as I did; he owned her.
"I've never been," I said, but she was distracted. I didn't think she heard me. I turned back to my laptop. A moment later, Mrs. H hopped out of her chair and closed the lid on my computer.
"Leslie. You're gonna go to the spa. In my place."
My jaw dropped. "I can't do that!"
"Sure you can. Just pretend to be me. We look enough alike, and you'll be all wrapped up in robes and towels and stuff. No one will know you."
"Won't Mr. Harrison be upset? What if he finds out? What if—”
"Don't be absurd! Even if someone at the spa does figure it out, you'll report your experience, and the endorsement will come from me. That's all that matters." She seemed convinced, but I was worried about more than fooling Mr. H.
"I've never been to a spa. How would I even know if it's any good?"
"It'll be good. Even if it's bad, my review will be good. You'll just have to remember a couple of details so I'll have specifics." She turned back to her computer screen. The matter was settled.