Derek Meredith lost his lover of ten years, Tad Archer, in a boating accident. Four months later, anonymous phone calls lead him to a weathered bar on the coast, where he runs into an old friend named Kellen who has, in his own words, found something Derek has lost.

Kellen and Derek are both members of a mythical race of sea creatures known as merrows. Friends earlier in life, Kellen had loved Derek from childhood, but a wanderlust filled Derek's heart, leading him to seek life on the shore among humans. Tad was the reason he'd left the ocean behind, and Kellen has never managed to move beyond that rejection.

Back in Derek's life again, Kellen offers him an "indecent proposal" -- a night of passion between the merrows for the return of his lover. But complications arise, among them the fact that without his talisman, an item linking his blood with the sea, Derek is unable to return to the ocean and rescue Tad.

His talisman was given to his lover on their tenth anniversary as a symbol of his love; in exchange, Tad gave him a gold ring. The metal holds mystical properties for those with merrish blood, and Derek hopes that the power of love that resides in the band might be enough to help him rescue his lover ... without having to succumb to Kellen's sordid desires in the process.

NOTE: This story has been slightly modified from the version previously published by Aspen Mountain Press, but the edits don't change the story in any significant way. 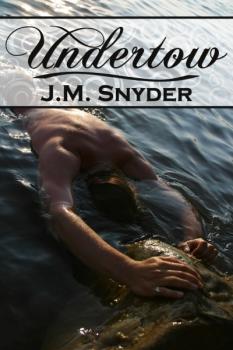 Bitten by Books: 4 out of 5.
"A fantastical story ripe with passion and jealousy ... It intertwines within its pages the feelings some of us have that how we are born is not who we truly are."

Joyfully Reviewed:
"A strange and very suspenseful story ... I was drawn in by the suspense and kept on the edge of my seat until the end. While I enjoyed this story, I feel that the suspense overshadowed the romance ... Still, if you’re interested in the paranormal and learning about unusual legends, you will like this book."

Literary Nymphs Reviews: 3 out of 5.
"The characters were believable, and you find yourself rooting for the underdog and hoping he can find a way regain what was his once more. Overall it was an enjoyable read."

Rainbow Reviews: 3 out of 5.
"Undertow is caught between two worlds, the romantic and the dark paranormal ... I recommend this story for its exciting, imaginative premise, and for the boldness of the risk Snyder takes in marrying two genres."

Review by Frost: 4 out of 5.
"A complex novel with a roller-coaster ride of sensuality, expressed between Kellen and Dere as young merrow friends, Tad and Derek in a more mature, long-term relationship, and newly Kellen and Derek in a tug-of-war with the high stakes of Tad's survival, Derek's love, and Kellen's lust."

"By Mananan," Derek said, "you're the last person I expected to find waiting for me here. So you're the one who was calling me? Why didn't you just say so?"

A faint smile toyed around the edges of Kellen's lips. "Would you have shown up if I had?"

Reaching for him across the table, Kellen's long, thin forefinger stroked the back of Derek's hand. The touch was ticklish but Derek didn't pull away. He watched, mesmerized, as Kellen traced runic patterns onto his skin, and remembered those fingers elsewhere, smoothing along his chest, curving between his legs. In a distant voice, Kellen whispered, "We were more than friends, once. If you remember."

Derek jerked his hand from under Kellen's, then ran it through his close-cropped hair to play off the gesture. "We were just kids then."

"There is nothing childish about the way I feel for you," Kellen replied.

Is, feel. As in time had not yet dulled the edge of Kellen's affection for him. This was why Derek would have never agreed to meet the man. He had never returned Kellen's feelings, not to the extent his friend hoped for, and for that, Derek was sorry. But his heart belonged to Tad; the moment he met the man, the rest of his old life -- his old friends -- had fallen away.

When Kellen's hand stretched out for him again, Derek moved his hand into his lap, beneath the table, out of reach. "No, I ..." He sighed, suddenly so damn tired. "Kellen, I can't. I'm --"

With someone, he almost said, but he stopped himself before the words were free.

There was a sadness in Kellen's voice when he asked softly, "How long has it been?"

"Four months," Derek choked. He ran a shaky hand down his face as if he could wipe away the pain that tore him up inside. "Not a day goes by I don't miss him. You just don't know --"

Derek glanced up and for a brief moment, saw his own pain mirrored in Kellen's eyes. Then his old friend cleared his throat, sat back, and the light in his eyes turned cold, calculating. Down to business. Taking a deep breath to pull himself together, Derek asked, "So what's this about finding what I lost? I don't ..."

Kellen stared at him, the ghost of a smile on his face. Derek struggled to rein in his thoughts -- he wanted to vault across the table, throttle the man opposite him, demand answers ... but that slight grin said it all. Almost dreading the reply he might get, Derek asked, "Is he ...?"

"Alive, yes," Kellen conceded. "The question is, what are you willing to do to get him back?"