John Dornbrook is forty-nine years old. He's been doing the same job for fifteen years and hates it. But when he’s laid-off, it hits him hard and his world turns upside down. When he meets Hollis Lombard, his neighbor’s grandson, the unexpected happens.

Hollis Lombard is determined to get John out of his funk, so he offers to take him on a summer road trip. They head out west in search of adventure, but John is touchy and lashes out easily. Hollis, aware of the attraction between them, doesn’t want to take any chances which could hurt their budding friendship.

It's all a frightful muddle, and it remains to be seen if they can overcome their issues in time to reach their final destination. Will the journey be worth it? 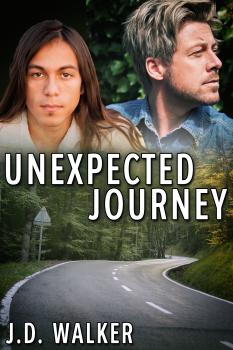 I didn’t return to our motel until five hours later. I’d walked the waterfront, then ended up at a gay bar where I fended off the advances of drunk, barely clad men, wishing I’d not been such a fuck-up with Hollis.

Who was I to think I was such a great catch anyway? Did I have the right to force choices on him or make decisions on his behalf just because I thought they made sense in my world? I was such a hypocrite. Here was a man who’d been through hell and had come to terms with himself and his existence, and he’d only been trying to protect my sensibilities. Maybe he was right. It was too soon, or I was getting carried away with the moment. But I couldn’t deny the draw I felt in his presence, and the attraction was real. I needed to apologize. Again. I’d been doing that a lot, lately.

I took a cab back to the motel and asked the guy at the front desk for a spare keycard to the room. He made me pay him ten bucks, the greedy bastard, before he handed it over.

As quietly as possible, I unlocked the door and stepped inside. Hollis was fast asleep in the fetal position on top of the blankets on the bed I’d claimed as mine. He wore one of my T-shirts, and I could see dried tears on his cheeks.

I leaned against the door and felt my heart flip over. He looked so vulnerable there, and I wanted to keep him safe and guard the innocence he still seemed to retain after the shitstorm of his childhood. I soundlessly grabbed my bag and walked into the bathroom, shutting the door so I wouldn’t disturb him as I showered.

Once I was cleaned up, I strode back into the room, set the bag near the TV, and sat on the bed next to Hollis. I gently stroked his cheek with my index finger, and his eyes fluttered open. When his eyes finally focused on me, they widened before he sat up and launched himself into my arms, squeezing me tight.

I kissed his forehead which stopped him mid-sentence. He pulled back and stared at me. “Where were you all night?”

“Walking around, mostly, then when I got thirsty, I went to this gay bar and almost wished I’d worn a chastity belt, the way they were pawing at me.”

A surprised laugh burst out of Hollis, and he pressed his head into my shoulder. “I don’t blame them. You are one hot piece of ass, John Dornbrook.”

I rearranged our bodies so my back was against the headboard, and Hollis was in my lap, snuggled up close. “So why are you being difficult about this?”

He grasped one of my hands and played with the fingers. “Because it’s almost too good to be true, and I don’t want to lose you, after I just found you.”

“You’re saying a lot with those words, Hollis.” I stroked his hair, smelling of dried sweat and smoke from the night before. It was ambrosia to me.

“I know, and that’s why I didn’t want to push. I’m thirty years old, and you’re this experienced older guy going through a hard time and I --”

It was time to get to the heart of the matter, so I cut him off with a kiss.