For many women, having a handsome, pleasant boss is a plus; having two is twice as good. But for Kim Ryan, two gorgeous bosses is double the distraction in her job as an architect at D & K Associates. When Kim comes across the 1 Night Stand service she hopes indulging in the fantasy that haunts her—making love to men who resemble both her bosses—will quell her improper dreams. Best friends and business partners Jack DeWitt and David Kiyomasa never could understand the sexual attraction to one another that hit them out of left field. But they enjoyed the best of both worlds as they studied then worked toward opening their own architectural firm. Neither expected the decision to add a residential design department to their successful business would bring Kim Ryan into their offices and dredge up odd dreams of another time and place—a place in feudal Japan where they shared a passion that consumed them whenever she was around. 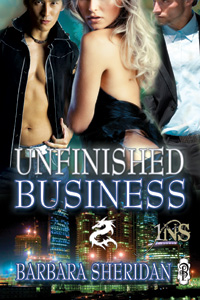 She was sure the deities laughed.

Taking a deep breath, Kim pulled herself together and got up. She headed to the guestroom. Jetlag was still biting her in the butt and she had enough time to take a quick nap before she had to head out to the Castillo Hotel complex on the outskirts of Tokyo. If anyone was to blame for this insane idea and even more insane acting on it, it was whoever had written that article in the new architectural trade magazine she’d subscribed to. One look at the multi-page spread for the new hotel had opened some forbidden door in her psyche and made her infatuation over her two bosses kick into overdrive.

And she’d done so well in stomping the shit out of that infatuation over the two years she’d been working at D & K Associates. Hell, she’d put such a tight lid on the hots her bosses aroused in her, she should be on a list for sainthood somewhere.

Untucking her blouse, Kim let the soft silk glide down her arms and folded the garment over the back of the desk chair. She unzipped her knee length gabardine skirt and did the same. She sat on the edge of the bed and shook her head as she slid off her thigh high stockings and draped them on the bedside table.

The whole hots-for-the-bosses was so weird. Beyond weird. Her sister loved teasing about her inborn ultra-conservative streak, and she’d never even so much as looked at another guy on those rare occasions she’d steadily dated. To be attracted to two men at once was like something out of left field.

Worse yet, it wasn’t just an attraction to their good looks or intelligence. An all-out lust wave hit her if she spent more than five minutes in their combined presence.

That made weekly staff meetings ever so much fun.