Uno Due Tre Quattro: Wicked Tales of Singles to Foursomes

* Uno 1. The Soldier's Wife - a wife alone plays for the camera. 2. A Day to Myself - the accidental discovery of Gay Porn gives a married woman a whole new kink. * Due 3. A Friend in Need - when Lara's best friend asks for her help she discovers more than she bargained for. 4. The Private Tutor - a spoiled piano student learns a lesson for life when disciplined by his tutor. 5. Happy Birthday Baby - a nighttime encounter with a Cop on a deserted country road turns into the best birthday ever. * Tre 6. Dirty Train Girl - dirty fantasies come to life on the 5.45 p.m. Train from Linley Station. 7. Quid Pro Quo - a jealous wife doles out a little quid pro quo. * Quattro 8. Simon Says - a game of Simon Says pushes the sexual boundaries of two couples. 9. Revelations in the Dark - voyeuristic play ends in some serious sexual revelations for a Lila and Brent. 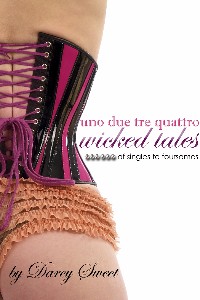 Uno Due Tre Quattro: Wicked Tales of Singles to Foursomes

"Uno, Due, Tre, Quattro was a good book with a lot of wonderful short reads… It was well worth my time and broke up any kind of monotony that some books tend to have. It gave you a taste of many different lifestyles, each one growing hotter than the next. If you are looking for a read that won’t disappoint then I would recommend this story to you."

She was angry. Loudly not talking to him in the way women did, slamming doors and stomping her sensible heels on the hardwood floor. So he’d flirted a little, it was what he did. She knew that when she married him ten years ago.

She looked fantastic. Not that he could tell her now—she’d think he was sucking up. Her dress was hooker red, slinky and wrapped around her tighter than anything she usually wore. The edge of anger that accompanied her outfit only made her hotter in his opinion.

“Do you do it deliberately?’

Aaah, she was finally speaking.

“Do you deliberately flirt in front of me?”

“Sweetheart I didn’t even talk to her. She talked to me.’

“Right. After you looked at her in that aren’t you a gorgeous piece of ass way.”

The gas station attendant was a gorgeous piece of ass, but she held nothing to his wife in full fury mode. Her pouty mouth curled in a snarl, eyes flashing, chest heaving. Man, he wanted to fuck her hard. It was their monthly date night, the kids had just been picked up by grandma for a sleepover and their dinner reservations weren’t for an hour. So maybe, just maybe…

“You can wipe that look off your face buddy. No way, no how are you getting a piece of this fine ass tonight.”

OK, so maybe not.

“Maybe if you were wearing a wedding ring...” The rest of the argument disappeared down the hall with her as she stormed away. Not that he needed to hear it, he could repeat it in his sleep having heard it so many times over the last ten years. It wasn’t as if he didn’t wear a ring so he could pick up. He might flirt but he never, never cheated. He couldn’t wear the ring, not safely, not with the tools he used on a daily basis. Sure, he could probably put it on when not at work but, Jesus; he was a man. He didn’t think about frickin’ jewelry. Truth be told he wasn’t even sure he knew where the ring was, maybe in his toolbox? No way was he telling her that, not if he wanted sex again this decade.

He was wondering whether date night was a complete goner when she finally reappeared from the bedroom. He turned off ESPN and put the remote back on the coffee table. He hadn’t really looked at her—too busy finding his keys and getting his jacket—so when he opened the door for her and got a good look he cursed, “Jesus Fucking Christ!”

She was still wearing the red number but it was now open all the way to her waist, a red and black lace up corset underneath. The corset cinched her waist and squeezed her breasts up into luscious mounds. Her hips seemed rounder, ripe and full. The unruly curly hair she normally pinned back into a neat bun was now big and loose and her lips were as shiny hooker red as the dress.

Those red lips pursed in a pout as she looked at him and loudly tapped her foot. He looked down at the tapping, the shoes had been changed too. No nice sensible black pumps, they were come fuck me heels, with black ribbons that laced up her beautiful calves.

She arched a brow and said, “Problem Jack?”

No, no problem at all, other than fact that if he didn’t adjust his rapidly stiffening cock right now his balls would be strangled.

He shook his head and watched her ass as she walked through the door. Now was the time to shut his mouth and pray she’d forget she was angry so he could please, please get a piece of that fine ass.

Oddly when he got to the car she was in the drivers seat. He normally drove, but in the spirit of not getting in further trouble he got in the passenger side and said absolutely nothing. When she took the wrong turn to the restaurant he still said nothing, thinking that she’d eventually work it out and maybe he’d score some points for not raggin’ on her about it.

She actually spun the tires when she pulled into the lot of The Hardball Bar. One of their old haunts, pre kids, pre marriage.

“Aah Cass, honey. We have reservations.”

Cassandra didn’t normally curse. Didn’t dress like that and didn’t curse. Something was definitely going on. She didn’t give him a chance to ask. She was out of the car and across the parking lot before he had his door closed.

The Hardball hadn’t changed much in the decade since they’d been regulars. Dim lit, bare concrete floor, caged stage with a hard rock band playing at ear splitting level. Cass stood out like a rose amongst the thorns in her slinky red dress. Most of the other women were in jeans, barely there skirts and cut off shorts. Cass didn’t speak to him, just made her way to the bar and ordered a Mexican beer—nothing for him. Hips swaying she strut over to a table and sat down on a stool propped her leg on the footrest of the table and flashed a gorgeous expanse of leg. She ignored him and drank straight from the bottle. Red lips pursed around the clear frosted glass. His dick jumped as her tongue poked in the end and licked at the wedge of lime stuck in the top. Lost in a fog of lust it wasn’t until she stroked a hand down the bottle that he realized.

She wasn’t wearing her wedding ring.

It was a gut punch. The emotion that hit him as his wife, hot as sin, sat there without his ring.

Whiskey colored eyes flashed at him with wicked fury, “Why Jack? Don’t you trust me?” She was quoting him back one of his own lines. “Do I need a mark for you to know that I’m yours?”

He slumped down in the seat next to her, touched her arm but she turned away. He’d never seen her so angry. “Honey, what do you want me to do?”

“Get me another drink.”

He didn’t argue. As he made his way through the slowly building crowd he decided he wouldn’t argue, not just because he wanted her but because he probably deserved whatever she wanted to dish out. He was a terrible flirt, for years she’d complained about it, begged him to stop, but he never had. She thought it was because of the other women, that he somehow needed more than her, but she was wrong. She was the reason. He’d never told her that when she wasn’t there, he didn’t flirt. It was her reaction he craved, not the attention of the other women. Her fury, her jealousy, he loved it; it turned him on like nothing else.

And now he was paying the price for his sins—for all the years of making her jealous.

He ordered two beers, deciding to drink the same as her in a pissweak show of solidarity. Returning to the table he found her flirting with a couple of guys. Frat boys from the nearest college—ten years younger than her but they didn’t care. They obviously knew a good thing when they saw it. One had his hand flat on the table, leaning into her, barely an inch from his wife’s mouth. He shouldered the boy away and placed the beer in front of his wife. She barely looked at him, keeping her eyes on the blond Frat boy.

“Thanks Jack,” she said and took a long sip of her drink. Jack watched the pull of the muscles in her throat as she swallowed. He said nothing, sat down beside her and waited. Waited for his wife to tell them they were wasting their time, to tell them she was married.

Instead she laughed, leaned into them, shook her mane of hair and stroked a finger along her collar bone drawing attention to her luscious cleavage. Flirted. It was championship flirting, she had them eating out of her hand.

It simmered in his gut—jealousy. Lay there like a pool of heat. Not alone though, there were layers. More, so much more. Lust. Anger. Longing. Need.

The blond one took his wife’s hand and led her out to the dance floor. Silent he watched, downing another beer. The other one followed. He was dark, his head shaven completely bare, shining under the flashing lights. She danced between them, sinuous movement. Lithe and supple she rolled her hips and held her arms above her head. Her mouth open, eyes closed, she looked like sex. The blonde one was at her front, grinding his pelvis into her, pushing her back into the tall dark student who had his hands on her hips.

In his head he could see her, naked between them. Taken by them both, thrusting into her as she cried out. It exploded in him. The need the desperate need to see it. To watch her.

She came back to the table alone. Leaned into him, her scent tainted by the smell of them—young male heat. “Like that Jack? A little quid pro quo flirting? Do you like that?”

He didn’t answer. Took the back of her head and brought it down to his mouth. Teeth, tongue, lips, he bit, licked sucked. Took. Took her mouth. Melting into him, she plastered her breasts to his chest. At some point he’d stood. Now he had her backed up against the table. His hands went to her hips pulled her up to sit spread legged on the bar table. Wedged between her succulent wet heat he ground his hard cock, “Yes. Yes. I like it. I fucking love it.”

“Tell me. Tell me.” She panted against his mouth.

He rested his forehead against hers, closed his eyes and let it out. Let out the need that he hadn’t even known was fermenting inside him, “I want to see them fuck you. I want to watch, watch them take you. Watch you. Watch you come with another man.”