Karissa enjoys men and what they can do to her body, but when it comes to commitment, she's totally hands off. The strong-willed owner of her own garage, she's used to not only having to hold her own with men, but to fight off those who try to make her into a homebody. It's never going to happen.

A bet with a girlfriend forces her to reexamine her priorities in the man department, along with her latest interest, Jack. Is it really them...or is it her? 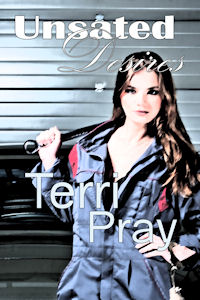 Damn it, she couldn’t even explain to her oldest friend what the real problem was. How would that make her look? As though she were some freak that could never be satisfied. What did they call men and women like her? Nymphomaniacs? No, that wasn’t quite right. She could go a good couple of weeks without sex, so she didn’t quite fit into that box. Sexual dysfunction?

Gods, what a label.

“And if you can’t even compromise on a date or three, how are you going to find the right man to settle down with?”

“Shit, if you didn’t need or want a man in your life in some way, then you wouldn’t even date. You’d stick to toys to satisfy that need.”

“Susan!” If only that was a real option. Lord, if Susan knew what a collection of toys Kari had back at home, she’d never live it down.

“Well, it’s true.” Susan shrugged, a smile playing over her full lip. “Sorry, but everyone here knows what you’re like. You’ll forget Morris within a week and be back on the dating circuit with the next hunk that comes along. Face it. You’ve settled into being a serial dater so well that you weren’t even aware that you had done it. I give it no more than a month before you’re on to the next man.”

Kari frowned. It couldn’t have happened that way, could it?

The relationship with Donald had been doomed from the start; anyone with a brain would have been able to see that. So, he had been a good man, and had been willing to put a few things on hold for her, expecting her to turn out for that race when she other plans had been just far too much. There were things she had needed to get done that day, work that just had…

All right, maybe it hadn’t been that important, but still expecting her to re-arrange her life just so she could go and see him race? Not that it would have mattered in the long term, but at least she would have been able to prove that she could compromise on occasions. However rare those occasions might be.

“Okay, suppose I have been going a little over the top in my reactions. What does it really matter? Any man who does love me will stay the course and change to suit my needs.” Kari met Susan’s gaze. “Not that I expect to find that type of man any time soon. They tend to have their own needs that always get in the way of mine. So it’s simple. I won’t ever end up with a man in my life other than a passing fancy.”

“Sure, they’ll change to suit your needs if they are the doormat type and want a woman to walk all over them. And to be frank, you’d be bored with a man like that after the first few months. You’re not the fem dom type no matter how you try to convince others that you want to be in control of everything. There’s a spark in you that’s just waiting for someone to come along who can match you push for push and won’t run away from you at the first hurdle. But you’ve also got to realize something. A relationship means there are times you have to back down, compromise and be willing to do things for others. I don’t mean all of the time, but at least 50-50, and that is where you have the problem. You don’t have the strength to back down.”

“Pardon? The strength? I have plenty of that. When was the last time you saw me let another walk all over me?” Her jaw set. “I’m not a weakling.”

“Strength is a lot more than not letting someone walk over you, Kari. Someone forgot to teach you that. Someone who compromises, who is willing to occasionally back down to another is not weak. They are proving they are willing to work at a relationship, that’s something you’ve never been able to do and I’m not sure you’ve got the ability to learn that skill.”

“Bullshit, I can learn anything I want to.” After all, she’d learned to run the damn body shop without anyone else being willing to teach her.

“All right, then prove it.” Susan smiled, a light dancing within her normally soft blue eyes. “If you’re so determined to be right, then prove it. The next man you date, I want you to see you back down on occasions, publicly back down as well as privately. I’m not saying on everything, but on things that will let you enjoy a date. Nothing that threatens the business, that part I’ll give you an out on.”

How would she always know the difference? “Okay, and how do we judge this?”

“By you being honest with me. The only two people who will know about the challenge will be the pair of us.”

“So you get to know all the intimate details of my relationship?” Kari arched one delicate eyebrow.

“Not as though I don’t know all of those to begin with, is it?” True enough. If there was one person that she relied on through the trials of dating, it was Susan. Though even then Susan was still kept at arm’s length on one minor detail, the real reason why each and every relationship eventually fell apart. Kari met Susan’s gaze, mulling over the situation carefully. “Fair point. And if I manage to prove you wrong?”

“Sure, if we’re going to do this, we might as well go whole hog. It won’t be the first time we’ve had a bet over something silly.”

“Silly, is it?” Susan pushed up from her chair and slid her fingers back through her hair, straightening it up. “All right. If you lose, then you wear a dress for a week in the office. Not just any dress, that slinky black number you tend to keep for first dates.”

A dress? In a place where she might end up with it covered in oil and grease? It could have been worse. Besides, she was going to win, so the dress wouldn’t be at risk. “Okay, and if I win?”

“I’ll buy you dinner at the restaurant of your choice, no holds barred on the bill. Including whatever you want to drink. I’ll even pay for a taxi home for you.”

“Done.” And she knew just the place they could go.

“All we need to do is wait until the right man walks in, and we can see just how long it takes you to back down.”