As the only son to King Kendrick, Owen despises the idea of being king one day. Magician may be the only career he’d like less. He has dreaded the days leading up to his fifteenth birthday, when his father will certainly declare Owen heir to the throne. But at the birthday celebration, his father falls ill. The only person in the kingdom that may be able to save him is a magician–the very same magician Owen holds responsible for the death of his mother.

Owen and his companions will have to travel the continent of Wittatun in search of the cure for King Kendrick. On the journey, they will battle strange beasts and harsh climates, befriend extraordinary magicians, and meet a dragon before returning to Innes Castle–where much has happened in the days since they departed. 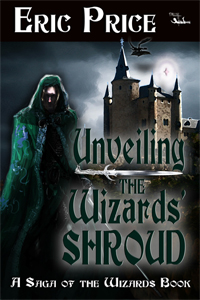 UNVEILING THE WIZARD'S SHROUD by Eric Price is a young adult tale about a powerful journey through discovery of truths a young prince must learn to move on into his place in salvaging his kingdom.

This is a story rich with magic, misconceptions, opening to the power trickling within, and ultimately giving up on long held ideals so you can grow into a force evil cannot deflect.

A FIVE STAR STORY, I, as a former teacher, can eagerly recommend to the young of all ages.

The late afternoon sun glared in the young warrior's eyes. Squinting, he could only see his opponent’s outline. His ever tightening leg muscles cried for a reprieve with each step, yet he continued to circle, waiting for the perfect opportunity to strike. After a long day of sword dueling with little downtime between rounds, Owen's whole body screamed for a rest. But he wanted nothing more in the world, at this precise moment, than to win the championship bout.

His opponent must also be tired. They had each fought four previous matches, and every contestant entered in the tournament presented a worthy challenge. Edward, Shield of the King—the commander of the King's Sentry, the strongest army in all of Wittatun—received continual praise for his skill with a blade. Owen, having already defeated two Sentrymen earlier in the day, hoped to beat one more. But to overcome the King’s Shield would require more skill than besting a Sentryman of lesser rank.

The fighters continued to circle one another. Sunlight gleamed off Edward's brilliant metal chest plate and helm. Now facing the westering sun, the Shield of the King squinted. The younger fighter saw his opportunity and sprung. He feigned a slash toward the commander's shield hand. When Edward raised his shield and braced for impact, Owen redoubled his assault.

He spun and sliced his blade at his opponent's neck. The loud clang of steel on steel resonated throughout the courtyard as Edward raised his sword to parry. The vibration transmitted up Owen’s arm, but he finished his compound attack by kicking the Sentryman in the chest plate. The judge blew a whistle to signify the landing of the first blow in the best-of-three veney.

The experienced warrior wasted no time mounting his counterattack by gaining the measure and reestablishing just distance. He made several quick jabs at Owen's head and chest, which the defender parried away with ease and countered with a testing jab. Edward sidestepped, moved back in line, and raised his sword to the en garde position. The younger fighter noticed Edward’s shield drop ever so slightly. The tiny gap in defense may provide the opening needed to finish him.

Owen lunged. He recognized the move as a mistake, but his forward motion could not be stopped. The tip of Edward’s sword slid between the hinge where the chest plate met the shoulder guard and dug into muscle. Sharp pain shot through his left shoulder, and he barely heard the judge blow the whistle through the anguish. Edward had lowered his shield as an invitation for a strike. When the younger fighter took the offering, the elder's stop-thrust found the only weak point of the armor.

Owen, large for his age, still stood six inches shorter than the Shield, whose muscular forearms resembled Owen’s thighs. The chainmail armor on his forearm, form fitting on most soldiers, clung tight to Edward. His muscles rippled as he pushed the sword tip a little deeper into the meat. A stream of blood trickled down the blade and dripped to the ground.