Halloween is a time for tricks and treats, but Kellan has received far more tricks this month than treats. Someone seems to want to make his life as horrible as possible, whether they’re breaking into his car, trying to interfere with his appointments, or leaving ominous notes for his boyfriend Matt. What starts off as a nuisance quickly becomes a nightmare.

The obvious culprit would be Matt’s ex-girlfriend Chelsie, who has a history of emotional manipulation and drama-seeking. The one problem is that most of Kellan’s misfortune happens while she’s out of town. Either she’s pulling a elaborate psychotic prank, or Kellan has somehow picked up a stalker, and a dangerous one at that.

there’s no telling what his assailant will do next. Can he keep his life together as this mysterious person does their best to tear it apart? 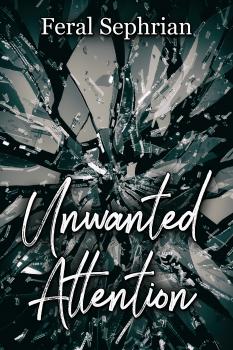 It was another night of tossing and turning as new fears gripped Kellan like thorny vines. Was this the work of a stalker? If so, who was it? What could Kellan have possibly done to attract that kind of unwanted attention? He played online multiplayer games sometimes, and he wasn’t the most pro gamer out there, but he wasn’t bad enough that someone would actively hunt him down. He didn’t even engage people in chat except to compliment them on a job well done or alert his team to something important. Other than that, his coworkers liked him, his neighbors liked him, his two previous relationships had ended amicably, and he didn’t exactly flaunt his sexuality or hand out his personal information to random strangers. He wasn’t even that active on social media.

Kellan’s sleep was so restless that he woke up around four-thirty in the morning, even though he hadn’t really fallen asleep until one at the earliest. Rather than go right back to trying to sleep, Kellan waited until Matt was supposed to be at the bakery, then called him.

The phone rang. And it rang. And it went to voicemail. Kellan didn’t know if Matt was still driving or just busy or if something had happened to him. He resisted the urge to hang up and keep calling until Matt answered, and instead he waited for the beep.

Kellan was interrupted by the sudden ringing of his phone against his ear. He jumped. He half expected to see “unlisted” under the caller ID. It was Matt. Kellan fumbled for the green button to answer.

“Kellan! What’s going on? Are you okay?”

Kellan told him about the bad review and his latest, most terrifying theory. “I didn’t tell you about it last night because I was hoping I could come up with a better explanation, but I really can’t.” Kellan wiped away a stray tear. “Matt, I think I am being haunted, except it’s not a ghost. There’s someone out there who ... I don’t even know what they’re trying to do. I just know that it’s scaring me.”

There was an odd staticky noise on the other end that was either shuffling papers or Matt sniffling. “Oh, honey bunch. I really wish I could be there with you right now. There is still a chance that it’s one of Chelsie’s friends, but this has moved on from stupid pranks to full-on harassment. Do you think you should call the police?”

“Maybe. No. I don’t know.” Kellan sighed in frustration. “I don’t have any real proof that it’s all the same person. What am I going to tell them? That I highly doubt there are that many people who would refer to me as ‘filthy’ so therefore it has to be the same person?”

Matt paused. “You know, at this point I’m hoping it is Chelsie who is responsible for all this. I asked if I could talk to her today and she said she was busy, but we were going to get coffee or something tomorrow. I told her I wanted to talk about how her trip was. I am definitely going to skip the small talk and cut right to asking her if she put anyone up to this. If she is, she’s definitely going to deny it, but -- oh, hang on.” Matt’s voice became quiet and muffled as he spoke to someone else at the bakery. “It’s Kellan. Yes, I know, it’s -- Okay I’ll be right there.”

Matt came back to the phone. “What?”

“I said I think I’m going to try to get more sleep. You go help them out if they need you.”

Kellan smiled. “I need you even when I’m fine. I’ll be okay for now, sugar pie. The only way they could get to me before I leave for work is if they break into my house, but then I would have a reason to call the police.”

“Well, okay. I guess I just have one more question.”

“Did the reviewer really accuse you of jizzing in the food?”

That got Kellan to laugh, though in his exhausted and stressed state it came out as a sort of hiccupping wheeze. “Straight people and their weird delusions, amiright?”

“More like secret fetishes. And as someone who has tasted that secret sauce I don’t think it would be a bad addition to some dishes.”

Kellan laughed again, heartier this time. “Okay, okay, get to work before you get in trouble. I love you.”