Bestselling author Kale McKinnon is a modern Scrooge – eccentric, misanthropic and reclusive, made bitter by the coldness of his wealthy family. But when optimistic Canadian graduate student Molly Gillis visits Oxford and invades his space, he realizes Christmas is about to change for him forever. But can he make her stay, and force himself to un-Scrooge enough to be the right man for her? 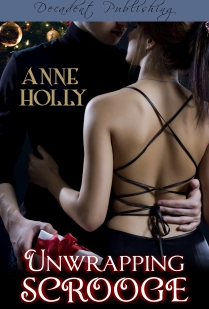 Despite his efficacy at staying out of her way the whole first month she lived at the house, Kale now had no luck whatsoever. At the local shops, in the yard, in the front hall—she seemed to be everywhere now, which was not in keeping with his plans.

Once, the pair even literally ran into each other at the mailboxes, when Molly came barging into the small space just as Kale turned to stride out. Neither had noticed each other until their torsos had collided. Instinctively, he brought his glove-clad hands up to her fleece-covered arms to support her. He detected a slight tinge of cinnamon on her breath as she puffed in surprise, and all thoughts fled from his brain as he stared into wide, hazel eyes, fringed with impossibly dark lashes.

He couldn't remember the last time his mind was completely blank while working on a book, but at that moment he would have been hard pressed to recall his own name.

“Steady on,” he murmured, when he realized he should say something.

“Hi,” she breathed, simply and shyly.

“Hi, again,” he said, softly, taking unfamiliar pleasure in her pretty blush, but finally forced himself past her her to the door.

She stood aside and watched as he exited the building. Her flatmate, Colby, in their infrequent discussions of the other inmates of the building, had dismissed Kale McKinnon as weird and old. However, right then, Molly saw him as nothing like that. True, he had some eccentric qualities, yet to her, his oddities were more intriguing than anything else. And no one who felt so firm and vital could be considered old. Around him, her heart rapped out a tattoo that told her she was in the presence of vibrant maleness—a feeling to which she was not normally prone.

To Molly, he was sexy, if in an unconventional way. If she were more like Colby, she would say he had a great butt. She smiled impishly at the observation. But, no, she was just herself, and she didn't notice those kinds of things about men she barely knew.