When the streets are full of bloodsuckers, werewolves, zombies and ghouls, where will you turn? The cops don’t know how to stop them, the Army’s pretty much given up and even the Marines are stumped when their bullets and grenades fail to stop the onslaught. Have no fear, Ushers, Inc. is here! Four high school movie ushers, who collectively have seen over 42,000 hours of B- and C-horror movies know just what to do. Did you know copper pennies can stop a zombie in its tracks? Abby Cooper, Head Usher, does. Did you know garlic paste is twice as effective on vampires as garlic cloves? Abby Cooper does. Did you know werewolves are absolutely petrified of seeing a Hershey’s kiss? Abby Cooper does. The girls at Cypress Cove High school—especially Rich Witch Mia Hopwood—call Abby an uber-geek; the victims she rescues from zombies, werewolves and vampires just call her one thing: Hero! But Abby and her fearless crew of movie ushers-slash-superheroes face more than just bloodsuckers and brain-biters. There’s Wyatt Winters, for one; he’s the hot new PR guru Ushers, Inc. has had to hire to handle all their press – and with his smoldering good looks and air of confidence, he’s causing more than just tension between Abby and her old boy-crush—and fellow usher—Zach Nash. And let’s not forget the monsters, who aren’t too happy about four geeky ushers beating their butts all over creation. Now the League of Associated Undead (LAD) is converging on Cypress Cove, determined to stop Ushers, Inc. once and for all. When it’s the monsters versus the monster hunters, who you gonna call? Ushers, Inc., that’s who! 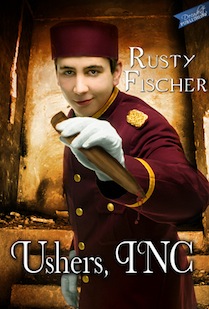 He’s in jeans and a leather jacket, which is a little odd because most werewolves know that whatever they’re wearing when they morph won’t be in such great shape once they turn back into a human, so they tend to wear baggy or cheap things—four dollar sweatpants and cheap T-shirts they get five to a pack and won’t worry about leaving behind, in bloody tatters, as they run away from their latest victim.

His hair is longish, his eyes alive and alert, his scowl feral and onerous.

He starts right off with the attitude, hissing, “Out of my way, loser. I’m trying to watch the movie.”

I stand politely just out of swiping range and whisper, “Yes, sir, so are the other patrons and well, frankly we’ve had…complaints.”

“From whom,” I correct, because there’s nothing a werewolf hates more than being corrected, let me tell you. Well, aside from getting capped by a silver bullet, of course. “And that’s confidential, but if you don’t take the growling, hissing, and fang licking down a notch, I’m going to have to ask you to leave.”

He smirks, because he knows he has me.

After all, according to the Living with the Living Dead Laws, you can’t just toss suspected werewolves, vampires, mummies, or even zombies out on their ears just because you suspect they’re one of the undead.

That is, unless you’re one of them yourself.

And Abby and her fearful band of movie-loving, penny-throwing, garlic-paste-toting ushers are all that stands between Cypress Cove and utter Monster Armageddon.