The sudden appearance of superpowers might transform most mild-mannered men into egomaniacs with visions of grandeur. Fortunately, Vic Braunson isn’t most men. His powers come from his lover, Matt diLorenzo, and Vic refuses to let the abilities control or change him.

But even he can't stop the powers from enhancing who he is. These five stories explore different aspects of Vic's personality that are brought out by his superpowers. Contains the stories:

The V in Valor: When one of the landlady’s cats gets loose, Matt broaches the subject of getting a pet with his lover. Vic doesn’t want the added responsibility, but the discussion raises questions of long-term commitment that neither man is ready to address just yet.

The V in Vengeance: Vic and Matt slowly adjust to life with a new addition to their little family. Matt finds himself dwelling on a more outward way to show the world how he feels for Vic. Though living with a superhero isn't always easy, Matt wouldn't have it any other way. Especially when his car is vandalized late one night.

The V in Vigilant: When Vic has a rough day at work, his lover Matt puts their telepathic connection to good use, tapping directly into Vic's needs to provide some relaxing downtime at home. However their sensual massage turns to serious talk, and Matt finally asks Vic the question he's been wrestling with for the past few months.

The V in Virtue: From the beginning, Vic and Matt have celebrated their anniversary on New Year’s Eve. It’s tradition for them to swear off sex the week between Christmas and New Year’s, a long stretch Matt finds especially difficult to weather. Then Roxie invites the guys to a year-end bash at her place. Will Vic still make the evening special even though they aren’t alone?

The V in Vulnerable: Matt is on a quest to find the perfect ring to symbolize the love he shares with Vic. An ad for a local jewelry store draws him in, but criminals strike before he leaves. When the police arrive, what started as a simple robbery turns into a hostage situation. Officer Jones calls the one man who she knows can help ... Vic.

The V in Valentine's: For Valentine’s Day, Matt has the perfect evening planned. But the police need Vic’s help to find an autistic boy who wandered away from his campsite. If he can’t be found before the weekend, chances are he won’t survive. The timing couldn’t be worse -- Vic’s arsenal of superpowers are nowhere in sight. Despite all the odds, can he save the boy as well as the romantic evening with Matty? 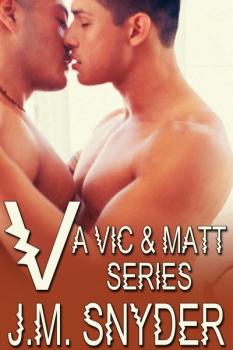 EXCERPT FROM "V: The V in Valor"

After breakfast, Matt cleared away the plates while Vic fought a silent battle of wills with the cat, who stretched out across the open newspaper, making it impossible to turn the page. Vic tried anyway, covering the cat with the sheet of newsprint, but he hadn't begun to read the story on the other side when the cat began chewing at the paper. "Get off my table," Vic admonished, slapping the table near the cat's tail.

The cat stared at him, unperturbed, then resumed washing itself.

Matt laughed as he sidled up to Vic's chair. "Is the big, bad kitty cat bothering you?" he teased, easing an arm around Vic's shoulders in a half-hug.

"The big, bad kitty cat's going to find his furry ass dumped on the floor in a minute," Vic growled.

The cat ignored his threat and sat up a little to begin licking its belly. One graceful hind leg rose in the air, and the faint slurping sounds the cat made as it cleaned itself sounded gross. But when Vic made a move to pick up the cat, its muffled purr turned to a low growl that ended in a hiss seconds before Vic pulled his hands back.

With a look of resignation at his lover, Vic asked Matt, "See what you started?"

"Leave it alone," Matt said, tugging on Vic's robe. "We were heading back to bed, weren't we? Unless you have something else in mind. The shower, perhaps? Or hey, how about here?"

His hand rubbed down the front of Vic's chest to fist around the knotted tie that held his robe together. Deft fingers worked the fabric free, then delved beneath the flannel panels to tickle over Vic's muscled belly. Vic sat back in the chair as Matt's hand danced across his stomach and chest, tweaking one nipple when his finger caught on the hoop pierced through it. Leaning against his lover, Vic wrapped an arm around Matt's denim-clad thigh and his hand angled between Matt's legs pressed up against the seat of his ass. As Matt bent down to claim a kiss, Vic murmured, "You know it's watching us."

Matt snickered. "It's a cat. What, do you think it's going to tell Mrs. K everything it sees once she gets back?"

Vic didn't answer and Matt leaned into their kiss, pinning Vic back to the chair. His hand dipped down over the slight paunch at Vic's abdomen and below his smooth pubic mound to grasp at the semi-erect length between his legs. Vic's meaty cock jumped into Matt's hand, and his lover moaned into their kiss as Matt massaged his firm length. ::Here's fine,:: Vic admitted, sinking down in his seat and spreading his legs to allow Matt access to his most intimate spot.

But when Matt cupped his balls, Vic froze. Matt's mouth brushed against the side of his lover's face as Vic turned away. "What?"

With a bark of laughter, Matt stood and leaned back against the kitchen table, his hand still lost in the folds of Vic's robe. "Way to spoil the mood, Romeo. She's not exactly on my mind when we're getting it on. Is this about the cat? Because we can still go to the bedroom if you want."

Vic shook his head. Extracting Matt's hand from between his legs, he raised it to his lips and kissed his lover's knuckles. "No, I mean she's headed back. I just picked up on her thoughts as she turned onto the street."

Matt sighed. "Which means now I have to wait."