The prairie and sand hill country of north central Nebraska is a land of stark beauty and few people. Jack and Carrie Decker and their two children find themselves stuck by circumstances and a lack of money in this land far away from anywhere they were going or had been. Jack had once been a senior corporate executive and a business owner before bad decisions and bad breaks left him with nearly nothing. After their car breaks down in the middle of nowhere, he and his family are stranded in unfamiliar surroundings. The family is welcomed into the small community, where Jack and Carrie find jobs, friends, and some peace of mind after years of stress and worry. However, the bucolic peace doesn’t last. Bullets start flying, and a bomb almost kills them as they find themselves at the center of a battle involving books at the school library and on a collision course with a vicious gang of robbers. Jack and Carrie, with the help of a mysterious old man and his cat, summon courage and conviction they didn’t know they had, and dig until they find the clues that lead them to the man at the center of it all. 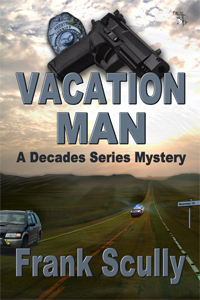 Carrie watched through the bedroom window as Jack drove off. There was no point in going back to bed. She wouldn’t be able to rest. She dressed, went downstairs, and paced the floors.

Time went by, one long second after another, bringing ever-worsening nightmares to life in her mind. After only fifteen agonizingly long minutes, she could stand it no longer. Throwing on her coat, she headed out after him.

As soon as she got onto the road, she regretted it. Even in the pickup, which she had taken in hopes that it would do better in the snow, it was difficult staying on the road for even the short ride to town.

Once in the shelter of the town, it was better. She thought of turning around, but it was only a short distance up Water Street to the school, so she drove on.

Jack’s police car was parked by the side of the road, drifts already forming around the tires. There were lights on inside the school, easing her mind. Lights meant everything was all right. Jack was right. It was just a false alarm.

She waited in the pickup, expecting him to come out at any time. It shouldn’t take too long for him to finish up. The wind howled in the subzero weather. The wind chill was down to forty-five degrees below zero according to the radio newsman. Carrie believed him.

Jack was going to be angry with her for coming after him. Not too much, but certainly a little bit. It didn’t matter. She had to know. Had somebody been after her library?

Even with the motor on and the heater turned up all the way, it was still uncomfortable in the old drafty truck. She told herself that was why she was going into the school, not because she’s worried about what was keeping Jack so long.

She grabbed the flashlight out of the glove box and headed up the sidewalk to the front door. The wind blasted her in the face, so she kept her head down, tucked into her collar, and followed the beam of light to the door.

As she got closer, she looked up and saw Jack through the glass door. He was walking toward the door carrying two large pails.

What are those, and why is he carrying them around?

As she watched, she saw something so absurd she couldn’t believe it at first. A huge man dressed in black with something on his face came hurtling after Jack. Before she could even scream into the wind, the man attacked Jack with something, lifting him off his feet and throwing him over the man’s back and onto the floor.

Carrie was so stunned she was momentarily paralyzed. Then, like a tigress, she leapt to the door and pulled it open, racing the few feet to the man on Jack’s back, and swung the flashlight with all her might, hitting him on the head.

She saw the man let go and rock off Jack’s back. Getting ready to swing again and deliver another blow, she felt a sudden tremendous pain as something hit her and saw the floor rush up to meet her head just before darkness enveloped her.