It’s Valentine’s Day, and Marianne wants to spice up her marriage. After twenty years, even though she and her husband are still young, things have gotten a little stale. She decides to check out Dreams Come True, a sexy little shop specializing in lingerie and toys of the adult variety.

When she touches the silky nightie, her visceral reaction to it is immediate and undeniable, and when the gypsy woman running the store says she’s found the daily special and it’s free, Marianne’s sure she’s won the jackpot. In the middle of the night, she finds out she definitely has. 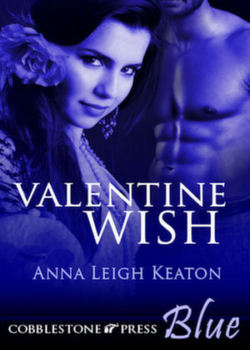 Marianne Corruthers sat in her twenty-year-old subcompact clunker in the parking lot of the Midtown Mall, staring at the flourished red and black printing on the window of the store she’d been trying to work up the nerve to enter for the last twenty minutes.

Dreams Come True, the window read. Red and pink sparkling hearts decorated the window display behind a mannequin dressed in a tasteful, yet barely there, black silk nightie with red lace trim. A red feather boa accented the outfit, as did black fishnet stockings held on by lacy red garters. Shoes—the kind her husband called fuck-me heels—in black with a good two-inch lift and six-inch heel, sat on the floor of the display as if kicked off in a perfectly sexy pile.

The window dressers here knew how to do it with style, Marianne thought. She’d been coming by here for nearly a month, a couple of days a week after work, trying to work up the nerve to go inside and see what was in there. What was behind the sexy, yet always tasteful, window display.

They sold other things besides lingerie. The small printing under the name of the store stated they had: Adult Novelties and More…

That was all she wanted. Something more. And today being Valentine’s Day would be the perfect time to do…more. Get more. Experience more.

What would Frank say if she walked into the bedroom in those fuck-me shoes and that silky, lacy black and red thing? What would he do? Would he drool? Be speechless? Attack her, throw her on the bed and ravish her?

Marianne shivered, and her pussy clenched at the thought. To be ravished…

Her sexual frustration was darn near maximum capacity. Her fingers weren’t doing the trick any longer. She really just wanted her husband to look at her with lust in his eyes again.

Then again, after twenty years, maybe it had all been used up.

She’d been a child bride. Just barely legal, less than a month out of high school, when she married Frank. He’d been older—by a whole three years—working at his dad’s garage. He had cash to blow back then and treated her like a queen. Fucked her like she was a whore. God, she missed those days. The days when he’d walk in the door of their tiny apartment after work smelling of oil, monkey grease, and that green, abrasive hand cleanser, shove her against the wall and bury his tongue in her mouth. Times when they were so hot for each other they never made it out of the entryway and fucked like rabbits on the floor, on the sofa, on the kitchen table, anyplace with a flat surface, and sometimes not even that. The backseat of the car, against the wall, behind the bowling alley when they couldn’t even make it to the car they were so hot for each other.

Twenty years later, they had a mortgage, a daughter in college they tried to help out, and Frank now ran his dad’s garage since his father’s heart attack a few years back. Marianne worked as a waitress part time, her tips paying for the groceries, and her meager wages going into retirement funds for the two of them.

They were both tired. Worn out before either of them reached forty. Frank was only forty but acted seventy most days. Came home from work after seven after the garage closed, sat in front of the television and ate whatever dinner she’d prepared for them, then took a shower and was asleep by nine. He was out of the house by seven in the morning. Six days a week. On the seventh, he rested, watched whatever sport was on TV, or went fishing with his dad, or hunting with his brother, or…almost anything not involving her because she worked most Sundays at the diner.

One of them had to do something to spice up their marriage or, she feared, they’d become like her parents. Resentful, hateful almost, residing in the same house but living completely separate lives.

Marianne wasn’t in bad shape. She cooked healthy food for them, got a lot of exercise waiting tables, tried not to indulge in sweets—though that was tough when chocolate was not a bad substitute for love.

She shook her head. Frank still loved her. He always gave her a kiss when he came home from work. It might be on the forehead now rather than a tongue-dueling kiss, but he showed affection. Somewhat. A little peck, a quick hug before he left in the morning for work, a tender word now and then.

She just didn’t really feel…loved. Sex. She wanted sex! And she wanted lots and lots of it. Hot, hard, dirty, nasty, up-against-the-wall, teeth-crashing, boob-smashing, pelvic-grinding sex. She wanted to lie panting in his arms, their bodies stuck together with sweat, her panties ripped, teeth marks in her skin, fingernail marks in his.

Ohh, it had been so long!

Girding her nerve, she shoved open the car door into the blustery February wind and headed into Dreams Come True, hoping that hers would tonight. It wasn’t as if she was asking to win the lottery; she just wanted a mind-numbing fuck from her husband.