Valor of a Woman

Kimra Valor was a woman on a mission. To enjoy her final vacation and set in motion the events that would end her life. The brain tumor was inoperable. Her entire life had been mapped and planned out for her, now it would end on her terms.

She just wanted a week of relaxation to get her mind set for the end. What she hadn’t planned was meeting Jaren Davies and his enormous but adorable English Mastiff, Mac. In them she discovered what she’d craved her whole life, compassion, gentleness, and love.

The last thing Jaren Davies expected while on vacation was to fall in love. In Kimra’s care-free laughter and absolute passion for everything he found what he never believed existed. One week and he was done, she truly was the woman of his dreams.

Not wanting to ruin the magic they shared, Kimra kept her illness a secret. Was it wrong to want to spend as much time surrounded by love and happiness as possible?

Could she walk away and break Jaren’s heart?

Would he allow her to leave?

This heartbreaking story follows choices that are the most difficult to make, ones no one should have to make. 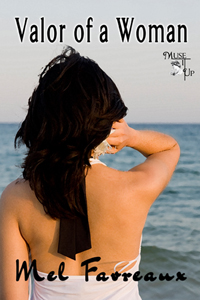 Valor of a Woman

She rolled over in bed, feeling his arm draped over her waist, and smiled. The blue tint at the windows hinted sunrise was on its way.

A snuffling sound at the edge of the bed startled her. Mac was there, staring.

"You need something, boy?"

His heavy tail thudded against the floor in a few quick thumps.

She eased out from under Jaren's arm and reached for one of his big T-shirts he'd loaned her to lounge around in. Mac jumped up. She padded barefoot down the stairs behind him. He led her straight to the backdoor and stood there patiently, waiting for her to open it.

It was cool, and the mist of the sea hung heavy in the air. Wrapping her arms around herself, she looked down the beach. It was low tide. A few early birds were picking around at the tide pools. The soft whoosh of the ocean lulled and comforted her.

A wave of dizziness struck, and her legs felt heavy. She fell into the railing and banged her arm. Hissing from the pain, she lowered herself to the porch and pulled her knees up; fighting the stinging tears.

"Just a few more days…please," she whispered into the wind. "That's all I ask for."

Mac's heavy paws thudded up the stairs. He ambled over and nuzzled her cheek.

Sighing, she reached up and put her arms around his thick neck. "I'm sorry Mac, can we keep this between us?"

The canine's large chocolate brown eyes found hers. She saw real emotion in them. Dogs were far more perceptive than humans were. He'd probably been able to smell the illness on her from the moment they met.

He whined softly and licked his lips.

"Am I being too selfish for wanting to spend my last days of strength with you and Jaren?" Wiping away a tear, she buried her face in the scruff of Mac's neck. "Is it too selfish to want to be happy for now?"

Mac stood there like a true champion while she held onto him and gave into grief for a moment. This would be their secret.

Blotting the tears, she used Mac and the railing as leverage to gain her footing. The dizzy spell and weakness was over, for now. Hopefully today would be another good day.

She patted Mac's head, opened the door, and slowly made her way back up to bed, curling against Jaren.

Stretching, Jaren rolled onto his side, facing Kimra. Smiling, he stroked a few errant strands of hair from her face. His hand continued to gently move from her cheek, to her shoulder, and down her arm.

He frowned seeing the bruise on her forearm that most certainly wasn't there last night. Having explored every inch of this body with his hands, lips, and tongue; Jaren would have remembered a mark like this. He gently traced the edges of it.

"I took Mac out just before daybreak, and I…guess I must have dosed off standing on the porch. I fell into the railing."

"You should have waked me, Mac is my responsibility." He propped on his elbow and looked down at her. "Are you all right?"

Her gentle smile soothed him. Raising her hand, she stroked his cheek. "I'm fine, Jaren. I just stumbled."

Nodding, she curled her body against his and sighed sleepily.

With a grin, he ran his fingers through Kimra's hair and placed a gentle kiss on her temple. If she only knew the warmth that blossomed in his chest and how she made him feel with each passing moment they spent together. Jaren's lips traveled down her cheek and neck.

"You're a little prickly." Kimra rubbed his whiskered face.

He saw the telltale red trail along her cheek and neck and frowned. "Sorry, baby."

"It's actually quite a turn on," she whispered and traced the edge of his lips with her finger.

"Hmm…really?" Jaren nuzzled her neck again, listening to the soft moan she released while adding his tongue to the mix.

It didn't take but a few minutes of playful teasing to get them both ready for the first round of the day.