She dances by the light of the full moon, a goddess with blonde hair who swiftly shifts into a magnificent silver wolf. A year ago, Charlie Aquino and his partner had nothing more on their minds than the gangs they dealt with. Now Jesse is married to a shifter and Charlie is so obsessed with one he drives by her house every night just to get a glimpse of Liane Cosa. He’s met her in human from but never dared approach her in her wolf from, afraid she’ll bolt. But then, one memorable night, he screws up his courage and beneath a full moon offers her his heart. Can she accept it? 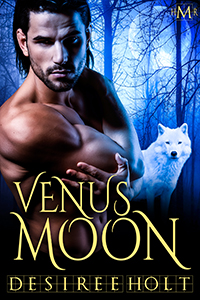 Then he saw her, right at the edge of her yard, a magnificent silver wolf gleaming in the bright, full moonlight. Alone.

She’d never let him get close to her when she was in her wolf form, no matter how many times he’d hinted at it. If she spotted his car cruising by, she raced into the trees behind the cottages. No matter how long he waited, she wouldn’t emerge. Yet here she was tonight, knowing full well he was sitting there hoping to catch a glimpse of her. And she hadn’t moved. Hadn’t cut and run.

Very quietly, he opened the car door, closing it behind him and walking toward her with slow, careful steps.

Please don’t run. Please, please, stay where you are.

As if she heard his silent prayer, she remained motionless, watching him. As he drew closer, he could see the moon reflected in her warm amber eyes and would have sworn she was smiling at him.

He stopped about two feet away, not sure what to do next. Forcing himself to stay completely still, he breathed slowly even as his heartbeat ratcheted up. The next move was up to her.

Finally, when the tension was thick enough to cut, she ambled toward him, stopping directly in front of him and nudging his hand with her head. He slid his fingers through the magnificent silver coat that felt as soft as the finest silk. Electric thrills speared the length of his arm and shot through his body.

She nudged at him again then lowered her head and pressed her nose to his crotch. Her long, pink tongue snaked out and licked the length of his fly. Sweat broke out on his body as his cock leaped to life in response. 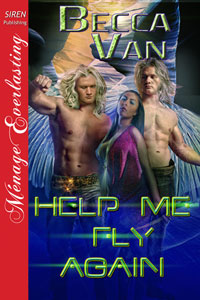