Eleven summers after Jan-nell the bowdancer left her daughter Mira-nell with the sisterhood of hunters on the mountain and came to live with Khrin to raise their son, Bearin, she is called by the sisterhood to find their origins.

The first clue is a bit of song Jan-nell learns at the deathbed of the oldest woman in the sisterhood’s village. Jan-nell and her companions seek the origins of the mysterious women on the mountain through the verses of the song.

Master hunter Bekar and master trackfinder Chandro accompany Jan-nell and Bearin on a quest for the lost song that takes them from their local inn out across the landscape of their world as they meet bee spinners and kings and risk their lives to achieve their goal.. 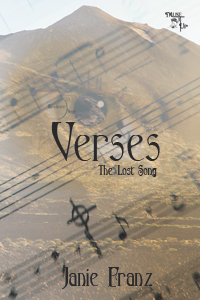 “Is the old woman failing?”

“She is ill, and Leyton worries that she may pass before she can tell Jan-nell the gossip from the first mothers about our coming to the mountain.”

“She wants a story-song then?”

Bekar bit into a crisp cucumber, relishing the new taste. “Hmm.” Then she turned to Jan-nell. “I would like to know how we came here and why. I feel there is something we should all know, but it has been kept from us. We did not have feasts and music before you and Mira-nell came, or ways to mark our life passages, except for when we have our first moon and become women or when a few take their places among the hunters.”

“At least Mira-nell has that affirmation. She would not get it here.” Jan-nell cast Khrin a look. “They would be plotting who she should wed by now—if not preparing the ceremony as we speak.”

Khrin held up his hands. “It is not my doing. My mother likes weddings and babes.”

Chandro’s eyes rested on Bearin. “Do they plot who you will wed?” she asked the boy.

“What?” Jan-nell turned to him.

“I do not bother you with their talk. Granddame’s sister has a girl my age that she thinks is fair.”

He shrugged his shoulders. “They do not count kin that far from Granddame. Besides, though she is fair, she cannot think. What would I have to say to such a one?”

“There will be a time where thinking is not what is most in your mind when you look upon a girl,” Chandro counseled.

Frowning at the trackfinder, Jan-nell continued. “You have seen her?”

The boy gave a nod.

Khrin shook his head, grinning “I do not know if your mother is more shocked that she did not know about this or that she does not know what instructions you have been given about girls.”

“Well, it is obvious somebody has been filling his head with something!” Jan-nell snapped. “I do not wish him to have a houseful of babes before he has explored the world and found what lies in his heart.”

Bekar chuckled, and Jan-nell turned her growing anger on the hunter, glaring fiercely at her.

“Forgive,” Bekar said. “Be at peace.” She turned to the boy. “Tell us what you have learned about girls.”

Bearin looked up at his teacher. “It depends on the girl. Some are silly though they may be beautiful. Some are wise though they may look like a goat. Some are noble and kind, and some are devious and can never be happy no matter how much is given to them. Some have talents, though they may be in the domestic arts, while some are clever and strong and know men’s work. Both kinds can work alongside any man. Girls—women are as diverse as men.”

“And what of pairings—wedded or not?”

He shrugged again. “Just as varied.” He looked at every face. “As are families. Are we not a family around this table?”

“Yes, we are,” Khrin stated and reached for his mug of tea. He held it up as if to give a toast.

Bekar smiled and held up her mug. Bearin hoisted his aloft. Chandro looked at Jan-nell and raised her mug. Moving her eyes from face to face, Jan-nell finally raised her mug. “To our family,” Khrin said in firm tones.

They all drank. When they had replaced their mugs, Khrin asked Bearin another question. “These pairings? Are they between boys and girls—er, men and women only?”

Bekar leaned away from the table as if to watch what would unfold and allow the boy a clear view of his mother.

Bearin did indeed study his mother’s face and then passed his eyes over Chandro and finally rested them on Khrin, who looked worried. He shot Bekar a glance that was more question than observation. Bekar nodded once. The boy looked again at his father’s face. “Be at peace, Father. I know where you go, and I know that Mother’s heart has not been here but up on the mountain. There is love here, though, and I feel it from both of you—and from Bekar, who is my mother-kin. But as for me, I do not know who will capture my heart. I cannot bother now because there is too much to learn, and I do wish Granddame would stop trying to make a match for me. I do not think my heart could stay for long with one of these girls, though I might one day wish to give it.”

Bekar clapped the boy on the back and dug once more into her mashed parsnips and prairie hen.

Chandro cleared her throat. “So, Jan-nell and I will leave on the morrow to go up mountain to hear old Dekla’s gossip. Will you be coming, Bekar?”

The hunter shook her head. “I am showing Bearin how to lay traps along the animal trails. We need to check them on the morrow.”

“How long will you be gone?” Bearin asked.

Still thinking about Bearin’s words, Jan-nell struggled back to the topic of her trip up mountain. “I would think several days.”

Bearin frowned. “I wish I could travel with you. I would like to meet my sister one day.”

Bekar closed her eyes as if she had heard the request before.

Chandro tried to comfort. “She will soon take her place among the hunters as a trackfinder in one or two more summers. Perhaps then I will bring her down mountain.”

The boy nodded but was not appeased. Bekar put her arm around the boy’s shoulders and pulled him into the briefest of hugs. “Some day,” she said, and he nodded again.