Vin and the Dorky Duet

The moment he walks through the door and sees the sharky grin on his older sister’s face, Vin suspects Meg is hatching a plot. He’s right. Worse still, he’s central to the outcome. Meg tells him that their music teachers, parents—everyone—expect him to play her duet for trumpet and piano at the upcoming student concert. Vin is horrified.

Meg insists that his only escape route is to persuade another trumpet player to take his place. She has the hunky Brad Stewart in mind and challenges Vin to introduce her to him. Vin doesn’t know Brad any better than Meg does, but she points out that Vin is in two classes with Brad’s nerdy brother. Eyeballs Stewart is the last person Vin wants to befriend until Meg’s promise of a David Beckham autographed soccer jersey changes the seventh-grader’s mind. He has five days to accomplish his mission—Operation BS—before the concert practice schedule kicks in. His game plan, thwarted by exploding fish tanks, magnetic compost heaps, man-eating bubble baths, and other disasters ultimately succeeds, but not exactly as Vin expects. 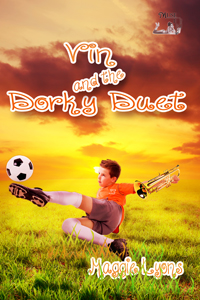 Vin and the Dorky Duet

We put the leash on Krypto and the Great Dane pulled me down the driveway. As we passed my bike, this really cool idea popped in my head. I hooked the leash over the handlebar, sat on the bike, and yelled, “Mush.”

Krypto trotted out of the driveway, towing the bike with me on it. We turned right and headed down the sidewalk. On the driveway ahead of us Gran-Gran’s neighbor Gandalf—that’s what Meg and I called him because he looked like an ancient wizard—was taking mail out of his mailbox. We were a few feet away when Gandalf’s cell phone began to ring.

That was magic music to Krypto. He lifted his ears and took off like a Saturn V rocket. The dog, the bike, and I headed straight for the old man. I pulled on the leash and yelled at Krypto to stop, but he ignored me.

I tried to steer the bike, but the handlebars wouldn’t turn. Gandalf seemed to be hypnotized by Krypto and didn’t move a toe. We were three feet from him when he managed to jump out of the way. Krypto didn’t stop. He charged ahead, taking the bike and me with him.

The wind we stirred up as we rushed by blew Gandalf’s white hair all over his face and he dropped the cell phone, which continued to ring. When Krypto finally realized he was headed away from the magic music, he wheeled to the right. His leash came off the handlebar, and he boomeranged back to the phone, but my bike didn’t. It hurtled around the side of the house toward a large pile of something I didn’t have time to inspect. The front wheel struck a low fence and the bike catapulted me headlong into the waiting pile.
The smell told me everything. I’d found Gandalf’s compost heap. It oozed all over me. Gandalf must have just put some fresh garbage on it because fumes rose—well, almost. The mess stuck to my hair, my pants—you name it. It stuck and it stank. It could have been worse, though. My mouth could have been open.