When the curtain fell back into place, however, there was no dawning knowledge, there was no blinding accuracy in simply knowing. Instead there was silence.

Frustration was the name of the game at this moment, and it was not something that she enjoyed. At all. Frustration was a bitter pill to swallow and one that more often than not got stuck in the craw of one’s throat.

Rubbing the back of her neck, Violet turned away from the conundrum that was before her. She leaned back in the seat she took outside of a cafe and sipped at the cocoa that she had been given and tried to think of what was going on.

Pulling out her old ratty notebook she fished out a pen from the bottom of her backpack and wrote her notes into the old-fashioned notebook.

While there was a presence inside of the home, there wasn’t a response when the bell was rung, nor was there when a delivery arrived via courier. Suspiciously there was another person who arrived to let the delivery in, however from where the party came from I don’t know.

Vi chewed her pen cap and then tapped it to her lip before she continued.

The being inside of the home is not a human. I can tell that much from the sidewalk. I’m not certain just exactly what the race is for this being, however I have to be honest here–the feeling is malevolent and the malcontent that is all but pouring out of the home is nearly blinding.

She had to shiver. She didn’t like it at all. There was something more about this job than just trying to figure out exactly who or what was inside of the home, she didn’t like that.

I keep finding myself questioning this assignment. I keep finding myself wanting to walk away from it, and if not for the plea from the woman on the other side of this equation I would have walked away by now. If a major change doesn’t occur within the next two days I am walking away. I have found nothing as of yet and can’t shake the feeling that I’m being set up for some reason. I just wish that I knew what it was that I was being set up about.

Words she quickly scribbled out and then pulled the page out to tear into small pieces so that she could dump them into her coffee cup to toss away. Violet sighed and closed her eyes. God, she was not in a good place right now. Not with this assignment and with anything.

Quickly Violet shoved her pink and blue hair back behind her ears. The short hair in the back, long in front, a far cry different from what she was born with. The only thing Violet couldn’t change was her eyes. Eyes that denoted exactly who she was, the status and hierarchy that she held. If she wanted it. But she knew that to take the position that she was born to take would mean her death.

I believe that this being that I’m chasing, this Luhpyne that is supposed to be harming children and women, is not an actual person, but a set of persons. I don’t truly believe that the being in the home is a human, but I don’t get the feeling that they are Luhpyne either. I truly believe that whatever, whoever is inside of that home is evil and therefore it’s time to turn this case over to the AEDA. I just hope that I can turn this into them without whoever I talk to realizing just what, and worse, who I am.

She hesitated and bit her lower lip. Yeah. That would not be good. She had come to Earth far before the Veil fell. She had hidden when yet another attempt on her life was thwarted. An attempt that had cost the life of one of her oldest and dearest friends. A Draygon.

It was when that happened that Violet went to the only being she could trust, Drakos. King of the Draygons, he realized just who and what she was and realized that she held a secret. One that she kept close. No, Drakos was an honorable and good man and helped her to disappear onto Earth. A land that the Races viewed with disdain from afar.

Violet, however, lost herself on Earth. She had flitted from city to city and watched the humans as they learned, as they grew, and as they finally began to make advances into technology.

“Shit,” Violet grumbled and shoved all of her stuff back into her backpack.

She knew that it was time to turn her files over to the AEDA and disappear. She hadn’t talked to Drakos since he helped her to hide the first time but now that the Veil had fallen, perhaps she should reach out to him again. Maybe it was time to lose herself in one of the Realms since someone had obviously found her here on Earth.

“Fuck.” She all but moaned that singular word when the new angle of her body opened her fully for both of their rather large hands to tease and worship her skin. “That feels so damn good.” It had been far, far too long since she allowed herself to feel anything like this, and even then it felt nothing like this was feeling, because no one had been her mate until now.

Ladon rubbed his fingers over her pussy, between her folds and through the moisture there. Sliding his fingers back, he spread her juices to her anus. Over and over he did the same, each time he rubbed more to her ass, pressing in a little each time until he breached her with a finger. “Gods, you’re so fucking tight,” he growled out next to her ear.

“More,” was all that Violet could say in reply. She was tight because she had never, ever allowed anyone to touch her there. None had ever felt right but she knew that these men were right. They were hers and she was theirs, for now and for the rest of time. She belonged to them as they did to her. “Again,” she begged him. “More, I want everything with the two of you. I finally want to feel whole.”

The sensations were amazing, the feeling of these men touching her as they did. It was perfect, and their hands seemed to move in perfect harmony. Violet finally looked up at Viper and her breath caught in the back of her throat. This was what she needed. Him. Them. Everything. “God yes,” she moaned. “Perfect.” She whimpered. “Please, kiss me?” She requested of Viper. She needed more, needed that connection and was desperate to forge it with them.

Dipping his chin, he brushed his lips to hers slowly. He nipped at her lip right when Ladon pressed his finger in deeper, slowly stretching her. Viper captured her moan with a deep kiss while Ladon began to slowly stroke his finger in and out of her ass.

Violet shivered and jerked, her body was moving in desperation and need. When she parted from Viper her eyes were glowing, the need was there just as it was on her Draygon. “Please.” She whispered that singular word for him and Ladon alone. She would never beg another being, only these two men.

“Hold on,” Ladon said next to her ear. “We still have to stretch you more, you’re so fucking tight, sweetheart. You cannot come, though, no matter what, you can’t come without us. Remember that, and if it becomes too much, say something, we’ll take a breather until you’re balanced again.” She felt him stretching her more. “Working two in now, Vi.”

Vi nodded and let her forehead drop to Viper’s chest. She was clenching her hands on his arms tightly. “I won’t come without the two of you, I need you both far too damn much for that.” She needed that connection to them both, had to have it, or she knew she wouldn’t be able to continue on with this life.

Viper slid his hands up, one on her arm, the other to the back of her neck. “Keep breathing,” he said softly. He nipped at her ear gently before he rested his cheek to hers, the stubble on his cheeks lightly scraping her skin.

The tactile sensations of Viper nuzzling and teasing her skin and the stretching and teasing that Ladon was doing to her backside had her gasping for air. “Gods. That feels so good.” They hadn’t even touched her clit and already she was about to go off like the proverbial rocket. She saw stars behind her eyelids, she was gasping for air but forced her orgasm under control. “Hurry,” she demanded instead. “Not going to hurt me, not when I was made for you both. God, please hurry.”

“You’re too tight, Vi. I don’t want to hurt you,” Ladon growled.

“She’s on edge, Ladon. We can’t risk having her go over. Take it slow, but we need to do this now.”

“Shit,” he muttered. “I really wish we had some lube.”

“Check the bedside table, knowing Drake there’s likely some in there,” Viper said.

Violet’s eyes were closed as she clenched her fingers against Viper’s shoulders. She leaned in and bit his shoulder, she couldn’t seem to help herself. She was desperate and she damn well needed and wanted both of them to be right there with her. She wanted to shake that indomitable control that Viper had on himself, she wanted to see the Draygon that was hers. Dammit.

“Behave,” he said, his voice taking on a sharp edge.

“Got some,” Ladon announced triumphantly. “Vi, hold on, sweetheart. This is likely to be damned cold. But I need to work some up your gorgeous little ass before we start. Try not to clench too hard if you can.”

“Working on trying, but then Viper tells me to behave.” She looked up at said mate and grinned. “Do it, Ladon,” she said, but her eyes never left Viper’s, she was utterly mesmerized by him. “Hurry, don’t care how fucking cold it is, because soon we will be burning hot.” 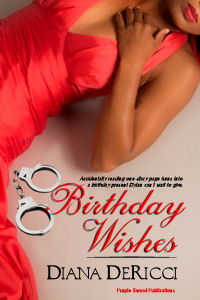