The best-selling gay romance series by Matthew J. Metzger is now available in a box set! Contains the stories:

Vivaldi in the Dark: Jayden's course changes when he falls for dry violinist Darren. But all is not what it seems, and Jayden is confronted with a dangerous depression that has brought Darren to the edge more than once, and undoubtedly will again. Darren's talent is his own undoing -- until a mugging takes the music forcibly away, and Jayden has the chance to change Darren's life and, quite literally, his mind.

The Devil's Trill Sonata: Jayden is going to university. Dream-chasing and distance have Jayden thinking a break-up with his boyfriend is inevitable -- but they've weathered worse storms, right? Wrong. As their relationship fractures, Darren's depression strengthens -- until one night, a rejected call, and drastic action. Too late, Jayden learns where his heart truly lies. The dream is over -- and the reality is far, far worse.

Rhapsody on a Theme: Their relationship has been repaired since Darren's overdose, but Darren has not. When two attempts at medication fail badly, his partner Jayden fears that the end of this depression will only come with the end of Darren himself. Until Darren is asked to play at Ethan's upcoming wedding. As Darren slowly returns to the music that never quite left him, the shadows finally begin to fade. 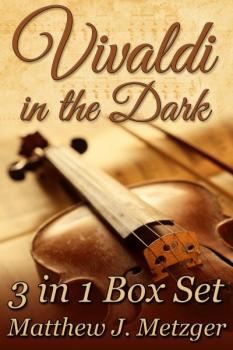 EXCERPT FROM "The Devil's Trill Sonata"

His phone lit up on the wood; one of the professors gave him a cold look as it chimed loudly in the quiet hall, and Jayden cancelled the call, flushing furiously. He felt a little bit bad about not answering last night, truth be told, because Darren didn't actually call often, he was more of a text person, but it was half eight in the morning, for God's sake. That Darren was even awake at half eight in the morning was some kind of miracle. Did he have an early start on Thursdays? Jayden couldn’t remember.

He sighed heavily, a little too loudly, when the phone started ringing again, and snatched it up, leaving his half-eaten breakfast and sweeping out of the hall. He could just promise to call him tonight, maybe, if he got his Chaucer analysis done in time, which ... okay, which he wouldn't. Out of the corner of his eye, he saw Leah throw down her napkin and get up, and hoped she wasn’t going to take the chance to yell at him again. He regretted blowing her off to go to the stupid thing with Ella and Jonathon already, he didn't need telling. Why couldn’t everyone just leave him alone?

“Hey, Darren, this isn’t really ... he began, and stopped dead when it wasn’t Darren’s voice -- or even close -- that interrupted him.

“Who is this?” he snapped, feeling a headache starting. Great, now one of Darren’s stupid bloody mates thought it would be funny to bloody mess with him, and this really wasn't the day for it, and ...

“It’s Rachel,” the girl said, and Jayden’s irritation ebbed a little. Rachel was alright; he’d kind of liked Rachel, mostly because she bullied Darren like Scott had and he’d always thought Darren needed a bit of bullying now and then, to keep even and keep him from just being a lazy waste of space.

He flinched when Ella’s choice of words rose up in his mind.

“Why are you ...?” he began, and paused when she sniffed. The annoyance paused as well, listening intently. “Are you crying?”

“Yes, I bloody am!” she snapped, and a wet sort of sob echoed down the crackly line.

“Whoa, what’s ...” the anger had gone completely, and in its place, a cold wash of dread was flooding his system. “Rachel, why have you got Darren’s phone?”

“You need to come here,” Rachel said tearfully. “I just ... I don’t know, he’s been ... he was a bit funny this last week, like quiet, and he was really tired the last couple of days and he got back late from work yesterday and when I stuck my head around his door at seven he was dozing with some music, so I just left him to it, I thought he needed the sleep, but then he didn't get back up last night, he was just playing the violin all night, and he didn't go to early shift this morning and ...”

“He’s in the hospital,” Rachel blurted out, and hiccupped wetly. “I checked on him this morning because he's supposed to go to work for eight on Thursdays but he didn't go so I went to check on him, and ... I think he took an overdose, Jayden, he was just sprawled out in bed in his uniform and I couldn’t wake him up so I called an ambulance and his lips were blue and he'd been sick, and you have to get down here, you have to ...”

She was crying, and Jayden felt ... oddly detached. The cold panic had frozen his mind, and he was breathing too hard but it didn't occur to him to correct it; he vaguely noted he was sitting when Leah’s knees appeared level with his head, and Rachel’s panicked crying was surrounding him, her words indistinct and foreign now, like she was speaking Swedish, and ...

And Darren had taken an overdose.