These are the exploits of Echo Squad, the premier squad of the Walker Brigade, consisting of twelve men and woman of the Federated Union of Planets Stellar Army Corp.

Max Jones the Squad Leader of Echo Squad, was a military brat whose father is a Fleet Rear Admiral in charge of the 2nd TechCom, an intelligence unit based on Pacifica. He has made it on his own without his fathers help but has been given opportunities by his father in order to advance his career. Although Max doesn't appreciate the opportunities, he does carry out any mission he is assigned to the best of his abilities.

Max believes in honor above all else. He believes in what he is doing and the Federated Union of Planets. He is proud to be a member of the Walker Brigade. He is a master tactician and strategist and should be at least four grades higher but does not want to give up his squad or take on the responsibilities of the promotion.

Currently a Squad Second Becky Latham should be leading her own squad but due to insubordination charges she has been held back. She was born on Pacifica and has worked in the past as a model on the TriV. Little else is known about her prior to joining the Walker Brigade.

These are the tales of those twelve men and women as they serve in the Federated Union of Planets Army. 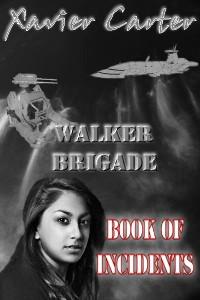 We were patrolling an area twenty miles square just behind the colonial marine's lines, looking for M'roby infiltrators. We had been out here for eight hours with no sign of a M'roby anywhere. Two more hours and we could head for the barracks and some hot chow. Field rations are ok, but nothing beats hot food in a tired body. The fact that we could all catch a hot shower was just icing on the cake.

"Team Three, Team Two, converge on contact bearing oh-oh-niner degrees from Three-Threes position. Team One, hold your pattern. Second Latham, keep me updated," I shouted as I continued on my search pattern.

"Contact bearing two-seven-oh degrees," Sensor scout Barr shouted. That was behind us at the current time.

"Team One converge on contact at two-seven-oh degrees." I wheeled around and headed for the contact. Flipping down my distance viewer, I cranked up the magnification. There were four M'roby running like crazy toward us, two miles in front of us.

"Team One slow to one half speed. Contacts are headed right at us."

"Chief, our contact is a marine transport headed for the port."

"Aye, Second. Get your team turned around and headed our way, we have four M'roby comin' at us."

They would be here in a hurry; just about the time we made contact with the M'roby. The M'roby looked like they were in a hurry to die. They were coming at us at full speed. Maybe they thought they could just blow right through us. Probably thought we were colonial marines.

"Team One stop and cover, wait for my signal to open fire. They are coming at us fast so let your automatic gun sights take control." I stopped and stepped behind a waist high boulder, flipping my guns to auto-sight. All six started tracking, following my eye movements.

"Chief, we're two klicks away." Becky, letting me know where they were.

"Roger. Team One open fire." The noise was deafening until the noise dampers kicked in. Plasma bolt, particle beams and collapsed aluminum, shot out towards the M'roby. All four were vaporized in an instant.

"Weapons on safe, all troops weapons on safe." Didn't want any accidents, although they're not supposed to be able to fire on friendlies, better cautious than dead.

Becky's team showed up just as the smoke was clearing. Charred M'roby remains were scattered all over the plain.

"Aye, Chief. Team One, you heard the man, move it out." And my team was gone, leaving me and Team Three to sort through this mess.

"So, this is what happens to them when you hit 'em with everything you got?" Becky was joking I knew, but her squad mates didn't. They looked a little uncomfortable. Being green themselves, they may have thought Becky was a newbie too. All except for Ernie who was grinning like a Cheshire cat as he scanned the area.

"You see any weapons?" I was looking around and couldn't find a single weapon among the mess on the ground.

"No, I don't. You don't suppose these were civilians?"

Good question. Were there such things as M'roby civilians? Don't know, I'm just a lowly Chief, they don't tell me much.

"Don't know. Maybe they thought we were marines." I kept scanning for any signs of weapons or ammunition.

"Okay, Latham, get your team on a sweep, oh-nine-oh through one-eight-oh half speed. Execute."

"Aye, Chief. You heard the man, move it," she bawled to her troopers. "Barr, I want full power sweeps, understand?"

I stood and surveyed the ground where we had just blown four M'roby to vapor. Well not quite vapor, but close to it. There was a green haze covering everything in a hundred-meter circle, and little bits and pieces of exoskeleton scattered about. Well if they all went down this easy why the fuck did the marines need help?

Our patrol didn't last too much longer after running into those M'roby. The Chief and I spent about an hour together after the patrol writing up the After Action Report to be forwarded to the Company Commander.

Being this close to him was causing me some problems, but I hoped I could manage. He was so, so, so hunky. All I know is that I wanted him, wanted him bad. I don't know why, he just caused my insides to churn with desire. I was determined to get him into my bed and into me as soon as I possibly could.

After lights out, I lay in bed thinking about him, and came to the decision I would bed him the next night, come hell or high water.

I drifted off to sleep with thoughts of him and me together.

Leader of the Pack
Leighann Phoenix
In Shelf
$8.99