With a new job in a new city and two love interests vying for her attention, what's a girl to do? Art Gallery Assistant Tam Wilde experiences the highs and lows of new love with nightclub owner Michael Dawson. But when she takes on a job working for industrialist Xavier Clark, her relationship with Michael suffers a serious blow once Xavier reveals an unlikely, but true past he shared with Tam. He wants her again and is determined to have her, no matter the cost. Tripping through a Wanderland of twists and turns, in the end, Tam makes a decision for the betterment of her family, ultimately leaving one man broken and the other complete. 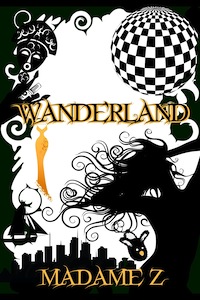 “About the other day, when last we spoke….”

She offered him nothing except an open expression.

“I didn’t mean to upset you by telling you the truth.” He took a step closer. “I only wanted you to remember...to know who I am.”

She looked down, placing the glass on the shelf. God, he was a narcissist. He wanted validation? She’d give him validation.

“Okay,” she stated simply. He frowned. Did he want more?

“I remember you, Xavier. Bits and pieces, nothing too specific. So don’t ask me to try.”

“That’s good.” He nodded more to himself than to her.

“Yes, we’ve established we knew one another once upon a time. As wild as it might seem—” she waved a hand “—we were...playmates, at times, but that’s it. That was then and this is now and now, we work together—”

He crushed her mouth with a heated kiss, burning a hole into her brain by pressure of his tongue dipping lightly into her mouth. Just as on the night at the club, her hands flew to his chest, to push away, to hold on, or maybe both. She returned the kiss with a mixture of trepidation and excitement and ultimately pulled back, for fear the action would progress to something else.

She should’ve seen it coming. Actually, she had seen him moving closer and closer, centimeter by centimeter, progressing at such a slow rate, it was almost impossible to detect as movement. One second he stood opposite her, and the next he had pulled her to him, holding her face with one hand, tilting her head to just the right angle to receive the kiss she also knew would come.

She managed to pull back from the kiss, from his caresses. He glanced to her again, eyes molten with a deep-seated heat. They seemed to question, to consider the possibility of what next, and if she would allow for a what next.

Luckily, his phone rang, interrupting any course of action he would’ve taken. He released her, righting himself, then took the few paces to the desk to answer.