In a not too distant future, the island of Manhattan has been commandeered by rebels aided by terrorists who have set themselves against the U.S. government. The Brooklyn Bridge, now fallen into disuse, stands as a sort of "no-man's land" between the island and the military that patrol the Hudson River. When the rebels bomb the Bridge, the nation is plunged into what might become a second Civil War.

Captain Jace Rickert is a grounded pilot whose Army lover, Second Lieutenant Tomas Tait, is sent on a routine reconnaissance mission. When Tait disappears and the military can’t stop the impending war to find one missing soldier, Rickert takes matters into his own hands. 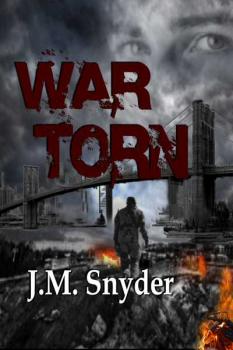 Coffee Time Romance: 5 out of 5.
"The raw emotions this book portrays goes beyond ordinary. The futuristic setting is very well written. Snyder's fast paced plot and vivid scenery make War Torn a fascinating read ... the must have of the summer!"

Fallen Angel Reviews: 4 out of 5.
"The selfless love between Jace and Tomas is the rock around how they live their lives and respond to everyone. The setting upon which this story is based is very realistic and shows us what we could face as a world if people continue to be unwilling to work together for a better tomorrow. Thanks go to Ms. Snyder for another look into a world where human feelings are in the end the most important things of all."

Literary Nymphs Reviews: 4 out of 5.
"Snyder has created a dark, war torn future with a strong and beautiful love story in the midst of it all. Jace is a great character; you'll be pulling for him as he has his own obstacles to overcome throughout his journey. J.M.'s writing is wonderfully descriptive; I experienced much of the journey right along with Captain Rickert."

My Book Cravings: 5 out of 5.
"A poignant, heart-wrenching story ... of one man's race to save the most important person in his world ... one of the most emotionally profound books I've read in a long time. The sensual love scenes add to the emotional aspects of the relationship between Tomas and Jace. This book will touch your heart and stay in your memory for a long time. Don't miss out on this amazing book!"

Pulp Fiction Reviews: 4.5 out of 5.
"After the first section, I was hooked. The love scenes are sensual more than sexual, the love and romance key to what makes this story so wonderful. The plot is very clever, and the nuances between lovers who are also soldiers spoke to a writer sensitive to the inner workings of his/her characters."

Rainbow Reviews: 5 out of 5.
"One of the best books I've read this year; the plot, characters and dialogue are all top-notch. It's an emotional story that moved me in so many ways. I found myself laughing at Tomas's antics, scowling at Alden's sadness, aching at Jace's sorrow and cheering him on as he risked everything he held dear to find the love of his life. I encourage you to read [it] and experience fine, romantic writing at its best."

Review by Frost: 5 out of 5.
"The special kind of story that makes me wish to pin more than 5 Swords on it: a story which had me smiling, weeping, shuddering, and yearning all through to the end ... War Torn ripped a hole in my heart and then filled it back up. I can't find words to recommend this very special story highly enough. I do know I won't soon forget its message, or its touching heroes."

Sensual Reads & Reviews: 3 out of 5.
"A first class story that shows no matter who you are the love shared between two people never diminishes. Snyder touches the lives of anyone who reads her. I for one am never disappointed."

The Romance Studio: 4 out of 5.
"This is a well written love story. The characters are strong, loyal to their friends, lovers and compatriots ... I enjoy Ms. Snyder’s work immensely but this definitely isn’t light reading."

Two Lips Reviews: 5 out of 5, with a "heat level" of 1 out of 3.
"A haunting story of love and the determination to prevail over circumstances. It is beautifully written as the prose brings to life Jace's emotions and his struggles to reach his lover ... leaves a long lasting mark on the reader."

When I open the door Alden whirls into my house like a dervish. "Are you seeing this?"

One look at his wild eyes and I'm awake. "Seeing what?"

I watch him fumble with the remote, and then the TV's on, a cacophony of noise that fills my house like the dread bubbling within me.

"It started," he says, stopping at the first news channel he finds. A windblown reporter covers one ear and talks into a microphone, his words staccato bursts that explode in my mind. Bombing began last night...

In a daze I walk over to the TV, mesmerized by the images of blood stained men in camouflage and fatigues, stretchers and weapons and my God. Oh, my fucking God.

I wrest the remote from Alden's hands. "Bombing where? Turn it up, Alden, I can't hear it. What did they hit? Turn it up!"

But I still can't hear it, I can't hear anything and all I can see is blood. "It started last night, sometime after midnight, caught our camps off guard. They say almost a hundred dead, a few dozen missing, and that's just the beginning. Jace --"

He starts to flick to another channel and I punch him in the arm, hard. "Stop it! Jesus, just let me hear it, okay? Don't go changing channels just yet. I don't know the whole story --"

"Shut up!" I push in front of him until the TV fills my entire world.

I want the reporter to stop talking about the casualties and start naming names, even though I know they don't do that on national television. I want to be there, at the Bridge, amid the blood and the dead and the dying, I want to know ... "Jesus." There's nothing else to say. "Where the fuck is he?"

Behind me Alden answers, "I don't know."

With one hand I wipe my face, surprised when my palm comes away slick with sweat. "Tomas," I whisper, but it's more of a sob and when my deep voice breaks that's it, I can't deal with this. I can't handle not knowing.

Sinking to my knees on the plush carpet, I tell myself the sting in my eyes is more sweat, not tears. I'm not crying because I don't know anything yet, and I'm not going to give in until I know what's happened. Please, I pray. I'm not sure who I'm praying to or what I'm praying for, but I'm not going to stop until I see my boy again. Please.

Alden makes me a strong cup of coffee; even though I can taste the brandy lacing the brew, I drink it down without a word. Together we sit on my couch and watch the TV, changing channels during commercial breaks and learning nothing new, nothing at all. Outside activity has picked up -- we can hear large transports rattle past my quarters, heading for the barracks and the squads ready to join in the fight. Choppers fill the skies, the heavy beating of their blades drowning out the TV when they fly overhead.

On every channel it's the same thing -- different voices but the same images, the same words. American forces were bombed shortly before dawn ... shelling hit the middle of our military camps ... those at the center dead, dying, or wounded and not expected to survive ... the death toll over a hundred now and rising as rubble is cleared away and more bodies found ... For the hundredth time, I ask, "What about Tomas?" 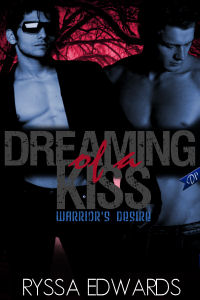 Dreaming of a Kiss
Ryssa Edwards
In Shelf
$5.99
Tweets by
sirenbookstrand