Amber Williams thought she was losing her mind—until everything she’d prophesized came true. Learning she’s one of the Oracle’s receptacles was unnerving, if not necessarily surprising, but it’s the warlock and the vampire sent to protect her that creates her most interesting problem.

But will the attraction Amber, Darian, and Wilson feel be a fatal distraction when the traitor brings their idyllic fantasy world crashing down around them? 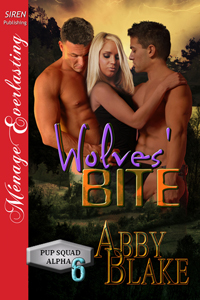 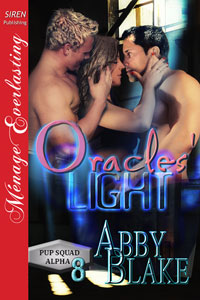 Amber shook her head sharply. Less than a minute ago a seriously weird thought had popped into her head, almost like some sort of vision. She’d dismissed it as more of the same gobbledygook that had filled her mind over the past few weeks.

At least she’d thought it was gobbledygook until a damn vortex exactly like the one from her “premonition” opened in front of the car. She’d slammed her brakes on and now currently sat staring through her front car window at the four men who’d stepped out of it.

“Amber Williams?” one of the men asked.

Okay, so now she knew for certain her brain was broken. Handsome, soldier types did not step through strange swirling tunnel thingies and ask for her by name.

“Uh-huh,” she said with a nod. What could it hurt to confirm who she was? It was very obvious they were some sort of delusion. She smiled slightly. At least she had enough mental fortitude left to create good-looking men. Although, the one who looked like a motorcycle rider and was covered top to toe in black leather and a dark helmet seemed a little out of character even for her wild imagination. Her fantasies usually bent more toward the charming-smile, Armani-wearing guys than the rough-and-ready bad boys.

Tall-dark-and-handsome and his motorcycle buddy stepped closer to the car. The other men went in opposite directions, seemingly alert for some sort of trouble.

“Have I given you names yet?” she asked in a pleasant voice. They looked confused by her attitude, so she shrugged. They may as well get to the good stuff before she woke up. Although considering she didn’t remember going to sleep, waking up might be a tough ask. Maybe she should have thought harder about her boss’s offer to get her a shrink. It would appear that the relaxing road trip to clear her head and de-stress wasn’t working very well.

“Amber,” helmet guy said in a surprisingly clear voice. Considering the design, the deep whiskey voice should have at least been muffled a bit. “We need to get you to a safe house. Assassins have been sent to kill you.”

Whoa, way to go, imagination. She’d never added intrigue and danger to her fantasies before. This should be a lot of fun. “Seriously?” she asked, trying to play her part of damsel in distress.

Wilson Jones didn’t like the way things were going. Amber was way too calm for someone who’d just been told that sort of news. In fact the woman even looked happy.

“I had no idea my imagination was so good. If someone had told me how much fun a breakdown was going to be I would have had one way earlier.”

Well, that explained the attitude, but it left him with another problem. Did they waste time trying to convince her she wasn’t delusional, or did they grab her, get her to safety, and then try to explain? Before he could really decide which way to jump, one of his mission partners, Darian Hawkes, made the decision for him.

“That’s right, princess. We’re your knights in shining armor. Just grab my hand and we’ll show you a life you’ve never even imagined.”

“I don’t know,” she said, frowning suspiciously. Of course the woman would choose now to start being distrustful.

“Amber, sweetheart,” Wilson said as he moved toward her, “we need to get out of the open. We’ll protect you. I promise.”

“How do I know you’re not the assassins?”

Darian seemed out of patience. “Because, princess,” he said as he stepped closer, dropped his arm, and lifted Amber out of the car and over his shoulder, “you’re not dead yet.”

Before Wilson could utter a protest, Darian opened a bounce tunnel and stepped through. Unwilling to leave the woman alone with a fellow teammate acting so out of character, Wilson followed.

“You’ll feel everything more keenly without the hair,” he said, running his fingers over her pussy lips once more. “Turn around and bend over.”

She felt her eyes widen at his request, but took a deep breath, turned around, and stuck her bottom in the air. His hands glided over the wet skin, his fingers sliding up and down the crease of her ass as he knelt behind her. She shivered as his tongue touched her denuded folds, his fingers pushing up into her pussy as he continued his “inspection.”

Over and over he wriggled his tongue over her pussy, his fingers curling inside her and hitting a spot she hadn’t known existed. She was on the verge of orgasm, shaking all over, ready to explode into a million tiny pieces when he pulled away.

She whimpered her disappointment, but the hard slap on her butt cheek stole her voice.

“Quiet,” he said, caressing her spine in soothing, sweeping motions, keeping her on the edge of arousal but not letting her fall over. “You don’t get to decide when you come. That’s my decision, and since this is punishment…” His words trailed away as he thrust his tongue into her pussy, spearing into her over and over hard and fast.

She was shaking, shivering, quaking all over when he pulled away once more. She couldn’t call back the whimper that escaped her. The harsh slap barely hurt at all.

“Don’t you dare,” Darian said with a soft chuckle. “If you come again without permission, your punishment will be far worse.”

“Just for curiosity’s sake,” she said breathlessly, “how much worse?”

He laughed again, this time the sound taking on a much darker tone. “I will tie you to the bed, and fuck you over and over without letting you come. I have ways of stopping your orgasm. At the moment I’m asking for your self-restraint, but I will use sneaky warlock measures if you misbehave.”

She nodded, not doubting him for one moment. She took a deep breath, let it out slowly, and tried really hard to take her arousal down a notch or two.

“Good girl,” he said, thrusting his fingers into her pussy and undoing all her good work. She was so close to going over the edge that this time she actually sighed in relief when he pulled away. She lost count of how many times he brought her to near orgasm and then forced her to relax. When he finally turned her around, lifted her against the smooth rock face of the waterfall, and thrust his cock hard and deep into her pussy, she almost cried with sheer relief. But this time she didn’t go over, didn’t give in to her body’s baser desires, she held on to her control for all she was worth. Hell, if he could manipulate her this easily without magic, she sure as hell didn’t want to try punishment a warlock’s way.

He thrust frantically a few times, but then slowed down, fusing his mouth to hers as he slid into her pussy and held still. “Beautiful,” he said as he lowered her feet back to the ground and pulled away once more. She bit her lips together, determined not to make a sound. “Good girl.” He grabbed her arm, spun her around, pushing her hands against the wall as he pushed her legs wider and lifted her hips to where he wanted.

Escape to the Border Lands (MFM)
Marla Monroe
In Shelf
$5.50