Striking beauty Saxby Darling weds Lord Milo DeCapri and has all the world to do with as she pleases until one foolish action leaves her life in shambles. When she tries to kill her husband, he dispatches word to his brother, Juden Van Zandt-DeCapri, to come to his aid, and Juden arrives like the eye of a storm. Saxby has reason to fear Juden. She knows he didn’t come for revenge. He came for blood.

Juden is a variant, human and vampire, with an unforgiving and dangerous countenance. He immediately turns on Saxby. Unsettled by his appearance and actions, Saxby distrusts Juden right away and tries to keep him at arm’s length. The idea is impossible, however, as she is thrust into a world of twisted plots where she fears for her life and unwillingly is forced to side with Juden to save herself. What terrifies her most? Saxby can’t decide if she is fighting with or against Juden. 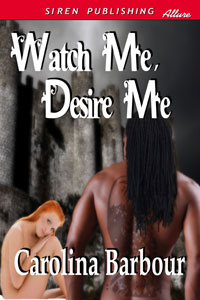 Saxby’s cheeks burned with mortification. She refused to respond and turned away seeing him pull his shirt from the pants waistband. She heard him remove his boots, place his weapons aside and sit on the edge of the bed that sunk beneath his weight. He removed his pants and tossed them on a nearby chair. When she faced him again, the air in her lungs constricted at the magnificent sight. He was completely nude, standing there like an apotheosis of masculinity. Solid and powerful, Juden VanZandt was a depiction of maleness she never witnessed before.

He was dark complexioned, lightly dusted with fine black hair, not to mention a handsome face complimented the other appealing assets. The structure chiseled, overtly masculine, softened by heart-shaped lips, slanted exotic eyes which glinted sensual and enticing mischief.

He gathered the twisted plaits and banded them behind his head, causing the ponytail to fall down his back and sway when he moved toward her.

Unable to resist, she followed his movements. Agile and predatory with a gracefulness, he walked toward her. He stood with his hands on his hips, watching, eyeing her. She dropped her gaze and followed the rippled muscles down between his thighs. To keep from gasping, she sucked in her bottom lip, startled at the sight of maleness that jutted proudly between his thighs. She shamelessly examined his phallus. For the first time she wished she paid more attention to the other men so she could make a comparison. Surely, the enormous size of his cock was normal. She stared fixated at the long, thick shaft, strawberry shaped tip, and large sacs perfectly molded that hung like a pendulum between his thighs.

He tilted forward and pressed her into the mattress. He gathered her gown and bunched the material around her waist. A sure tug and the sheer material of her drawers tore. He raised her legs, bent the knees, and spread her thighs exposing her sex. When she tried to close her legs, he moved his broad shoulders to hold her open.

Leisurely, he examined her with a practiced eye. By the time he finished she felt stroked by the heat of his observation that ignited raw pulses to shimmer inside her body.

Do not think. Do not react. He is no different from the others, Saxby thought as Juden ran a finger back and forth across the plump folds of her vagina, and then slipped it into the slit. She bit her tongue to keep from moaning when he eased his finger along her clit until moisture seeped and coated his finger.

“Your pussy is rosy, innocent pink, but we know that is not true. You are getting wet…aroused,” he murmured and nibbled the inside of her thigh. His tongue licked a path toward her pussy where he paused and then washed the end of heat over the inflamed swell and made her moan and arch off the bed.

She clutched the sheets between her fingers, fought against the urge to succumb to the salacious waves racing wildly, and strummed inside her body. Her breasts tingled, nipples swelled and tightened. A flood of wicked sensations confiscated her control. She was sick, waiting on him to enter her, hoping he would, praying he didn’t while she yearned for him to do it. Understanding it was wrong, didn’t make her want him any less and it was dead wrong to want her husband’s brother.

His tone was husky as midnight, he said, “My touch pleases you?”

Juden chuckled. “Liar.” He hummed against her mons, slipped his tongue over the damp folds to taste. His tongue was wet, hot, and prodded her to open so he could feast, which he did with the thirst of a man parched. The whip quick as lightening, slowed to an easy draw across her clit and pressure seized every nerve ending in her body. He moved his hands firmly to hold her butt and increased the tempo of lashes to maddening. The burst of bliss shot through her body and caused a small-strangled cry to escape.

“Please…” The damning words slipped out.

His grin was wicked when he looked up at her. “You concede?”

“Just do it and be quick about it,” she said, abruptly, unsure she could stand more of the delicious torment before she begged him to enter her.

The first thrust was complete and buried him deep. Saxby moaned when he partially withdrew, and then pushed with an unrestrained potency that sent a flood of exquisite feelings bolting through her body. She clutched his shoulders and cried out softly.

Juden stiffened. “I hurt you?” She shook her head no.

“Please—” she whispered, and rose for more.

The Best of Both Worlds
Carolina Barbour
$0.99
11h 8m left
Tweets by
sirenbookstrand