Simon likes to watch. Suki likes to fuck. It’s a match made in heaven!

At Maggie and Ed’s wedding reception, Suki dances with every man at the party. Her husband Simon isn’t much of a dancer. He prefers to sit back and observe as she grinds against strangers’ hard bodies. When she gives him the signal, it’s time to rush to their room at the luxury resort hotel.

Hiding behind the antique room divider, Simon waits for Suki to arrive with a man she’d only just met. Nothing turns him on better than watching his wife go crazy with another guy… especially knowing that, once the stranger’s gone, they’ll have the hottest sex they know.

But when the swaggering stranger strips bare, his body blows Simon’s mind. Even his fingers are huge! After taking a guy like that, will Suki ever be satisfied with Simon? 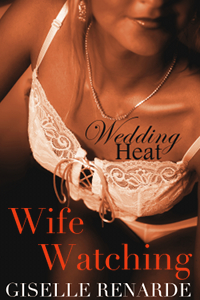 Suki danced with every man at the reception—and half the women, too.

Simon had never been much of a dancer, not even when he was first dating Suki. Even back in college, Suki would get up on the dance floor and grind against a stranger’s thigh. Simon would sit back, watching. People thought he was a wallflower. He wasn’t. Not really. He was a man who knew what he liked.

And Simon liked to watch.

At the moment, Suki hung off a man who was big, black, and built. His tailored vest and navy blue pants looked expensive, and his finely carved facial hair shouted out that he was a man who took great care in his appearance.

Mr. Big didn’t have a moustache. He had a soul patch, of sorts, and cool cascading lines echoing the bold curve of his jawline. His smile was contagious.

Over the booming music, Simon couldn’t hear what the dancing man whispered into Suki’s ear… but it made her giggle. Simon wondered how old Mr. Big thought she was. Suki had looked like a Japanese teenager until she was about thirty-seven. Even now, she looked nowhere near her age. She’d cut her hair recently, and the style made her look a little older, but Mr. Big probably took her for twenty-five, tops.

“Touch him,” Simon whispered into his wine glass. He was confident Suki could hear his thoughts across the reception tent, even if she couldn’t hear his voice. “Rub his cock. Come on, Suki. He’s so hot for you. He’s so hard…” 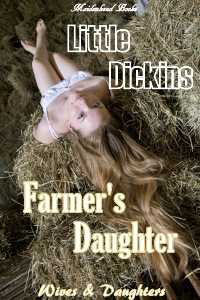