A broken-hearted Ward Cartwright left town to join the army when his boyfriend Tyler Hughes turned his back on their love and married a woman.

Ten years later, Tyler is a widower with two young boys, and Ward has returned home. He is hopeful he can re-establish his relationship with Tyler.

Even though a decade has passed, Tyler still feels tied to the family-owned feed mill. He has folks depending on the mill for employment, there are his children to consider, they live in a small town, and ... But despite this, Tyler finds there are plenty of benefits to giving Ward a job in the mill -- lots of out-of-the-way places to explore Ward’s army-honed, muscular body.

Just when Tyler resolves to live more openly with Ward, rumors begin to surface, not just at the mill, but at his sons’ school.

Ward knows the upcoming battle is just as serious as anything he’s faced in Afghanistan. Instead of fighting for his country, the soldier is fighting for his lover’s heart. Will Ward finally emerge victorious, or will Tyler’s self-doubt and fear of prejudice win out again? 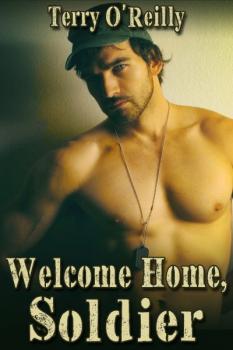 Ward’s mind went immediately to his hopes for re-establishing his relationship with Tyler. But he decided it wasn’t yet the time to bring up that possibility.

“I’ll guess I’ll help Dad and Joe with the farm. Maybe look for a job.”

“How about working at the mill with me?”

Ward’s heart skipped a beat. He wasn’t expecting this: working with Tyler! It would be like old times, hanging out together. “Yeah. I think I’d like that!”

“Great. You can start whenever you’re ready.”

“Dad’s semi-retired. I basically run the business. He can’t quite give it up, so he runs the office. That suits me fine. I’d rather work out in the mill. Throwing those bags of grain around keeps me in shape.”

Tyler was still shirtless. Ward had been acutely aware of that all evening. Tyler’s deep, smooth chest, the rippled abdomen with its blond treasure trail, made Ward recall the many hours he’d spent enjoying that body. His cock responded to the memory as well. He wondered if Tyler were thinking of those times from their past, too.

They got another couple of beers and moved the conversation back to the living room. They talked and laughed for several hours, reminiscing about their years together in high school, their old friends and where they were now, and Tyler and Ward’s exploits both on and off the football field. The only subject they left untouched was the deep relationship that they had shared. For Ward it was the elephant in the room that he tried to ignore, lest he do something that overstepped where Tyler might be regarding what they had once meant to each other.

Tyler checked his watch. “Gosh, it’s one o’clock. I’ll be right back.”

He left the room. Ward sat on the couch, acutely aware he was getting hard, wondering what would come next, and if Tyler was experiencing any of the sexual tension that filled Ward’s body.

Tyler came back and held out a hand. “The boys are asleep.”

Ward rose from the couch and walked to Tyler, taking the man’s hand. Ward’s heart was pounding in his chest, his hard cock straining against his briefs.

Tyler turned and led Ward down the short hall. Ward noticed that Tyler had closed the door to the room where the boys were sleeping. They walked past the open door of the room Jack had vacated. Without letting go of Ward’s hand, Tyler said, “That’s where you’ll sleep later. It probably wouldn’t be good for the boys to find you in my bed in the morning.”

Ward nodded, his heart pounding in his chest.

They entered the room at the end of the hall. Tyler let go of Ward’s hand and closed the door. Then the two men turned and stood looking into each other’s eyes. For a long moment, neither made any move, nor said a word. It was as if after all those years they’d been apart, they were savoring the anticipation of their long drought coming to an end. Finally, Tyler raised his hands and cupped Ward’s chin. Ward put his arms around Tyler’s waist. Tyler brought his lips to Ward’s. Ward parted his. With a soft gasp of emotion, Tyler’s tongue slipped between Ward’s lips. Then as if a dam had burst, their arms eagerly entwined around each other and their kisses became intense and urgent.