What Happens In Bangkok

Erika Bailey, owner/manager of a drag queen club in Bangkok, Thailand has happily settled into all aspects of her new life, except for her lack of a love life. When a new diva auditions, Erika is bewildered over her instant attraction to the blond God, Apollo.

Darien Scott is on vacation after a world tour and mistakenly figures the safest place to be is at The Black Dragon with the head of a Triad. When the club is hit, Darien is the only person to get out alive. Now he's running from the police and a Triad. Mistake number one.

Disguised as a drag queen, he's hired by Erika, but falls hard for his new boss, then struggles with not coming clean with her. Mistake number two.

Can he fix his mistakes and find a life filled with love or is he headed straight for mistake number three? 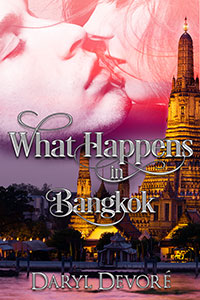 What Happens In Bangkok 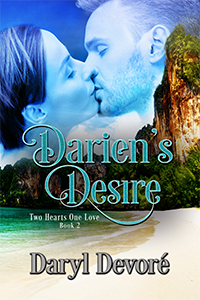 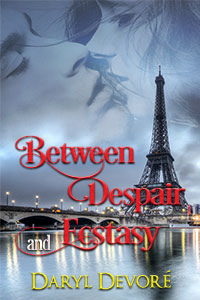 Droplets of blood seeped from Darien’s wolf tattoo, mesmerizing him. They trickled over the inside of his bicep, splattering against the bar floor.

Darien ran his hand back through his hair and frowned. Why was the wolf bleeding? It was supposed to look sexy. Turn chicks on. Not bleed. He blinked as a thought formed. Maybe it wasn’t the tattoo. Could he be bleeding? He didn’t remember getting hurt. But that might be because he’d had too many vodka shots.

An order, snapped out in Thai, ripped his focus away from the cost of the booze.

Stumbling with the translation, his gut clenched. “Check everyone. Anybody alive. Kill them.”

That’d be one of the hookers. Damn. Hope it wasn’t the one with the butterfly tattoo above her clit. She had a mouth on her that performed miracles. Dude! What the fuck! Must be the vodka talking. Stay focused. There are guys with guns out there.

Darien stretched his neck out and peered around the edge of the bar. In his line of vision, a male leg stuck out from under a table. Expensive looking shoe. Presumably Italian leather. Probably belonged to Nai Jâhng.

Darien raised his eyebrows. Wow. Somebody had the balls to kill a Triad boss.

He shifted his glance. A few feet to the left lay a female arm with brilliant orange fingernails. He shivered at the memory of those nails grazing his balls. He focused on a tiny object a foot in front of him. Shards of glass were scattered about. He frowned, trying to remember what happened. He’d walked behind the private club’s bar to get another bottle of vodka when, one by one, bottles started exploding. Next he was on the floor, looking at the blood dripping from his tattoo. He glanced at his arm. The bleeding had stopped.

Okay, so he wasn’t gonna bleed to death. Good. Now he just had to get his dumbass outta there. Past them. The guys with the guns. How the fuck could he do that?

Voices interrupted his thoughts. The tones were panicked or angry, and the words too fast for him to translate, although he did understand the meaning of the three rapid gunshots, followed by a short groan. The door at the opposite end of the bar, leading to the kitchen, swooshed as someone pushed it open.

Gunfire and loud screams sounded from the kitchen. The door swung open again. Darien translated the shooter’s words, “Nobody alive in there. I’ll check the offices upstairs.”

Darien slid back, trying not to disturb the glass. He did his best not to yelp when a sharp edge sliced through the skin on his knee. With deliberate movements, he backtracked the length of the Black Dragon’s bar. Squatting, he peeked around the end.

Three men stood with their backs to him, dressed in black pants and muscle shirts. Each one held an assault rifle. A bleeding sun tattoo visible on one attacker’s shoulder. Daeng Arthit Triad. Not good. So not good.

He looked forward. The kitchen door was six feet away. Six feet of wide-open, easily visible space. It might as well be six inches or a mile. He couldn’t risk it. Wouldn’t. He didn’t want to get shot.

He shifted his weight off the knee pressing on a piece of shattered bottle. What the fuck, dude? You’re gonna die if they find you. Better to be running for your life than just lay here and let ’em kill you. That was the logical side of his head’s opinion.

A yell and several more gunshots drifted down from the floor above. The men pounded up the stairs.

Without taking a moment to think, Darien bolted through the kitchen doors, then skidded to a stop. The rancid smell of burning food and fresh blood hit him deep in the pit of his stomach. Four bodies lay facing him, eyes wide, obviously unseeing. One of the dead chefs held a massive meat cleaver clenched in his right hand.

Never bring a knife to a gun fight. He shook his head. Quoting movies at a time like this? Focus, dude.

Heart pounding, Darien cast his gaze about the room, looking for an escape, while his ears listened for the sound of running footsteps coming up behind. He fought the nausea of rising fear as he moved forward, searching for an exit, while trying to keep his gaze from the corpses.

Please let this be some shitty nightmare, and I’m gonna wake up now. Fuck!

In the back right corner, he spotted a door. With renewed hope, he raced to freedom. He bolted through the doorway, skidded in the pool of blood, lost his balance and crashed onto the dead hooker. He tried not to be judgmental, but in the brief glance he’d had, a girl on her knees in front of a man with no pants on was obviously on the clock. Or cock, as the case might be.

He braced his hands on the blood soaked floor and pushed himself to his knees. The back of her head was missing, and her dead john had no face. Just a bloody, pulpy mess. He laid sprawled back on the desk. Big enough guy to be one of the ones who was supposed to be guarding the front entrance. Well, he went out with a bang.

The room spun. A cold sweat dampened Darien’s brow. His stomach flipped, then heaved its contents on the hooker’s cherry red dress. Gagging and coughing, he wiped his mouth with the back of his hand. The smell of tossed alcohol hit him in the face. He heaved again. Shit. Coupla hundred bucks worth. What a waste.

He dropped back onto his haunches, waiting until the spasms in his stomach calmed. Footsteps from above reminded him of his mission. Get out. Alive. Now!