What You Desire (1Night Stand)

Lacey Malcolm is searching for the one… She wants a submissive who will love her and all the bad habits she has, including all her OCD tendencies.

Second time is the charm… Her first shot at a 1Night Stand date went wrong when she got ill and sent her sister in her place. With another chance, she’s sure this time things will work out.

He’s fallen hard… Garrett Rogers has been Lacey’s best friend since college. Only in the last few months has he realized she’s the one he wants. Not wanting to risk losing his opportunity, he seeks Madame Eve’s help. The date is set, but when he shows up, things may not go as planned since he’s asking her to trade in her dominance for one night of submission.

What You Desire (1Night Stand)

“Now, please explain to me why you’re here and not Logan.”

“I am Logan…Garrett Rogers. On my application, I listed my legal name, but everyone has always called me by my middle one, so I wouldn’t get confused with my father. Thought I told you my given name when we met?” He picked up his menu then, cutting off any visual contact.

“Must have slipped your mind.” He’d tricked her, used her, and for what fucking purpose? “Like telling me you planned on manipulating me like some sub with a fetish.”

The menu came down about a half an inch, exposing those stormy-gray eyes of his. “If I’d told you about tonight, about me being your date, would you have shown up?”

She hesitated, reaching up to touch the bun at the back of her head, making sure the coiled hair held tight. The urge to lie and say yes sat on the tip of her tongue. Yet, she abhorred lying…at least most of the time. This might be one of the times she’d be willing to do it.

“Don’t you think about telling me a fib, Lace.”

Faking surprise, she batted her lashes and went for demure. “Why, I’d never.”

“The hair touching says otherwise. Remember, I’ve seen you lie before. Do it now, and I’ll make you pay for it later.” He thought mighty high of himself, threatening her like a random sub. So, he earned the truth.

“Nope, I’d have canceled right away because this is silly and foolishness. We’re incompatible.” She lifted a glass of ice water to her lips, hoping a sip would cool her heated skin. The way he talked sometimes, the way he knew her made the air seem stuffy.

“I don’t think wanting you is any one of those things.”

She coughed as a splash of water went down the wrong tube. No way had she heard him right. “What did you say?” 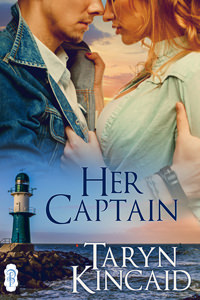 Her Captain
Taryn Kincaid
In Shelf
$2.99