Mick Charles has no idea what he’s getting himself into when he one day follows a sexy blue-haired man he saw at the market. Shy and embarrassed when he’s caught red-handed watching the man in a small café, Mick doubted he’d ever see him again…but he was wrong.

Ivan Gregori is a vampire used to looking out for danger and anything that can be interpreted as suspicious. So when Mick Charles starts following him, what’s a vampire to do?

Misunderstandings create havoc as Mick is drawn into a feud between Ivan and an old foe… but will these misunderstandings be what draw the two unlikely men towards each other and a future together?

Heat Rating: Scorching
Word Count: 18,605
49 Ratings (4.1)
Paranormal Vampires/Werewolves Alternative (M/M, Gay)
In Bookshelf
In Cart
In Wish List
Available formats
PDF
HTML
Mobi
ePub
Cover Art by Jinger Heaston
Reviews
Good short story (63 pages) and fast-paced as well. I liked how Mick "whipped" Ivan after they mated! The only complaint I have is I would have loved to see how went the audience with the Council at the end. Might have been funny to read!
Melo80
A sweet romance. I like the element of misunderstanding in the beginning that interfers with true love in the end, yet true love wins out.
keanharv2
Read more...
Professional Reviews

5 KISSES: "When Blood Beckons by Dawn H. Hawkes is a really action-packed romance novel. I really liked the fast-paced way this romance comes about. Ivan is an old vampire. He is pretty jaded. He actually needs someone to love him and show him the kinder side of life. Mick is pretty innocent in comparison to Ivan. In seeing a man he likes and following him to try to get a date from him, he demonstrates a sense of adventure he didn’t know he had. Together these two must bond before the bad guys kill them. After reading When Blood Beckons, I will be looking for more books by Ms. Hawkes. I know I will love her work far into the future." -- Tina, TwoLips Reviews

16.5/20 STARS: "What I loved most about this story was how real the characters became to me. Their responses to their environment were brilliantly written. Their story has twists and turns to keep you riveted and plenty of heat between Mick and Ivan to keep you aroused. I loved how a misunderstanding set events unfolding. There is suspense weaved in with the developing relationship between Ivan and Mick. Ivan’s devotion to Mick made me swoon, but truly it was Mick doing the swooning. No doubt, this story is hot, but a great vampire story is all about the bite and this story delivered. I couldn’t get enough of Mick and Ivan." -- Seriously Reviewed

Mick was starting to feel ridiculous. He’d been following the same guy around since he’d first seen him two hours ago, and he still hadn’t mustered up the courage to actually go talk to him. Right now, he was hiding behind a menu at a small coffee shop, watching as the guy ate a blueberry muffin.

He just didn’t know how to approach the guy. Hell, he didn’t even know why he’d followed him in the first place. The man was completely different from the types he usually went for, even if the man was both tall and muscular. Not that Mick usually had much luck with those types. Mick was cute, as people told him, but he was shy and wasn’t really the type of guy who went into anything on impulse, particularly not with a guy like this, whose hair was completely blue.

Mick, with his mousy brown hair and limited fashion sense, rarely wore something that wasn’t earth-toned or grey. In the end, Mick just really wasn’t a guy who liked to attract too much attention. This guy, however, was different. While the man didn’t wear much color, his clothes being all black, he definitely stood out. He had a few facial piercings that Mick found rather fascinating. While he would’ve never considered doing something like that, this guy was intriguing to him.

He had a spike in his left eyebrow, a piercing on the side of his nose, and, if Mick wasn’t mistaken, a little silver ball on his tongue he saw as the man ate his muffin, and that was another thing that made him stand out like a sore thumb…a guy like him, big, blue-haired, and apparently Goth or whatever they called it, and here he was in a nice and bright, little café, eating a muffin?

“Are you just gonna sit there and stare, or are you actually going to order something?” an annoyed voice asked him from his right, startling him.

Seeing the waiter, Mick blushed furiously. He’d actually been caught red-handed, staring. “Um…I’ll have a coffee…black…two sugars.” The waiter seemed to be glaring slightly at him before he nodded and headed for the kitchen.

The waiter’s behavior made Mick’s skin crawl, and when he turned back to the table with the blue-haired guy, his mystery man was gone. Damn, had he seen him? Probably. God, he must think he was some kind of freak.

Mick berated himself. He never did things like this. Sure, he might casually observe people at parties from whatever corner he’d hidden himself in, but he’d never actually up and follow them around like a desperate little puppy. For all he knew, this guy was probably a whole bunch of trouble.

Besides, Mick dated safe guys, boring, but safe guys, such as lawyers and brokers, not sexy, pierced, blue-haired guys who seemed to know a whole lot more about life than he did. He laughed at himself bitterly as he drank his coffee, which was a tad bit too sweet for his liking, but seeing as the waiter still glanced at him with narrowed eyes at times, he didn’t really feel like commenting on it. Wonder if the people here are homophobic or something? Mick quickly drank down the rest of the liquid, something he immediately regretted as the still-warm drink scalded his throat.

Reluctantly, he headed over to the counter and asked for a bottle of cold water from the waiter before he quickly exited the place, eager to get away from the man’s deadly glare. So much for customer service.

Sensing the arousal wafting off Mick in powerful waves as mating pheromones were released into the air, Ivan growled. The scent was powerful and seductive and, best of all, it meant the approval of his mate.

He gently licked and kissed Mick’s pale neck, letting his tongue piercing slide across the pale skin before nipping at it and teasing his mate, who’d begun to squirm and had started up again with those pleasured little whimpers of his, which came out almost as small purrs.

“Ivan, please,” Mick whimpered when Ivan let his sharp fangs bite into the flesh of his mate’s neck.

The transformation had intensified the taste of Mick’s blood and Ivan drank deeply, feeling the warm, thick liquid pour down his throat. At the sound of desperate moans, he let one of his hands travel down Mick’s chest, his fingers barely grazing across his stomach, which made him arch as he let out a small cry.

Reaching the waistband of denim jeans, he undid the buttons before letting his fingers slide underneath. A not-so-small cry followed as Ivan grabbed hold of Mick’s long and very solid erection.

When Mick pressed his dick into Ivan’s hand and started thrusting into it, Ivan tightened his grasp as he started licking closed the wound on his newly claimed mate’s neck. He missed the sensation of having his fangs buried deep in Mick’s neck, and Mick’s protest when he’d extracted them told him his mate agreed with him. Still, he knew he’d soon enough be filling his mate up to his heart’s content.

Mick squirmed as Ivan let his tongue slide from the base of his neck and down to find a pale, brown nipple. When Ivan swirled his tongue around it and kept up a leisurely stroking of Mick’s cock, he mewled and desperately thrust against his mate.

Mick’s body was tormented with pleasure, and his moans filled the air, spurring Ivan on to no end. Mick protested when Ivan broke away from the rock-hard nub. When Ivan continued to let go of the cock he’d been holding, Mick groaned his distress but helped his lover as he began pulling off those pants, dragging his boxers down with them.

Ivan took a moment to truly appreciate his mate’s appearance. There was strength in that slender body, even with his pale, delicate skin. Still, what took his breath away was the desperate desire he saw in his mate’s eyes. Mick wanted him, and it made Ivan feel like he was on the top of the world.

His mate, his. Ivan almost shredded his own pair of jeans as he struggled to get them off. Finally naked, he was surprised when Mick reached up and forcibly pulled him down on top of him, nestling him between his outstretched thighs.

His mouth was attacked, Mick’s hungered instincts taking control. Ivan soared through the skies as they began a round of bump and grind. The feel of those throbbing erections sliding against each other had them both on edge. Ivan actually had to still Mick’s hips to get him to stop before he came.

For that, Mick bit Ivan’s tongue and his blood seeped into their heated kiss, the taste of which seemed to have Mick in a barely-controlled frenzy.

No longer able to wait, Ivan broke their kiss and reached into the bedside table to get the bottle of lavender-scented lubrication and lubed up two fingers. Taking Mick’s mouth again, he fucked his mouth with his tongue and let his fingers travel down to that hidden opening, rubbing at it gently before shoving both fingers in.

Ivan swallowed Mick’s scream at the forceful penetration, and he let his fingers still until Mick began rocking himself gently onto those fingers. Scissoring his fingers, he sought to stretch his mate for the coming act. There was little resistance to Mick’s body when he added a third finger, and Mick’s motions were more hurried now.

About to lose his mind, Ivan withdrew his fingers, and Mick groaned, about to protest when he saw Ivan slick up his thick eight inch cock. The groan turned to a moan, and Mick turned to lie on his stomach, but Ivan stopped him. “I want to see your face when I come inside of you.” 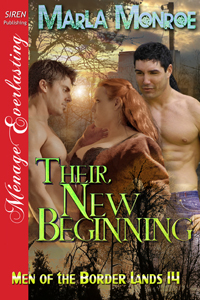