While on a trip to visit her grandmother, Daphne becomes too tired to drive and decides to pull off the road and take a nap. She’s woken up by two girls, neither of them quite human, and one who seems intent on killing her. She bolts out of there, but it seems the creatures aren’t done with her yet.

Anna, a paranormal hunter, arrives to help Daphne out, and a chance meeting becomes something much more when Anna comes to visit Daphne after taking care of the forest spirits that were angry with her. 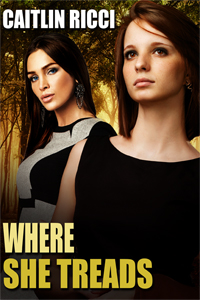 I drove along the dark highway, my old beat-up clunker of a car rumbling under me and guzzling gas as if it was a person dying of thirst somewhere in Death Valley. My car might have been a classic, if it had been better taken care of. As it was, the ‘67 Impala was barely functioning, but I couldn’t afford better right now, not if I wanted to be able to eat anything more than Ramen noodles for the next year. As it was I’d barely been able to scrape together the fifteen hundred needed to buy the thing a year ago, and keeping it together and running was draining me of every last cent I really had. I both needed the giant car and hated it at the same time.

The highway had been deserted for at least the last hour, which didn’t surprise me all that much since it was nearly two in the morning and, as I’d found, western Colorado highways were usually pretty quiet except for the occasional trucker. They got off and went south generally, from what I’d been able to tell. There were easier roads to travel through the mountains than the one I was on, but I didn’t have much of a choice if I wanted to get to my grandmother’s house in time for her birthday the next day. I had another four hours left to drive, and the safe little voice in my head said I should have stopped for the night back when I was near Black Hawk. The gambling town had seemed too bright and I’d been too awake to think of sleep so soon. I’d actually thought I would have seen a hotel or two since then, but anything even halfway resembling a hotel had looked abandoned and I hadn’t had the guts to stop in and see if my suspicions were correct.

My eyes started to feel heavy close to three and I blasted my air conditioning on the warm August night and turned up the music on the loudest and most obnoxious radio station I could find. Heavy metal music really wasn’t my thing, but I needed the noise, so I let it blare on, determined to stay awake and not crash on the side of the road. I could handle it, I’d be at my grandmother’s house and wrapped up in my childhood bed by early afternoon when she took a nap. She wasn’t expecting me, and I’d thought surprising her would be a great birthday present. Now I was starting to realize that I should have asked for another day off so that I could stretch this out over a few days and not try to rush things like I was.

I yawned and drummed my fingers over the steering wheel. The radio DJ informed me that I’d just finished listening to someone called Angry Harry and the Death Heads, who were a new band out of Chicago. I couldn’t have cared less, because it was all just a racket to me and it was no longer helping to keep me awake like I’d hoped. I’d stupidly finished off my last energy shot around midnight and I was sad to say that the effects of it had been wearing off almost immediately. I was struggling, and each passing mile with the curvy roads and steep mountain drop offs was not helping.

Twenty minutes later I pulled off the highway into an emergency pull over area and tried to ignore the little voice inside my mind that wanted to replay every scary movie I’d ever seen about when stupid people got off the highway and stopped for the night, only to be gutted and strung up on tree limbs around their cars. Okay, so my mind was exaggerating, but I knew it wasn’t too far off. And even if there weren’t crazy hitchhikers, I was still in danger of being attacked by wolves, mountain lions, bears...werewolves even, maybe. I shivered. I read werewolf books, but not the kind of romanticized ones that seemed to be so popular. The werewolves in my books were monsters, stuck somewhere between men and wolves and incapable of caring about anything but sating their own blood lust. I tried to relax as I got out of my car and stretched out over my backseat with my purse pushed up under my head as a makeshift and highly uncomfortable pillow.

I closed my eyes and tried to shut up the scared voice in my head and instead think of how much safer taking a nap here would be rather than driving off the side of the mountain and ending up in a crumpled pile of steel and glass at the bottom in a raging fireball. Okay, so that was another exaggeration based on a recent movie I’d watched. I really needed to get off the movies and focus more on reality.

Because, really, the only thing here that would keep me from getting at least a few hours of sleep would be my own mind keeping me awake and the awful non-pillow under my head. I closed my eyes and hoped for the best even as I started to sweat in the quickly heating car.

I must have fallen asleep, because when I opened my eyes again it was just after four. I groaned, realizing that the little nap had barely done anything for me and feeling awful. My neck hurt, I was too hot, and my mouth was really dry.

I wasn’t sure what had woken me up, since I figured it must have been something other than my own discomfort, so I looked around the forest behind my car. I kept my eyes big, hoping to catch any sort of movement out there that might have been a deer or a bird.

“Please be a squirrel,” I mumbled into the blackness. There was a moon, but it was behind the trees and not much use to me there as I looked around. When I saw nothing behind my car, I sighed in relief and turned back around. I was ready to try going back to sleep until I saw something in front of me that made me choke back a scream in fear of drawing their attention.

It was a girl, if she could be called that, since she was mostly covered with leaves and moss as far as I could tell. And at her side stood a hideous tangled web of vines and branches in the rough shape of what I might have thought was a wolf. She was standing still one moment, her green eyes staring straight at me, and in the span of one of my rampaging heartbeats she had leapt up onto the hood of my car and I fell back against the seat behind me as I screamed.

“You should not be here,” she hissed as she brought her hand up and pressed it against my windshield. The temperature in my car dropped from the sweltering summer heat I’d been suffocating under to almost chilly, and then it continued to plummet until I was shivering and ice crystals began forming around her fingertips on my windshield.

I heard this new voice like a police siren against my skull; all loud and commanding my attention to the point where I could not turn away once I’d moved my head to look at the woman at the window beside me.

“Go now! Run!” she screamed again, banging on my window with her tightly balled hands. The girl on the hood of my car slid off and, for a moment, I thought maybe there was a chance she would go away and just leave me alone. I may have even prayed for it, even though I’m not the praying kind of girl. Then she popped up again on the other side of me. She pulled her lips back from her teeth, exposing rows of sharp quills, and I moved as far away from her as I could, but that put my back against the other one and even though she looked normal, I wasn’t taking any chances with these freaks.

“Open the door,” the woman behind me called. “Come out. I’ll keep you safe. You’re not okay in there.”

The one across from me licked her lips. “Yes. Go to her. Come out of this steel box and I promise that I will show you mercy as I kill you.”

“Adele, no!” the girl behind me shouted as she banged on the window behind my head. “She is not for you to kill. She is for the king to decide what to do with.”

The one named Adele hunched her shoulders and growled at me. “And if he says that she is to die?”

“Then he will choose the method of her execution.” 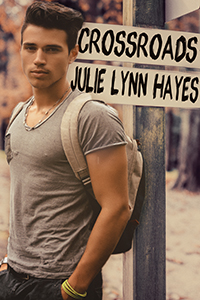 Half a Dose of Fury
Zenina Masters
In Shelf
$3.99

The Lawman, the Badass & the Songbird (MMM)
Lynn Stark
In Shelf
$4.99
Tweets by
sirenbookstrand