Where the Viscount Met His Match (MF)

Secrets. Lies. And a second chance at love...

Torn from the only man she'd ever loved by a tragic secret, Mara Miller has traveled a long and difficult road. From poverty and the workhouses, she's finally made a life for herself as the owner of a small haberdashery in London. With her companion, Big B, an African slave she'd helped escape from a Brazilian slaver, she's made a fresh start. But when the past walks into her shop—in the form of the ever-handsome Roarke Garrott, Viscount Eversleigh—Mara feels her whole world crash to her feet. Thrust back into a web of lies, deceit, and manipulation, Mara is forced to face the one man she'd sworn to forget.

For the past seven years, Roarke had sequestered himself in India to mourn Mara's death. Vowing to move on and put the past behind him, he returns to London, only to find himself gazing into those beautiful green eyes he believed he'd never see again. Now he's found her—alive and trying to deny who she was. A million feelings wash over him. Joy. Fury. Heartbreak. He would have the truth from her—of where she'd gone, and why—but when trouble from the past finds Mara and Big B, the truth becomes secondary to saving Mara's life. After just learning that the woman he'd loved is alive, Roarke is not about to lose her again... 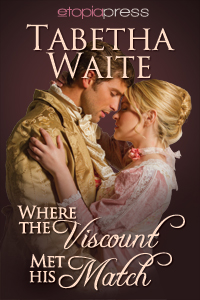 Where the Viscount Met His Match (MF)

More From Ways of Love

Where the Viscount Met His Match (MF)
Tabetha Waite
In Shelf
$4.99

When a Duke Pursues a Lady (MF)
Tabetha Waite
In Shelf
$4.99
All Books In Cart
All Books In Bookshelf
Tweets by
sirenbookstrand