Have you ever woken up every day afraid of everything? For single mom and widow Melody Carter, six months passed since an IED ripped her life apart. Everyone is sympathetic and offers platitudes of comfort and support. Everyone thinks they know why she’s grieving, but Melody isn’t mourning her broken heart. She’s ashamed to be grateful her abusive husband won’t hurt her anymore and scared for her child. Born with a mild heart defect, her daughter needs lifesaving surgery and with her funds tight and her emotional scars tighter, she’s running out of options. When she receives an offer for assistance from Mike’s Place, can Melody put her faith in the men her husband called friend? Have you ever woken up, day after day, to discover your body’s betrayal? Marine Captain, Joe Anderson Cooper, received the Silver Star for Valor when he led his unit through heavy fire to rescue fellow Marines. Despite numerous injuries, the Captain refused medical aid, insisting that the medics attend others. A broken back and shattered bones put Captain Cooper in a wheelchair and every day is a battle to keep his recovery on track and his sanity intact. When a single mom moves in to the apartment next door to his and he recognizes kindred—damaged—soul, can he overcome her fear and be the man she’s always needed? Can these two lonely souls rise to the challenge or will their scars trap them forever? 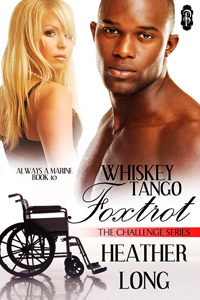 Heat Rating: Sizzling
Word Count: 25,000
2 Ratings (4.0)
Contemporary Interracial Romantic Suspense
In Bookshelf
In Cart
In Wish List
Available formats
ePub
HTML
Mobi
PDF
Reviews
I liked this story, I wish it were longer. i would have enjoyed a little more depth in the characters, which is hard to do when its a short story.
CheriBlue
Read more...
Excerpt

“Hard to be far from home.” He lifted his hand as though about to pat her arm. Her heart froze in her chest and she held her breath. The captain hesitated and tapped the chair instead. She let out the breath slowly.

“Yes.” Tremors shook her and it took effort to keep a calm expression. “I’m used to it, I’m afraid.”

“Me, too.” Of course he was. The dog tags, the Marine green, the tight cropped black hair dusting his rich brown head. The wheelchair and cast didn’t disguise the Marine in the man sitting next to her. She stole a glance at his left hand. No ring.

Frowning at her thoughts, she stared at the parking lot, relieved—and a little disappointed—when she caught sight of the white shuttle.

“Saved by our ride.” His gentle humor eased the bundle of nerves knotting in her belly.

She still had to survive the ride to the medical center and fumbled for more words, but her tongue seemed to be stuck in neutral mode.

The van rolled up and the driver, a big man, hopped out. He gave Joe a quick handshake. She retreated back a step, keeping her distance. “Good morning, Captain Anderson, Mrs. Carter….”

She barely heard the rest of the words. Plastering a polite smile to her lips took every ounce of her energy. She waited while the driver set her bag inside and loaded Joe’s wheelchair with a hoist. Only after the two men were near the back of the van did she ease inside, choosing to sit in the third row closer to Joe’s wheel chair rather than the row right behind the driver.

Breathe…. Repeating the mantra helped, and thankfully Libby slept through the whole ordeal.

“He’s a friendly,” Joe murmured when the van door closed. The driver was still outside.

“I know.” Her emotions screeched, denying the words. It didn’t matter. It was a ten-minute ride to the center. She could handle it. I survived eight years with Tuck; I can survive ten minutes with strangers.

He’s a friendly. They’re both friendlies. No one is going to hit us…. 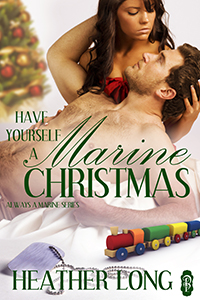 Have Yourself a Marine Christmas (Always a Marine)
Heather Long
In Shelf
$2.99