On All Hallows Eve, uptight Lianne Perry finds herself drawn to the bright lights of Club Hypnotic. All she wants is a simple drink; what she gets is so much more.

Ravenna Blake, owner of Club Hypnotic, effortlessly begins to work her charms on Lianne the moment they meet. With Ravenna’s cocky personality, mesmerizing good looks, and audacious behavior, how can Lianne possibly resist?

But the mysterious Ravenna isn’t what she seems, as Lianne soon comes to learn. Ravenna has her secrets, but Lianne is concealing some of her own. As the night wears on, Lianne isn’t sure what she wants, or even what she believes. Is it possible for these two strangers to make a little magic of their own? 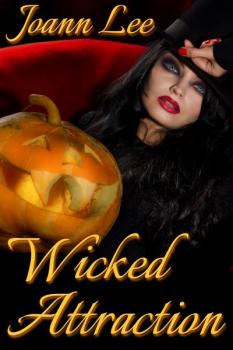 “Let’s get out of here.” Ravenna tugged Lianne’s hand, forcing her to stand on wobbly legs.

Everyone in the bar stopped dancing, parting directly in the center when the two women wove their way across the dance floor. Ravenna’s hand slid to the center of Lianne’s back. She possessively lowered her palm, clutching Lianne’s rounded backside with a grin. Lianne stiffened when the tips of Ravenna’s fingernails squeezed the tender flesh through her dress. The fear in her eyes must have been evident, prompting Ravenna to whisper in her ear. “Don’t worry, baby. They’re all just jealous because you’re the one with me.” Ravenna stopped directly in the center of the crowd, tugging Lianne firmly against her with a grin.

Lianne whimpered as Ravenna’s fingertips touched her cheek, gliding slowly over her heated flesh. “Tonight, you’re all mine. All mine,” she repeated to emphasis the point. Lianne’s knees buckled from beneath her when Ravenna yanked her forward with such force that she nearly lost her balance. Chilly lips lingered against the curve of Lianne’s neck as Ravenna’s snakelike tongue flicked across the flesh. “Come,” she commanded with a quick nip to Lianne’s ear. “I know the perfect spot where we can ...” She pulled back, meeting Lianne’s eyes with an unnerving smile. “Get to know one another a bit more.” Her voice filled with mischief. “Somewhere ...” Her tongue effortlessly flicked the curve of Lianne’s ear. “... secluded.”

Lianne opened her mouth to speak, but no words would surface. For the first time, both fear and excitement collided within her veins. Whether it was a good thing, or a bad one, she wasn’t sure, but Ravenna was unlike any woman she’d ever met. Lianne couldn’t think coherently as she submissively followed Ravenna into the parking lot. She gulped when Ravenna opened the passenger side door of a shiny black convertible. Ravenna’s hungry eyes lingered over Lianne, causing her to tremble with anticipation when she lowered her body into the bucket seat.

“Don’t worry,” Ravenna purred. She leaned forward, slipping her hand between Lianne’s thighs with a low groan. “I won’t bite.” She slammed the door to a close, appearing moments later behind the wheel with a grin. “At least,” she added with a ravenous glance towards Lianne. “I won’t bite too hard.” A mysterious twinkle danced within the sea of emerald, while a seductive smile tugged at the corners of her lips.

Lianne shivered, gulping as she stared at Ravenna. Now what have I gotten myself into?