All families have secrets, but what Avery doesn’t know might try to kill her.

The day Avery Belmont was born, her father disappeared. Shortly after, her mother stole her away to Detroit, far away from the secrets buried deep in Shady Creek. But when her estranged grandmother dies, Avery is forced to return and face the rumors that she’s a witch, making her wish she’d never come back—until Drew Montgomery gives her a reason to stay.

Drew knows things no one else knows. Things about Avery, about her family’s past, and about what really happened to her father. However, the price for information may be too high as getting close to the striking, yet caustic Drew starts to have deadly consequences, and living with the lies may be safer than uncovering the truth. 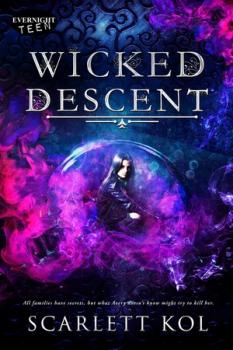 “Then prove it. Try again. Really try.”
“No. I’m tired Drew, and I want to go home.”
“Do it,” he yelled.
“No.”
He opened his mouth as if to argue, but slammed it shut. Then he marched over and grabbed my hand with a firm, stinging grip and dragged me toward the trees, huffing and puffing until steam circled his head. “Let me show you something.”
I stared back as the view of town vanished under the treetops, lifeless wooden limbs stretching out above me and covering us from sight. Darker. Secluded. No one around to hear me scream. The last time Drew showed me something, I ended up trapped in a pile of mangled metal and shattered glass. My queasy stomach told me to leave, but he promised he’d never try to hurt me again.
If only I trusted his promises.
“Stand right here.” He stopped under a particularly ominous willow tree and clamped his hands on my shoulders, his thumbs at the base of my neck. I squirmed, but he held tight, his fingertips digging through my layers of sweaters, positioning me into some unseen perfect spot.
Moonlight filtered through the trees, casting inky shadows across his face, his lips a hard line. “Don’t move.”
I shrank my neck into my sweater. He stomped in front of me and scooped up a handful of snow as I shifted my weight to my toes, ready to run. He packed the snow between his palms, his eyes fluttering closed. He grimaced as he pressed his hands together until his knuckles turned white against his cold-reddened fingers. “Now watch.”
He fanned his hands open. Resting in the center was a flower. A peony or gardenia, or some other flower with delicate tiny petals, each one glistening in the moonlight as if it were made of tiny glass shards.
“Is that ice?” I reached out to touch it but stopped, lifting my eyes to meet his.
He nodded. “Take it.”
I cupped my hands and he gently passed the flower to me. A chill ran across my skin as it landed on my palm. It really was made of ice. Amazing. Drew created this perfect, beautiful thing out of ice—just for me. I studied it closer. The petals looked white, but they were clear, as though my finger would float right through if I tried to touch them. The ghost of a flower that never existed.
“Blow on it.” A crooked smile twisted Drew’s face. “Like a birthday candle.”
“Seriously?” I lowered my chin to my hands and softly exhaled. The flower exploded into a cloud of snowflakes. They whirled around my head, faster and heavier, making it impossible to see. My heart pounded as the cloud shrank around me. Closer. Tighter. Then it shot into the air, spun high above my head, and disappeared.
“What was that?” I looked up at the sky.
Drew stared past me and pointed up. I turned around. The branches of the tree behind me were covered in thick hoarfrost. No, not frost—the fluffy heads of ice flowers. Each branch hung heavy with them as if in full bloom. Moonlight reflected off hundreds of petals casting a brilliant glow around the tree. It was sunshine and summertime, all in the middle of the night. For the first time since I arrived in this town, I almost felt warm.
“It’s incredible,” I whispered. “It’s like nothing I’ve ever seen before. It’s like—”
“Magic,” Drew said with a grin I could hear in his voice. “Now, what do you say about giving the water thing another try?”