Amy and Kevin have only ever had sex with each other. During a PTA meeting to stop the building of a strip club in their town, they exchange naughty texts, arousing each other in public. When they get home, they shed their clothes at the door and barely make it to the bedroom. While Kevin pleasures her, he asks her what she fantasizes about. Her reluctant answer shocks and thrills him: sex with a woman. His fantasy is just as outrageous: watching Amy with another man.

When they camp during a summer heatwave, Amy and Kevin wade into the cold creek, and Kevin steals Amy’s bikini top. Before she can cover herself, they meet another couple—seasoned swingers who are eager to play with them. Amy denies what she really wants, but the next time they meet, seeking shelter from a cold rainstorm, the other couple invites them into their luxury RV. After some wine to relax the inhibitions, their new friends open Amy and Kevin to all kinds of new pleasures and make their wicked hot ménage fantasies come true. 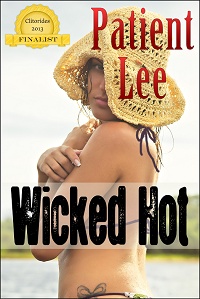 “Oh, my. This is beautiful.” The natural beauty of the campground awed Amy. Their site had a gorgeous view of the creek which ran the length of the park. “It says that you can go tubing on the creek when the water is high enough,” she said, pointing to the brochure. She looked down the creek toward the tent area, and saw people swimming in a deeper section of the water. “Hey, honey. Do you wanna swim in the creek later?”
“Let’s set up before we get carried away here. Hand me that chock, would you?” Together they set up the canopy, stacked the firewood, and plugged in the party lights on the awning. Amy prepared the baked potatoes and the salad, and Kevin got the grill ready to cook the steaks. “Bring out the bottle opener!” he said through the screen door.
“Grab me a beer too,” Amy said, handing the opener out of the door.
“Um, it’s more important that I get my beer. You’ll have to wait,” he said with a teasing edge to his voice. “You know I can’t cook on the grill without a beer. Remember the shish kabobs of 2011?”
“Oh, yes. That was ugly. Half-burnt, half-raw. You were lucky no one got sick. What kind did you buy anyway?”
“New York strip, like always.”
“Not the steaks. What kind of beer?” She rolled her eyes.
“Here. See for yourself.” He handed the ice-cold Harpoon IPA through the door.
“Ooh. You do love me.”
~~~~~
After dinner, they walked hand-in-hand around the campground, checking it out. “Wow. There are a lot of people here from out-of-state,” Amy said when they reached the section marked “Monthly Rentals.”
“Yeah. I was talking to the campground owner. I guess workers come here from all over the country to work on the Marcellus shale wells. Some drill the wells, some work on the pipeline. He said there’s going to be work here for these guys for the next twenty years.”
“I feel like I’m in the Twilight Zone,” Amy said. “I’ve never seen so many different license plates—Texas, Oklahoma, Tennessee, Arkansas, Colorado, Mississippi ...”
A large welding truck eased by them on the narrow dirt road. “Those must be why the road is so damned bumpy,” Kevin said. He looked down the row of campers. “These fifth-wheels don’t have camping stuff. It’s weird. Where are the party lights, the bikes, the screen houses … ?”
“The sites are pretty stark,” Amy said, nodding. “I wonder what all these workers think of the weekend people. I wonder if they like the company, or if it annoys them.”
“Watch your step,” Kevin said, as a huge, white pick-up truck crept down the bumpy road. The diesel engine announced the truck’s presence from a mile away. At the top of the windshield, there were large white letters. “Nothin’ finer than a pipeliner!” The couple in the truck waved on their way to their own camper.
Kevin and Amy arrived back at their own site, sat in the chairs overlooking the creek, and popped another round of IPAs. “Should I make a fire?” Kevin asked.
“Nah. It’s too hot,” Amy replied. “I think I’m going to take my beer inside to cool down.”
“You wanna fool around?” Kevin asked with hope in his voice.
She shook her head. “It is so hot, I can’t imagine you touching me. Let’s call it an early night. We have to be up early tomorrow, and it’s just so fucking hot.”
“O-K.” He hung his head, disappointed. “But tomorrow night, you’re mine.”
“It’s a date,” Amy replied, as they went back into the camper for the night.