Freelance writer Cheryl Witte loves her romance novels as much as the next girl. Especially Dangerous Knights, the story of two dominant, sexy shapeshifters, Cy and Maksim. To be possessed by two dark and dangerous Masters? One word: yum! But that’s just fantasy. It could never happen in real life… right? She wouldn’t want it to.

Then again, maybe it could… and maybe she would.

Cheryl is onto the story of the century, about a portal that allows real men -- dangerous and barbaric ones -- to travel into the human world and kidnap unsuspecting women. You bet she’s willing to take her chances for that kind of story. A paper cut and a few muttered words could make all her wishes come true, including a cover story in the NY Times. Not to mention bring the men of her fantasies to life.

She sets up some cameras, arms herself with a tranquilizer, and waits. And waits…until…one minute she’s sleeping, the next she’s dragged into a world of her imagination, to face her darkest desires… and most shocking secrets.

Cy and Maksim have their own challenges to face. But nothing can stop them from introducing their fiery new bride to the rapture of complete submission. 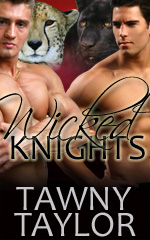 "I'm confused," she confessed. She tried to back away from him, to get a little space, air, whatever. But the back of her legs smacked into the cot and down she went again, on her butt.

"I'm not." Cy bent over her, plucked a piece of her flyaway hair up, holding it between his thumb and forefinger. "Your hair. It's the most unusual shade."

"It's called dishpan blonde," she responded dryly. "And you probably have never seen it because it's so ugly and blah that most women with the color have their hair bleached or dyed."

"I don't think it's blah at all. It's beautiful. Just like the rest of you."

God, was that the most freaking romantic thing she'd ever heard in her life, or what?

She felt herself going soft for a brief moment then reminded herself about the fact that she could not afford to get emotionally involved in this situation. She had a career to return to, a home, a life. None of this bride stuff had been in her master plan.

She shook away the lingering warmth gathering on her cheeks and shifted to the side. The lock of hair he'd been holding slipped from his fingers and landed on her shoulder.

It felt hot, like she'd just had it wrapped around a curling iron. Weird.

Before she could speak again, Cy was pointing at her chest, demanding, "Take off your clothes."

Maks chuckled. "I told you she was going to be --"
"Do. It. Now." Each word was a menacing threat, tempered only slightly by the glimmer of something softer in his eyes.

Push her luck? Or play it safe, and bide her time?

Oh ack! She shouldn't have to make these kinds of choices!

If only she hadn't fallen asleep, waiting for these guys to show up last night. If she'd been more alert and awake, they wouldn't have stood a chance. They'd be lying unconscious on her bedroom floor, and she'd have her proof that the Twelfth Knight Brotherhood was for real, and she'd be on her way to a huge career in investigative reporting.

Cy's eyes narrowed, losing the touch of warmth they'd had earlier. Maybe he wasn't as much of a softie as she'd thought.