Murder walks the High Street of a small East Anglian market town and bodies keep popping up everywhere. The cemetery of the parish church is vandalized and all the threads lead to two families still locked in an ages old feud. The vicar has gone a bit barmy and the custodian of the church is certainly hiding something. Indeed, he seems to take great pleasure in misleading the members of the police, most of whom are from ‘outside’. DC Sarah Kemp wonders how she is ever to solve the mystery when everyone speaks in riddles and half-truths. Her budding relationship with her co-worker, DI Dane Pudney, is frustrated at every turn by developments in the case. Developments that make her a target of the killer. As news of the mayhem spreads, the small town is overrun by the press who get in the way and meddle in the investigation. The mystery man found hanging from Joe Rainbird’s oak tree isn’t really a stranger at all. It seems his ancestral roots run deep into the marshy East Anglian fens. But how can that possibly be, Sarah and Dane ask themselves. Join them as they sift through the clues and possible leads to the identity of the murders all the while enjoying a look into the inner workings of the social makeup of a small town with a history that stretches back into antiquity.

Mike Thomas has woven a rich tapestry of mystery against the cozy confines of a small market town where everyone knows everyone else, and those whose ancestors are not buried in the graveyard will never be admitted into the inner circle. 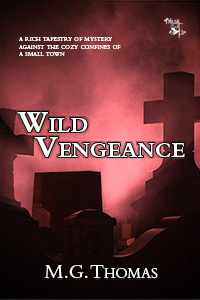 She turned away from the door, waving something under his nose and pleading with him to say something to console her. He has no idea what caused her panic.

“Yes, a bunch of poison for me. Sulphuric acid one night, black bryony the next. And tomorrow?” Her voice cracked with the strain as she tried to brush away her mounting hysteria.

“Quick. Do you recognise the cars parked here? Is any one of them different?”

“Only the Peugeot, but that's a visitor. No, there's nothing out of the ordinary...except that.” She spat the word out.

“Just wait a minute. I'll go round the back and check the house.”

The smashed window was repaired, and there was no sign of any attempted break-in or damage. Just the plant tied to the door knocker.

“Sarah, would you like to come back with me?”

“Yes, at any other time, yes. But if I don't stay here tonight, I don't think I'll ever feel safe enough to come back here again. It's like falling off a bike...you've got to get back on again straightaway. And I've got to go inside at once.” She passed the plant to him and he stared at the bundle of small greenish flowers and the eye-catching red berries.

She opened the two security locks and switched on the light. Then stepped back on Pudney's toes, recoiling from something lying on the doormat.

“Look at that!” She retched.

He gently pulled her away from whatever it was that sickened her.

“Stay there a moment. Don't move.” He leant her against the wall for support and went to look for himself. His mouth twisted in disgust and he swore violently and rushed to open the boot of his car. With the approach of winter he was prepared for bad weather and carried a small spade and sacks.

He stared down at the present left for Sarah and swore again. A squashed rat had obviously been posted through the letterbox as a kind of warning, he supposed. But to warn Sarah to...to what? What could she possibly have done, other than rescue a dog hanging from a gravestone, find an old lady viciously murdered and take a distressed visitor to the police station? Nothing. She was doing her job and doing it well. Perhaps that was the reason.

He shovelled the rat into the sack and left the spade inside, tied it roughly and called in for someone to collect the evidence.

He must have sounded disturbed and forceful because within minutes a car arrived and a young constable leapt out to take away the unsavoury gift. He passed on the news that the car, which roared away when Sarah and Bidwell were in the churchyard, had not been spotted, followed or found.

Sarah listened to the short conversation leaning uncomfortably against the wall and watched the sack with its grisly contents being transferred to the police car.

Two nights running, she thought, some sicko attacked her property, privacy and, in effect, her person. She was frightened, anybody would be, but more angry than afraid of the warning. And what would happen next? Things like this always seemed to happen in threes. Two down, one to go. One what? Another incident or another person—her?