When Jessie Green came to Wilde, Nevada, she never imagined she would find a home and five gorgeous men to love. She knows what she wants, a life with the Wilde brothers, but outside forces are bent on stopping her. Just as she's ready to accept their proposal, she's kidnapped and her nightmare begins.

The Wilde brothers are terrified when they discover Jessie is gone. They must put together the clues and uncover the psychopath before he delivers his dark vengeance on the only woman they will ever love.

It's a race against time. If they can't save her, Wilde, Nevada will become her tomb.

NOTE! You are purchasing Siren's newest serialized imprint, the LoveXtreme Forever Series. This is the conclusion of the The Brothers of Wilde, Nevada collection. These books are not stand alone. Each is a continuation of the previous book and must be read in the numbered order. The final book contains a happily forever after for the heroine and all her men. 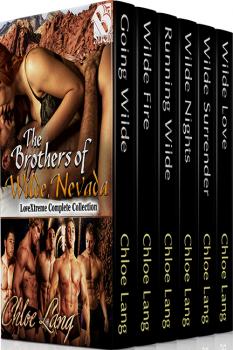 Jessie didn’t give a damn that she was only wearing Denver’s shirt as she walked with him into the hospital. The only thing she could think of was that she needed to see Austin.

Daniel, one of the Wilde brothers’ dads, was waiting for them by the door. “Hi, son. Hi, Jessie.”

Daniel grabbed her hand and squeezed. “I’ll take you to him, kiddo, but shouldn’t the doctor take a look at you first?”

“The paramedics already did. I’m fine.”

“See what I have to put up with, Dad.” Denver shook his head. “The EMTs said your vitals looked good, but you still needed to be seen by the doctor.”

“That can wait until I see Austin.”

Jessie had been drawn to the woman the very first night she’d come to Wilde and checked into the Hotel Cactus—which Maude actually owned. To Jessie’s five cowboys, the woman was Aunt Maude.

“But she needs to see the doc,” Denver argued.

“She will. One minute to peek in on Austin will calm her mind and may be better medicine than any sawbones could give her.” The old gal knew how to keep him and his brothers on their toes.

“Son, let Maude take her to him.” Daniel Wilde’s tone was comforting. “You and I can go find the doctor.”

“Listen to your dad, nephew.”

Denver shook his head in defeat. “One minute. That’s it.”

“Then you will see the doctor and do whatever he says you need to do.”

Maude held out her hand. “You look pretty good for what you’ve been through. You’re really okay?”

Jessie nodded and took her hand. They headed down the hallway.

“I took the liberty of going in your room at the hotel and getting you some clothes. They’re in Austin’s room. I thought you could change in there.”

“So are you, honey. Awesome even.”

They passed the nurses’ station, and Maude pointed to the door of room four. “He’s in there, Jessie. His mom is with him. She’s expecting you.”

“Thank you so much.”

“Go. I’ll try to hold off the cowboys, but I can only do that for so long.”

Jessie grinned and quietly opened the door to Austin’s room. She saw him first. Her hands shot up to her mouth. The IV in his arm, his eyes closed, and the hospital room stunned her. He was a rock. He wasn’t supposed to be here.

She closed her eyes and fought back the tears. She felt an arm wrap around her.

She hugged the mother of her five cowboys. “I’m so sorry.”

“Whatever for? You didn’t do anything to cause this.”

“Rich wanted me, not Austin.”

“True. But that doesn’t change anything, dear. Now, let me take a good look at you. Considering what you’ve been through, no wonder you look so shook up. You okay?”

Jessie nodded. “Has Austin come to at all?”

“No. Shouldn’t be long now. He’s going to have a lot of guilt, Jessie, when he does.”

“Why?” Jessie was the one who brought the trouble to Austin. He had no reason to feel guilty.

“He didn’t protect you. Sure, he didn’t have a chance, but that isn’t how the Wilde men look at things. They have to be perfect when it comes to their women.” Jessie could see the pride on her face as she spoke of her sons.

“I am.” Jessie couldn’t help but smile as she thought of her men. “But I don’t know if that’s enough.”

“Trust me. It will be. Austin is all thorns and steel on the outside, but on the inside—”

“He’s wonderful. It’s just…that…” Jessie wanted to tell Mrs. Wilde about Austin’s demand for her to choose between him and his brothers, but hesitated.

“Something’s wrong? You’re torn up about more than the kidnapping and Austin being here, aren’t you?”

“Sweetheart, we’re going to be family. I always wanted a daughter, and now I’m going to have one. I’m here for you.”

Jessie trusted this woman more than any other. “He’s asked me to choose.”

Mrs. Wilde looked to Austin, and then turned back to Jessie. “I’m not surprised.”

“Actually, I’m thrilled. You’ve got him.” A big smile lit her face.

Jessie prayed she was right. “I’m not so sure.”

“Don’t give up on him, honey. I’d almost lost hope for my boy, and then you came to town. You can do it.”

“Good enough. Now, let me leave you alone with him.” Mrs. Wilde kissed her cheek. “I hung your clothes on the hooks in the bathroom.”

Mrs. Wilde shut the door, and Jessie walked up to the side of the bed. Austin was completely out, but breathing easily. She touched his cheek and felt a single tear run down her face. “Master, I’m so sorry. Please be okay.”

Jessie leaned down and kissed him. He didn’t wake up as she’d hoped he might.

She looked up at the clock on the wall that reminded her of Denver’s obsession with time. Even with the invincible Maude working to keep Denver away, Jessie knew he’d be busting through Austin’s hospital room door at any moment. She rushed to the bathroom to dress. When finished, she sighed. It felt good to be in clothes again.

Jessie left the bathroom and looked once again at Austin, asleep on the bed.

“How in the world am I going to get through to you, Mr. Wilde?”

Jessie leaned back on the sofa as Jackson and Phoenix stripped her of her clothes. She didn’t even try to move her eyes from Austin’s. His gaze was fixed on her, demanding her focus. This was all for him.

Out of the corner of her eye she saw Dallas and Denver undressing. Though tempted to turn to them, she didn’t. She wanted to see Austin and try to figure out what he was thinking, feeling, experiencing. Could this sex display work to turn him on and then turn him around? She prayed it would.

Phoenix touched her chin. “You get more and more beautiful every day, angel.”

“You say that all the time, cowboy.”

“And I mean every word.” He leaned in and pressed his mouth to hers. A spark shot from where he kissed her all the way down to her toes. She felt the heat in her face as he stroked her hair. She lifted her hand to his chin. The roughness she found there felt wonderful and so very masculine.

“Oh boy, I will.” Jackson did something that surprised her. He crawled over her, placing his legs on either side of her hips. The move had the feel of domination to her, and she liked it very much. Could Jackson ever take on a Dom role? Someday? Maybe. Right now, she liked him just the way he was, fun and full of life.

His lips came down on hers with a fervor she liked. When his tongue shot into her mouth, she felt her pussy get wet. One of his hands went to the back of her neck, pulling her closer still. The other glided down her side until it finally cupped her hip. She moaned into his mouth and felt sensations of every flavor and type explode inside her.

Let’s give your big brother a show, boys!

She wasn’t sure the four cowboys could hear her thoughts, but they sure seemed like they could as they took turns on the couch with her. When she looked back at Austin, he seemed a bit moved, but only a bit.

Jackson suddenly left the couch and leaned over his jeans. She watched him rifle through his pockets, bringing out their contents. “I’ve got two condoms and a packet of lube.”

“Perfect.” Denver nodded. “Give me one of the condoms, you take the other.”

“You bet Jessie’s sweet ass I will. I brought them.”

She looked up at the man who’d demanded one of Jackson’s condoms. “Sir, can we show Master what we do?”

“That is definitely part of the plan, sub,” he answered with a wink. “Everyone agree?”

Jackson, Phoenix, and Dallas nodded. They were going full tilt. Austin had to come around tonight. There wouldn’t be any more chances. They had to succeed.

Denver sat down in one of the chairs. “Come here, sub.”

She obeyed, knowing Austin had the best view of what was to come. That thrilled her. Being with Sir again did, too. For the first time, all five of her men were in one room alone, and no one was making threats or about to throw punches. Instead, four of them were pleasuring her and one was watching. It would be better if all five were pleasuring her, but this was a pretty close second best.

She made sure to face the door when she did, so that her ass was as close to Austin as it could be.

She expected to be spanked, but instead Sir’s hand came up between her legs and over her pussy. His fingers probed, threaded, and pressed her swollen folds, calling up the moisture from her channel.

Wicked warmth grew inside her as she thought of her cowboys touching and filling every inch of her body. She craved the pleasure they would certainly give her.

“What a nice wet pussy you have for us, sub. That’s good.”

“But you called me by name earlier. That earned you some whacks to this pretty little ass.” Sir rubbed her backside, letting her know with touch what was about to happen. “Do you think you deserve that?”

Her body started to vibrate, anticipating the spanking from Sir. “I do. I was bad.”

Denver leaned down and bit her ear. Then he whispered, “I know your safe word. It hasn’t changed?”

She wondered if he thought Austin might’ve had her change it, but he hadn’t. “Yes. It’s the same one, Sir.”

“Good. Remember, don’t come unless I give you permission.”

“That’s enough spanking, for now.” Lifting her up into his arms, Sir left his chair. “Come on, guys, let’s take this amazing woman on a ride she won’t forget.”

Sir placed her on the couch, and soon the four cowboys were taking turns with her. Her pussy grew wetter as fingers stroked inside her over and over. Other fingers tweaked her nipples, massaged her feet, and so much more. She looked over at her other cowboy. He didn’t even blink, watching with a ferocity that reached into her all the way to her pussy. Soon, she was panting and arching her back off the sofa.