Wings of a Butterfly (1Night Stand)

An escape to another place and time with better plumbing and brasserie? Away from a dominance contest one helped start? Sounds like a bloody good idea. Elizabeth Wentworth certainly thinks so when she goes on holiday to twenty-first century Madrid—in fact, it’s that very sort of thinking that leads her to sign up for 1NightStand’s matchmaking services. One night of pleasure, with no thought of duty, heartbreak or Pack law, just a pander to her desires. But falling in love? Not an option. Damien Chassange, carefree, unconventional, and Packless, is the perfect partner in her foray to self-indulgence. If only he wasn’t her mate.... 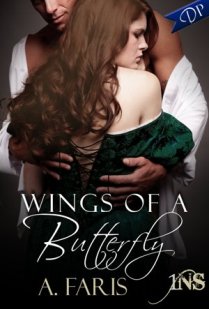 Wings of a Butterfly (1Night Stand)

“I don't suppose you'd be willing to change your flight?” He busied himself with extracting his shoes from under the table. Elizabeth wondered if he had bent over to avoid her gaze. He sounded unconcerned, but she thought she detected a tension in his shoulders.

You are fooling yourself again.

A man like Damien, with his love for an unencumbered life, would not care for permanence. Willing as he was to heed the mating instinct, Elizabeth suspected he was looking for an interesting partner in bed, rather than a mate for life. It should not matter to him if she left on the morrow.

“I cannot change it.” Her family would be held accountable if she did not present herself at the portal at the assigned time.

He looked up, a lock of hair falling over his eye, and gave her a careless smile. Having shoved his feet into his shoes, he stood in a smooth motion.

“I had a really good time.” He kissed her cheek. “And who knows, maybe we will meet again.”

His clear gray eyes held friendliness, nothing more. There was no hidden meaning to his sincere words. He had meant precisely what he said. A fond farewell, for a possible mate with whom he did —they did—spend a wonderful evening.

At least he did not pretend otherwise.

No declarations of love, furtive embraces that advertised indiscretion despite convincing attempts at concealment. Damien lived in the present, and laid his philosophy in life bare. No pretensions, nor false promises. And for all his blitheness, she trusted him not to hurt her. He had no ambition, nor the cruelty necessary to achieve it.

She caught his wrist, and tugged him down. His eyes widened in startlement, but he did not resist. He let her pull him close, bracing himself on his forearms.

“Something to remember you by, Lisbeth? I do not need any—”

She put a finger over his mouth. “Be quiet.” For some blessed reason, he acceded to her demand. They kept a watchful gaze on the other for a tense minute while she reconsidered her impulse.

Did she want to spend one night with Damien only to leave him in the morn? Would it be enough to fill the emptiness of her heart?

It would have to be.

Sex Me Up
Tianna Xander, Bonnie Rose Leigh
In Shelf
$4.99
Tweets by
sirenbookstrand