The job was to pick up and deliver an RV trailer up the East Coast, but there was a catch. Coming along for the ride home was Courtney Habberman—the most revered goddess ever to walk the halls of Holchester High School. It was ten years later, but she still turned me into a babbling pile of protein.

That all changed when we got stuck in Foggy Bend—a place that put us on an even level. A few days of immersion in a culture so dissimilar to our own brought out profound changes in us both. We learned what we could become if we put our faith in one another, but first, we had to learn that faith requires compromise. 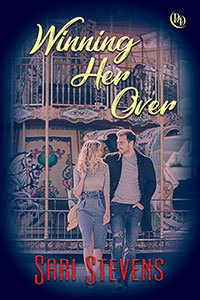 I sat next to my lawyer in a little room off the side of Courtroom 4C, trying to ignore the sneers from across the table. Annie, my soon-to-be ex-wife, was being the most pleasant I had seen her in months. It was her attorney, Sarah Habberman-Roselle, who was acting malevolently.

Shoving a paper across the table to my so-called counsel, Clive Buckner, she flashed a phony smile. “It’s the best deal we’re going to offer. Otherwise, we’ll let the judge decide.”

Fidgeting with his tie, Clive grasped the document in his pudgy fingers and leaned back in his chair. His plump neck enveloped his chin as he rested the agreement on his belly and gave it a quick look over. With a grunt, he sat up straight and set it before me. “This looks pretty good, Sari. You knew you were going to have to vacate the house. This lets you keep your truck and the wood shop with all the machinery and tools. You really don’t need the hauling trailer, do you?”

“How the hell do you think I get wood to the shop? Besides, Annie can’t drive a twenty-four-foot trailer with a fifth-wheel hitch. She wants it for her boyfriend. The damn thing is registered to Steven’s Hauling. It’s painted down both sides.”

“It has monetary value,” Sarah sniped. “It can be painted over and sold.”

“It’s my best source of income! I use it for all kinds of jobs. How am I supposed to make money to pay off all this other crap you’re throwing at me?”

“You store it in the back yard of the home you’re surrendering to my client.”

“My shop is right next door. I can keep it along the fence beside the building.”

Clive cleared his throat and gave Sarah a star-struck gaze. “Could we, please?”

She looked at Annie for a nod, then rolled her eyes and snatched the paper. “Another thousand, non-negotiable.”

“Hang on,” I complained as she scribbled in the margin. “I wanna keep my four-wheeler, too.”

Without looking at me, Sarah clicked her classy pen closed. “Not acceptable. Let’s put this to bed.”

“Find it a cheap motel. Annie knows a few.”

Twenty minutes later I stepped into the late May sunshine a free man—albeit one saddled with debt.

I didn’t go to the city much, so crossing at the lights in front of the courthouse proved a bit challenging. I almost didn’t hear my ringtone over the car horns and hollering. Better sense should have told me not to answer once I saw who was calling, but my better sense got left in a little room next to Courtroom 4C. Besides, I was feeling obnoxious.

“Jake Roselle,” I answered. “Your wife was the second prettiest girl in high school. Too bad she grew a dick.”

“Chrissake, Sari, what’d you think lawyers do? Sarah was acting in the best interest of—”

“She enjoyed it, Jake. She curled her upper lip each time she looked at me.”

“You torched her car and burned down her father’s business. I can’t blame her for being pissed.”

“It was ten years ago! The judge, the social worker…they realized it was an accident, but not the Habbermans. You, my one-time best friend, married into the meanest, most unforgiving bunch of vipers this side of—”

“You have a scheme. It’s always a scheme. Hell, you knocked Sarah up by running a scam on her. She only dated jocks a grade up.”

“Listen, bro. Sarah’s old man just found out he has a heart condition.”

“You’re lyin’ already. He doesn’t have a heart.”

“Just listen. They’ve got this awesome RV trailer. It’s the biggest damn thing you ever saw. The sides pop out and everything. They can’t use it anymore. Sarah talked them into giving it to us.”

“Look, it’s at their place in Florida, and I don’t have a fifth-wheel mount.”

“That’s because you don’t have a truck to put one on.”

“I’m getting one as soon as, you know…when Annie pays up.”

“Bite me, Jake! You’re using money your wife pried from my wallet, you snake.”

“And here’s your chance to get some of it back. I’ll give you a thousand bucks just to pick the trailer up and bring it back to Massachusetts. It’s easy money. I’ll even pay for your gas and meals along the way.”

“There’s always a catch, Jake,” I accused. “Like that time you wanted your fence fixed because your neighbor got a rescue dog.”

“Not this time. Not really.”

“Aha! You figured out Annie isn’t gonna pay up, so you’re gonna snatch my hauling trailer for collateral while I’m gone. I knew Sarah was after it.”

“It’s on the up and up. You go down and…wait…Annie isn’t gonna pay?”

“Nothin’ really. It won’t change your plans or anything, but I need you to haul a little more than the trailer.”

“You…uh…you know Courtney’s been staying with her parents for the last few months, right?”

“Why would I know that?”

“She got divorced last year, even changed her name back to Habberman.”

“Good for her. I’ve never known her, Jake. We haven’t spoken since that day in the south lot. What she has or hasn’t done is none of my beeswax. If you want to send some of her stuff down, just chuck whatever fits in the back of my truck. I’ll strap it down.”

“She’s coming back to marry Trent Petrova. I need you to bring her back up.”

Lightning could have struck me at that moment, and I wouldn’t have noticed. Time and space seemed to contract into a bubble around me at the thought of Courtney Habberman sitting in the passenger seat of my truck.