Winter and His Twins (MMM)

Winter and His Twins (MMM)

4 CHERRIES: "Who could ever imagine that getting beat up and left with casts on both arms could be the best thing that could ever happen to you? Winter Ryan might be having a run of bad luck when it comes to boyfriends but when he asks his sister for help he gets double his pleasure in the form of two very sexy twins. I wished I was Winter. This story had a new interesting element to it being that the Sullivan family are Irish wolfhounds and seem to only have twin boy offspring. Like most shifters they mate for life. I’m a fan of romance stories that have a sexy hero and in this story we get two. Identical twins they might be but they have completely different personalities. It’s nice that the author made each man his own person. When it comes to caring for Winter each has their own strengths they bring to the relationship. Garrett and Hawk come to Winter's rescue and immediately the sexual attraction is leaping off the pages. Yes Winter is getting over being beaten but the pull he has for the twins is undeniable. Both men are loving and caring with Winter so the fact that this man just suffered a trauma didn’t take away from the budding love growing between them. The story has several steamy sex scenes that will leave you fanning your face. Winter and his Twins is a short story and a very fast paced read. There are internal struggles for Winter when it comes to having a boyfriend let alone two. Plus moving to a new town where he meets his mates' family has Winter on edge at first. Sanctuary is a perfect name for this hidden away little town because it becomes a safe haven for Winter. The author weaved together personal struggles with just enough love and compassion to make an exciting love story. Winter and His Twins is a delightful read that I highly recommend." -- Coreopsis, Whipped Cream Reviews

4 NYMPHS: "The second book of the Welcome to Sanctuary series is a fast paced story. Winter and His Twins follow Spring’s brother as he recovers from a beating and his move to Sanctuary. Domestic violence and stalking are an everyday problem for some and the way Winter’s ex behaved is a familiar story. The author does have a sense of humor, which shows up unexpectedly in the story. While I don’t read a lot of male/male stories, those that do will want to add this series to their bookshelf. I recommend you read all in order as the first book gives some more background about Garrett’s and Hawk’s family." -- Amazon Nymph, Literary Nymphs Reviews

"A relationship becomes a nightmare when Winter is badly beaten and he ends up in the ER. Shaken up by the incident Winter calls his older sister Spring for help. She sends the younger twin brothers of her twin lovers. The moment Garrett and Hawk Sullivan arrive at Winter’s home they know that he is their mate. Though Winter is drawn to the twins he is understandably leery of starting something new. It’s going to take some tender loving care from Garrett and Hawk to convince Winter that being their mate for the rest of his life is going to be wonderful. The first order of business of course, after some hot loving, is too share their secrets, such as Winter telling the men that he has a successful career as a gay romance author and the twins need to let Winter know that they are Irish Wolfhound shifters. Guess it’s time for a little show and tell. Winter and his Twins is a hot and heavy sexual romp blended with a light and tender love story. Winter’s gone through hell and has the breaks and bruises to prove it, while Garrett and Hawk are sweethearts who are thrilled to find their mate at last. Their love is special and oh, so steamy. There are however a few minor inconsistencies, such as the ex not being arrested for assault. Regardless, Winter and his Twins is a fast and fun romance." -- Lisa, Joyfully Reviewed

More From Welcome to Sanctuary

Winter and His Twins (MMM)
Cooper McKenzie
In Shelf
$4.99

Thanksgiving in Sanctuary (MFM)
Cooper McKenzie
In Shelf
$4.99
All Books In Cart
All Books In Bookshelf
Excerpt

His mates were still sleeping, having rolled onto their backs, each sporting an erection, the sight of which made his mouth water in anticipation. Crawling back onto the bed, Winter maneuvered himself between their thighs. Taking Hawk’s cock first, he licked up the underside before taking the hard length deep into his mouth.

He heard Hawk moan just before fingers combed through his head.

He bobbed up and down several times before licking across the head and releasing Hawk. That earned him a whining, wordless protest as he turned and gave Garrett’s cock the same attention. He wasn’t surprised to receive the identical response from the other man. They were, after all, identical twins.

He moved back and forth from cock to cock several times before sitting up and looking at the two men who were now very much awake.

“Like we couldn’t tell,” Garrett returned with a laugh.

Both men groaned when he reached down with his fingertips and began to play with his own cock. Then in a move so fast he could barely take it in, Garrett pulled him up and turned him around, so he lay on top of him.

“Up on your knees, baby, but don’t hurt yourself,” Hawk instructed as he climbed from the bed.

Winter got into position, bending his knees and resting his bandaged forearms on either side of Garrett’s hips. A moment later Hawk repositioned them so that Winter’s knees were resting on the bed, but his lower legs were hanging off.

“Oh, fuck, he’s got a plug in,” Hawk muttered after brushing one finger down the cleft between Winter’s ass cheeks.

“Yes, you did, didn’t you, baby. Relax and we’ll work all that horniness out of you,” Hawk said as he gently pulled the plug out and brushed the head of his cock over Winter’s hole.

“At least for a little while,” Garrett added, his voice muffled by Winter’s cock in his mouth.

Winter moaned and then turned back to Garrett’s cock. Unable to hold the cock and himself up he licked his way around the head then lifted it by taking just the head between his lips. He sucked in a breath when Hawk gently pushed his way through the outer rings of muscle before sliding deep on the first stroke. Pulling out, his next thrust seated him fully inside. The sudden full feeling caused Winter to moan around Garrett’s cock which then had Garrett moaning around his in response, sending even more waves of arousal shooting through Winter.

Then Garrett pulled Winter’s cock from his mouth. “God, that’s a beautiful sight, your cock sliding in and out of our sexy mate,” he said before licking and nibbling his way up and down the length of Winter’s cock.

Hawk held his hips and began a slow, easy stroking in and out. Garrett matched the rhythm and Winter did the same, gently sucking Garrett’s cock, his tongue bathing as much of it as he could.

With men attending to both cock and ass, his need for more quickly grew.

He wasn’t sure the man heard him since he still had cock in his mouth until Hawk tightened his hold and began moving in and out of him at a steadily increasing rate. He sucked harder as well, taking Garrett as deep as he could and swallowing as well.

“Oh, God, me, too,” Garrett added, reaching between him and Hawk and rolling his balls with gentle fingers. 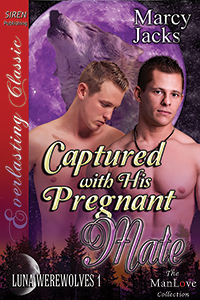 Captured with His Pregnant Mate (MM)
Marcy Jacks
In Shelf
$5.50
Tweets by
sirenbookstrand