All of her life, Elizabeth Sidham, 20, has dreamed of one day marrying into one of Britain’s elite families. It had been Elizabeth’s mother’s wish, too, even to her dying day.

When George Arbuthnot invites Elizabeth to a dinner dance at his family’s manor house, she believes that finally, her dream might come true—for he “belongs.” He is “one of them”, a member of the British Peerage.

George courts Elizabeth, encouraged and guided by his domineering mother, Catherine Arbuthnot. She is determined that he produce an heir—albeit that he has a predilection, one such that he might never marry. But that is a subject, neither mother nor her only son talk about. At his Mother’s coaching and insistence, George woos Elizabeth and the two are married.

After their honeymoon, the couple move into Heathwood Manor, the ancestral home. George’s best friend, William, who is always in the background and often present, promises to “always be a support.” And he is, to both George and Elizabeth.

But so, too, is Catherine, who still controls George’s life. She is eager for him and his new bride, to produce an heir. And dutifully, within the year, the couple have a baby, Young Will.

The birth is difficult, and Catherine, soon takes control, insisting her young, daughter-in-law keep to her bed. Catherine busily begins making plans for her grandson, the schools he will attend, the life he must live. It matters not what the couple want. Catherine knows best.

George and Elizabeth feel helpless at the domineering mother and mother-in-law’s plans. But George’s friend and secret lover, William, knows he can’t stand by and let his surrogate family suffer. He has promised himself he will be there for them . . . always. And he makes plans to fulfil this promise. 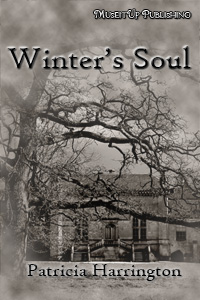 I’m drawn to the graceful black swirls on the envelope, all tall loops and curves and dashing punctuation. They deserve tracing, but my fingers tremble. Lightly, I touch my name, Elizabeth Sidham. Breeding flows in every line. Mother would have so admired it. With the reverence reserved for a holy day, I touch the embossed seal on the flap. The ochre, gold and purple colours are hues of light caught on the armour of knights from ages past. I tenderly carry the stiff vellum invitation into the kitchen to find the brown-handled paring knife, not the serrated one. I must leave the seal intact to show Melissa at work.

I am having a weekend gathering, the twelfth of this month, and would be so pleased if you could come. Dress is casual, although we shall have a small, formal dinner dance on Saturday night. Details and arrival times by train are included. Please let me know by return letter if you will need transport from the station.

George Arbuthnot
I hold the invitation against my breast. “I’m going to a mansion in the country.” After all, the Arbuthnot family is in Burke’s Peerage.