The world is coming to an end. Allan is pretty sure that's the only explanation for the rain of salt that's been falling for days, killing people in the streets with its insidious power, spoiling the earth, and bringing Armageddon on a bit sooner than everyone expected.

Knowing he'll probably die empowers Allan to quit his job, break up with his cheating boyfriend, and even put his fear aside when he meets Ricky, a mysterious man with a gun.

They connect in a way that makes him sad that the end of the world is so imminent. A few lusty moments seem to be all they manage to steal ... until the morning.

NOTE: This story appears in my print collection "Other Worlds Than These." 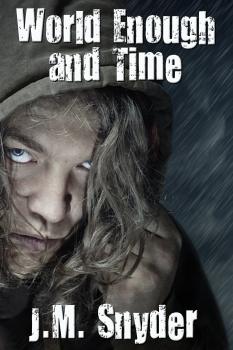 Cocktail Reviews: 5 out of 5.
"What a fabulously refreshing change! Snyder has penned a tale about the end of the world, but not in the usual way ... Honestly, what a brilliant read. Well written, and well enjoyed by this reader. Fantastic!"

Coffee Time Romance: 4 out of 5.
"What a wonderful creative mind this author has. This story is captivating and intriguing. It will make you think about what you would do if it were your last days on earth."

Fallen Angel Reviews: 4 out of 5.
"Allen and Ricky have given up hope until they meet one another and suddenly they find something to live for. Even though they think their time is short they want to spend each and every moment to the fullest, pleasuring each other. Thanks go to Snyder for another look into a future where in spite of circumstance, the human spirit is unbeatable."

Joyfully Reviewed:
"The atmosphere of the story is mostly sad and grim, but J.M. Snyder does a great job of adding hope and other positive emotions to the mix. While this story may seem dark, in the end it’s a fascinating and fulfilling tale."

Literary Nymphs: 4.5 out of 5.
"With the rapid decay of a dying world as a backdrop, Snyder weaves an emotional tale of trust, passion and the will to survive. This fast-moving storyline provides plenty of interest to entertain readers from beginning to end."

Rainbow Reviews: 4 out of 5.
"The dystopian future in which they meet may be our own. Yet the overall tone is positive and life-affirming. The sex scene between Allan and Ricky is hot and tender and the story will leave the reader feeling happy and uplifted."

SexyReads Reviews: 7 out of 10.
"I found the ideas behind this book very well thought out and the characters are brought to life in a way I've not seen in other short stories ... with sex of the hot and tender variety ... Definetly worth checking out. "

Two Lips Reviews: 4 out of 5, with a "heat level" of 1.5 out of 3.
"A charming and touching story that despite its gloomy setting will leave you with a smile on your face and full of hope for the characters."

I waver at the crackers, undecided between a box of saltines and a box of unsalted tops. Hmm ... it's almost like a bad joke, isn't it? Beside me someone reaches for the saltines and I look up from the slim, strong hand to a young, boyish face framed with neat black hair along the jawline and around the chin. The hair that curls from under his baseball cap looks like spilt ink against the burnished gold of his skin.

Great, I think as I stare at him, the smooth hair lining his face, the full lips, the dark eyes. I've been searching for someone like you my whole life and when I finally find you, the world's about to end. Just my luck.

He glances at me with a slight frown on his face. "Hey," he says, a little too loudly. He takes in my lips, my eyes, my hair, and then back to my mouth because I run my tongue over my upper lip unconsciously. He's quite cute. And young, too, not as built as Hans and Frans outside, and I know I'm staring but so what? A few more weeks it won't matter anyway.

A few more weeks and we'll both be dead.

He takes a step back from me, still frowning. "You okay?"

"Fine." I smile a disarming grin and hope he doesn't run, not now, not when we've just met. I force a laugh and that makes him smile, too. "Well, except for the salt."

"Yeah," he says, a breathless rush. I'm just about to say something else, something I hope is witty enough to get him to come back to my place and lie in my bed with me, we can take in the end of the world together, when he turns away. Apparently I'm not that interesting to him.

Or he's got other things on his mind, because he looks towards the front of the store where the cops stand, and then back at the shelf full of Cheez-its and Ritz crackers and Little Debbie snack cakes. He pats at his back pocket like he's feeling for a wallet and then bends down for something on a low shelf, and that's when I see the gun shoved into his jeans. It rests along the small of his back and his shirt pulls up just enough for me to get a glimpse of cold, hard steel; then he stands again and it's hidden from view.

This time when he smiles at me, I'm the one to take a step back. He's got a gun.

"Take care," I tell him. I hope he's not thinking I saw the gun but I'm hurrying as fast as I can from the aisle without trying to look suspicious, and I wonder if he's going to pay for whatever it is he's getting or if he's going to hold up the cashier or what. Then I tell myself I don't care, I'm just here for some frozen Bagel Bites and a pan of Healthy Choice lasagna and that's it. I'll think about him later, when I'm alone and lying in my bed and touching myself, thinking I'd rather have him with me, but he has a gun so I'm not even going to ask. These may be desperate times and he may be sexy as hell, but I'm not that desperate.

Fire of the Four Seasons (MMMMM)
Scarlet Hyacinth
In Shelf
$1.99
Tweets by
sirenbookstrand