Jax has always succumbed to his boss’ wishes in an effort to please him. When he is asked to journey to the town of Tellare with a volcanic ash cloud standing in his way, Jax realizes the dangers, but he accepts the job anyway. He even brings along his friend Stu as company. However, Jax starts to regret his decision when Stu puts up resistance and conditions continue to worsen. What awaits them inside the ash cloud, and will Stu prove to be a liability when push comes to shove? 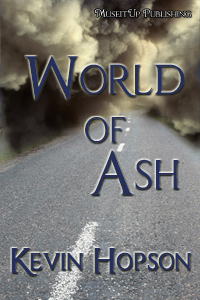 This is a tightly-woven, scary short story that was impossible for me to put down once I read the first sentence. I was absolutely there smelling the sulfurous fumes along with Jax and Stu. The creep factor escalated until my skin was crawling by the time I followed the two young men into their other-worldly nightmare. This story provides a captivating short escape into the terror of the unknown. Night Owl Reviews - 4.5 out of 5 review
http://www.nightowlreviews.com/nor/Reviews/Laurie-J-reviews-World-Of-Ash-by-Kevin-Hopson.aspx

Jax and Stu walked silently behind Robert as they made their way toward the house. Because the ash accumulated on flat surfaces, such as the roof and ground, the house’s exterior was visible to Jax. The off-white building had soft green shutters and rested at the end of a gravel driveway. He could not see the driveway, but Jax felt the uneven stones beneath his feet. Despite the ash buildup, Jax could make out a storm cellar on the right side of the structure. Directly in front of them was a covered wraparound porch. Jax wondered how the house, as old as it was, could hold up under all of the ash fall.